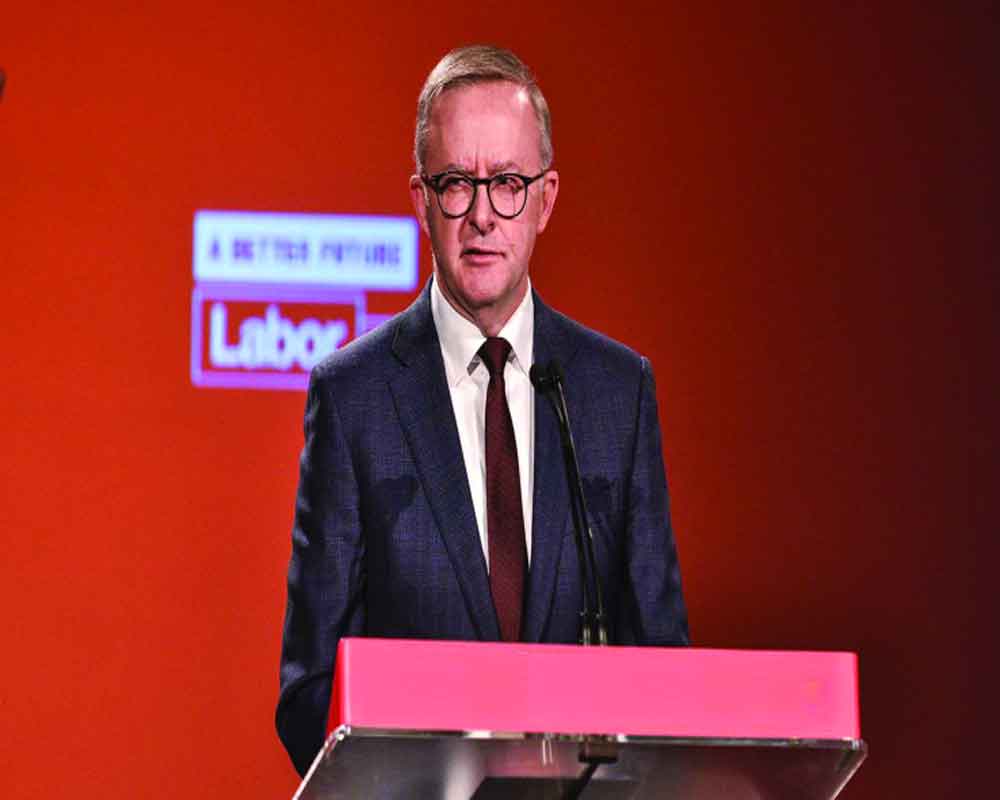 The new Australian Prime Minister has consolidated his position within the Labour Party over years, and he well understands India’s relevance

Australia has voted for change and elected a new Prime Minister, Anthony Albanese, Member for Grayndler in New South Wales since 1996. Nicknamed “Albo”, his substantial rise in the party eventuated under Kevin Rudd’s Kevin07 dispensation in which he was given a ministerial position. In the 2010 hung Parliament, Albanese was also instrumental in securing the support of independent members when the Government was shy of the majority mark. After the drubbing in the 2013 elections, when the Australia Labour Party chose Bill Shorten over him as the leader, he secured the Deputy Prime Minister’s position.

Subsequently, following the shock defeat of the ALP in 2019 when Shorten resigned from leadership, Albanese became the party leader. There is no denying that Albanese took charge of the party in very challenging times and needed to unite its factions, restore public and business confidence in Labour’s policies and values and, most of all, consolidate his own authority as a leader — and he has done fairly well on all counts. The jury may differ over his leadership style, articulation and capabilities, but his political resume certainly testifies his credentials as a peace/deal-maker within the Labor caucus and in Parliament. Above all, he possesses a key virtue to be a successful political leader  patience.

Come 2022, biding his time, he backed his political convictions and after the initial gaffes in the media, brick-by-brick built his prime ministerial image in the public. He championed change in the way politics was conducted, inclusiveness in decision-making, compassion for the indigenous Australians and hope for the jobless. His promise to create a national anti-corruption commission is a big tick with the teals and also the Australian public.

His win was also aided by a strong anti-incumbency over rape and sexual misconduct; rising cost of living, fuel, electricity and essential commodities; stagnating wages, waning climate commitments and Scott Morrison’s delayed response in securing COVID vaccines and handling natural disasters. Most recently, ScoMo’s flip-flop response in dealing with the Queensland floods gave the ALP leadership in Queensland the much-needed ammunition to target the federal Government. Morrison’s mishandling of the Brittany Higgins’ rape allegations and assault allegations against his two parliamentary colleagues, Christian Porter and Alan Tudge, especially inflicted a severe beating to the party’s and his own public image, and last-ditch effort to announce Marise Payne as the ‘Prime Minister for Women’ proved futile in winning back women voters.

Albanese is likely to get a majority reaching 76, and thus escape teals (climate change activists) and the Greens breathing down his neck. He will have more space to manage the expectations of the resource industry and instil some moderation in climate policy and pursuit of “renewable energy superpower” status for Australia. In the post-pandemic recovery, the flagship resource sector is the key for GDP growth which the IMF has raised to 4.2 per cent in its latest forecast. The resource industry contends that more mines, minerals and metals are needed to build a modern society and boost economic growth and decoding this remains a challenging conundrum for the Albanese Government.

For New Delhi, bipartisanship in Australia’s India policy means the regime change would not disrupt policy continuity. In the wake of the Pulwama attack, new Foreign Minister Penelope Wong, then the Leader of the Opposition in the Senate, had condemned the “atrocious terrorist attack against security personnel in Jammu and Kashmir”. In April, Anthony Albanese, as the Leader of the Opposition, had also welcomed the “deepening of ties” and signing of the Australia India Economic Cooperation and Trade Agreement (AI-ECTA). In 2017, Albanese had led a parliamentary delegation to India to deepen parliamentary ties, people-to-people relations and understand the social, economic, governance and political issues. He concluded his visit brief by writing: “…it is important that the parliamentary officers work closely to ensure that Australian parliamentary visitations don’t wait some 17 years before the next visit.” The insights gained will prove useful now.

Albanese well understands India’s relevance which has been elevated to 63rd in ‘doing business with ease’ rankings in the World Bank’s Doing Business 2020 Report, making it the sixth fastest growing economy, surpassing France. It is now the ninth largest recipient of Foreign Direct Investment destination in 2019 by the World Investment Report 2020 of the United Nations Conference on Trade and Development (UNCTAD). As per the Global Innovation Index (GII) published by the World Intellectual Property Organisation (WIPO), India ranks 52nd in innovation, improving from 57th in 2018, and topping the list amongst the Central and South Asian nations.

In market sophistication, India ranks 20th both in terms of ‘Ease of Getting Credit’ and ‘Market Capitalisation’; third in ‘Domestic Market Sale’ and sixth in ‘Ease of Protecting Minority Investors’. In business sophistication, India has jumped from 51st in 2018 to 27th rank, and 23rd in ‘University/Industry Research Collaboration’, something that should interest the academic stakeholders in Australia. India is a major success in Knowledge and Technology and ranks 1st in ICT services exports (as a percentage of total exports) and also ranks 22nd in the list of ‘Exporter of Creative Goods’.

As Albanese meets his Indian counterpart Narendra Modi in Tokyo at the Quad summit, both draw comfort from the fact that their strategic and bilateral interests cannot be seen in isolation. This means they can keep an eye on what happens between and around them, simultaneously.