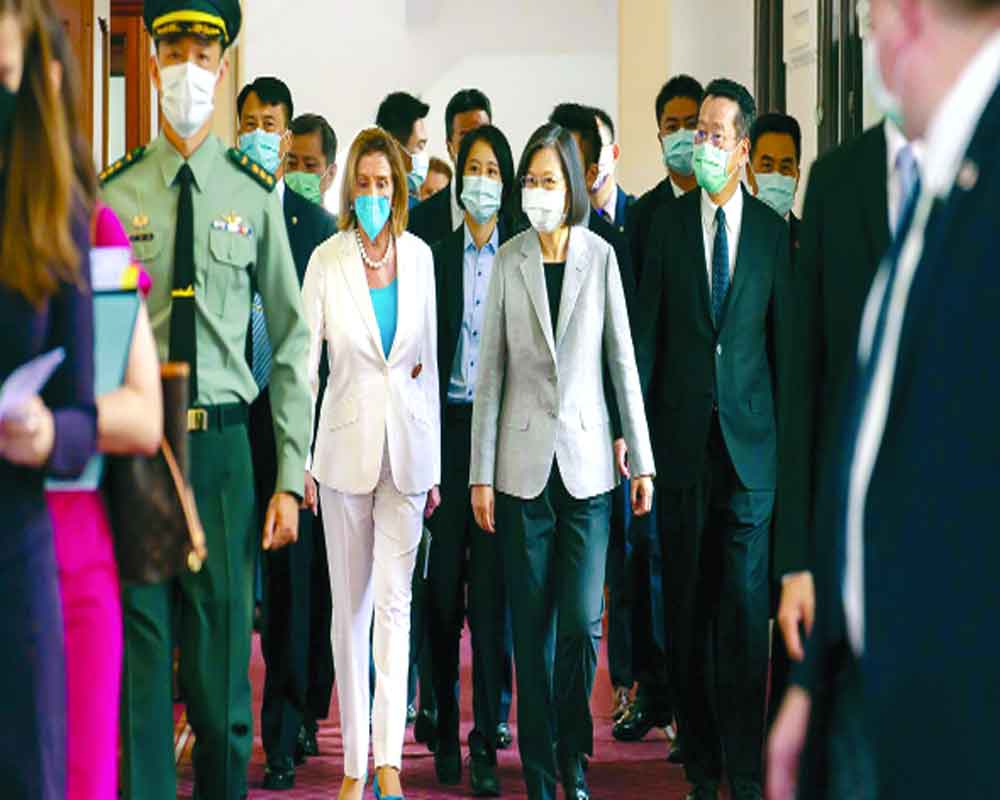 China's failure to intervene during the visit of Nancy Pelosi, Speaker of the US House of Representatives, to Taiwan, notwithstanding the threats dished out by the Communist regime, including President Xi Jinping, is a serious diplomatic setback for the country. Beijing's failure to act despite its dire threats-and this included threatening to shoot down the aircraft carrying Pelosi-is easy to understand but difficult for the Communist regime to explain. The Chinese leadership is not mature enough to play on the world stage, leave alone be any sort of world leader.

India and its politicians till recently had been treating the Chinese with far more deference than they deserve. The last war the People's Liberation Army (PLA), as the army in China is called, fought was against Vietnam in 1979, in which it was roundly defeated and chased out of Vietnamese territory. Thereafter, for more than 44 years, the PLA has been untested on the battlefront. On the other hand, the Indian army has participated in many an encounter in different terrains. Unfortunately, the memories of the 1962 humiliation continued to have a disproportionate influence on the Indian psyche all these years.

The PLA belongs to the Communist Party of China (CPC). Its soldiers serve only the party. A soldier can shed his blood in a spirit of patriotism, but to sacrifice his life to please his employer, in this case, the party is a difficult if not impossible proposition. In the early days of the Communist revolution, the men under arms might have been inclined to see class revolution as a cause, but such an outlook cannot be indefinite. This perhaps explains why the party did not expose its army on the battlefield. While India lost territory in the 1962 border war with China, the same Indian army, however, only five years later in 1967, performed admirably against the same enemy, forcibly throwing out the invading Chinese army at Nathu La. The Nathu La Pass today is India's territory. The critical element was leadership.

We should be focusing on the internal goings-on in China. Noted American columnist and analyst Gordon Chang tell us that China's economy grew by 0.4 percent in the second quarter of 2022. This particular statistic comes from China's National Bureau of Statistics. And according to many independent observers and commentators, China's economy has not only contracted but is also in a free fall. While the Chinese Communist Party claims that trade will lift China towards its goal of "around 5.5% growth" for the year 2022, as announced earlier; the actual growth is on a downward trend. This year's first quarter showed only a 4.8% growth, again China's official statistics.

The country has also seen massive protests over the decision by Chinese authorities to freeze the deposits of banks based in rural areas. the largest such demonstration by depositors demanding their lifetime savings, in Zhengzhou city in the country's Henan province, was violently crushed by the police. Runs on Chinese banks have become more frequent in recent years. Many banks have been accused of financial improprieties. CNN estimates that as many as four lakh customers across China were unable to access their savings in rural banks in the Henan and Anhui provinces. But these are manifestations on the surface of a much bigger problem.

Its decades of rapid growth, thanks to a single-party dictatorship have enabled China to reach the position of the world's second-largest economy (measured by purchasing power parity). Chinese investments are spread across the globe, and Beijing is pushing hard for obtaining influence in the Asian and African theatre by dangling the carrot of lucrative projects. Some of these countries indeed have fallen for China's ready-currency-no-questions-asked diplomacy, only to rue their haste later, as they have been enmeshed in China's debt trap. Chinese leaders want to absorb Taiwan and make the Western Pacific a Chinese lake.

But a closer look tells us that China's future isn't all that bright. Its growth had already slowed dramatically. Farmland and energy resources are becoming scarce while the country is already grappling with water shortages. Thanks to its forced one-child policy of the Mao years, China is approaching a demographic catastrophe: It will lose 70 million working-age individuals over the next decade while gaining 120 million senior citizens. From the US to Taiwan, India to Japan, democracies are kicking Chinese firms out of their markets and creating multilateral coalitions to check Chinese expansionism. Also, China cannot ignore the surging anti-Chinese sentiment abroad.

If China's troubles make it less able to fulfill its dreams, the world must prepare for a more dangerous China. History tells us that such powers attempt to reshape the balance of power before the window of opportunity closes. Taiwan is the most likely target of this Chinese anxiety.

Till China was rising, it was content not to force the issue and tried to entice Taiwan through peaceful means. But the Taiwanese do not want to be ruled by a genocidal dictatorship. After all, which freedom-loving people would want to?