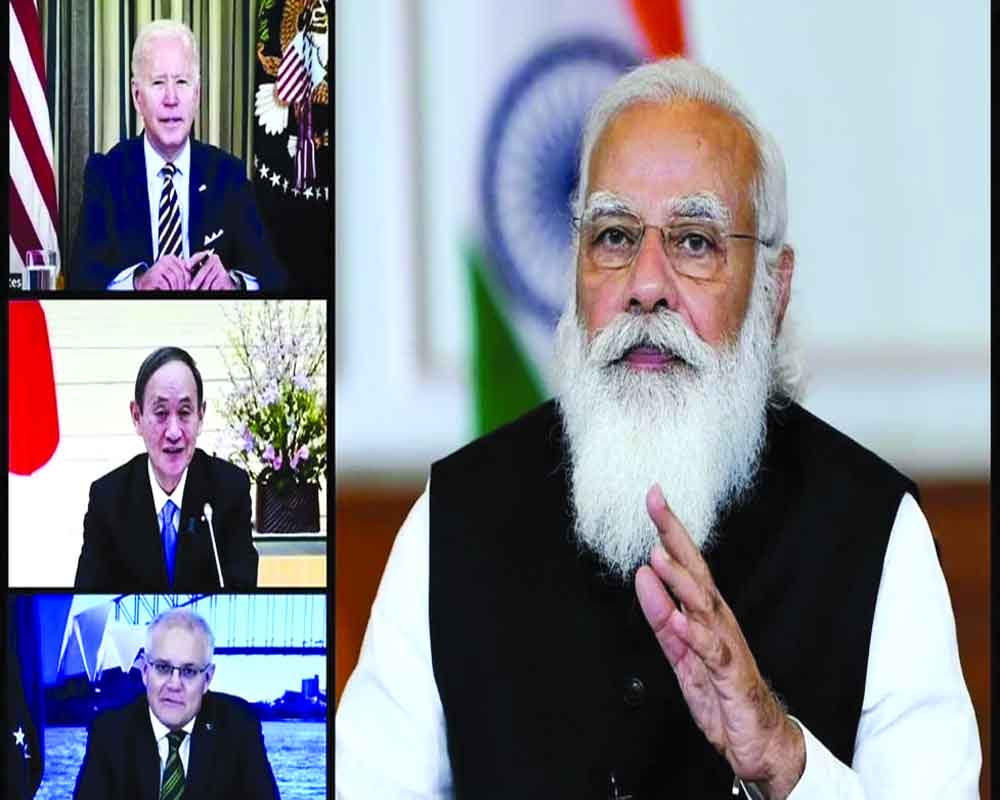 The logic put forward by various experts regarding Quad and BRICS as opposing groupings should be seen differently and from an Indo-centric perspective. Indeed, Quad is centred on the Chinese belligerency and focuses on the Indo-Pacific region. BRICS speaks volumes on various issues from the developing world’s perspective and has Russia and China as prominent members. Strategic partnerships and multilateralism should be parallel to each other as both are critical geopolitical markers for a comprehensive foreign policy. One should appreciate that India’s participation in both overlaps the objectives of multi-alignment and multilateralism. India stands with a firm commitment to the advocacy of multilateral diplomacy, with the objective of reforming the UN to face new global challenges. Prime Minister Narendra Modi’s decision to attend the BRICS summit virtually is a testimony to these efforts.

So how does India’s multilateral policy have a convergence of objectives with the multi alignment policy? The multilateral policy projects India’s soft-power approach to handle contentious geopolitical issues. India’s emerging role and contribution to the New Development Bank (NDB - BRICS Bank), which support projects in areas such as clean energy, social safety, public health, etc., indicate India’s priorities. On the other hand, the multi-alignment policy ensures continued support of both the US and Russia on various issues such as the reform of the UNSC and a vital distinction between internal and international issues. Both the policies seek to overcome the trust deficit and the resultant crisis of international cooperation with the larger objective of India’s external security insight.

From a geo-economic perspective, China’s debt-trap policy jeopardises the recipient’s sovereignty. The case of Sri Lanka has only highlighted it. Thus, the Lankan experience has made it imperative for the Afro-Asian nations to look towards India for multilateral as well as bilateral aid through NDB and other Multilateral Development Initiatives such as the Asia-Africa Growth Corridor (AAGC), an Indian-Japanese collaborative vision regarding development, connectivity and cooperation between Asia and Africa that was announced in 2017. The NDB has a geographically global scope, enhancing India’s standing amongst the developing countries. The test for the success of India’s foreign policy lies in cooperating with the development partners without letting the core security objectives being jeopardised. To put India’s multilateral diplomacy at stake because of China’s aggressiveness or the Sino-Russo grievances against the West would harm India’s credibility and fulfil China’s ulterior motives of restricting India to South Asia. Thus, in light of the above arguments, India’s virtual presence will ensure ‘presence’ and be an excellent diplomatic response to Beijing’s strategies to sow dissent amongst the Quad members. Further, a critique of Indian aid might argue on the thickness of the cheque-book that India and China have, but, given the long-term intentions and respect for sovereignty, India scores much higher than China. Also, India’s initiatives to convince the IMF to bail out Sri Lanka will encourage others like Nepal and Sub Saharan African countries to be more open to various international donors, thereby denting the Chinese strategies and furthering the promotion of the liberal world order.

A multilateral approach, either through the BRICS or Asia Africa Growth Corridor (AAGC), will ensure intentions being translated into confidence that can result in India’s favourable position as far as the reforms of the UNSC are considered. One can recall that in 2010, despite the best attempts, India was unable to get even a two-thirds majority of UN members for the purpose mentioned above. Through various agencies, India’s multilateral and bilateral aid might have a payoff of gaining those critical votes in India’s favour. The MEA should not hesitate to put India’s expectations across the recipient nations in geopolitics and geo-economics.

Further, evolving issues such as the COVID-19 pandemic and economic recovery have huge potential for India. This is particularly important given that geopolitically one can foresee more pandemics in the future. Already India’s credentials in vaccine diplomacy have been established. Recently, in March, BRICS Vaccine R&D Centre was launched through which India will explore initiatives in joint research and development of drugs and vaccines. Indian scientists involved in such Projects can make the country proud in other multilateral platforms. Moreover, such participation can also help develop vaccines and medicines for the country, apart from identifying mutual priorities with other nations.

Nevertheless, BRICS never encourages deliberations on the bilateral issues concerning Russia and China with the West. BRICS is not a platform for a strategic alliance, but an international cooperation mechanism wherein developmental issues dominate discussions and decisions. There have been instances where India and China have cooperated despite disagreements and bilateral issues as both had a shared vision of a new global economic order. Previously, the US acknowledged mushrooming the various “hubs of power” and their respective “networks and coalitions in a multipolar world”. Similarly, there have been instances when China and the US have cooperated in multilateral institutions despite their rivalry. The US recently had called for the new issuance of Special Drawing Rights worth $650 billion in the IMF. As China supported this demand in the IMF and is not an isolated case wherein multilateral cooperation remains unaffected, India should not hold its multilateral policy a hostage of a Thucydides trap between the US and Russia-China. Thus, India should confidently pursue both policies simultaneously and set limits to its cooperation in case of open hostilities from the side of China. Overall, the international community has a very positive outlook towards the new multilateral institutions, for they had given a hope of cooperation that could have helped the world in terms of bringing the countries closer to each other.

Unfortunately, that ‘moment’ is rapidly running down fast, given the continuation of a Chinese aggressive behaviour towards India and Taiwan apart from the ongoing Ukrainian crisis. With no signs of an upcoming peace, Russia and China may utilise the platform to reiterate an anti-West stand. Modi’s decision regarding his physical presence is well comprehended from this perspective. The initiatives taken by India through various multilateral forums are somewhat similar to that of Japan in the early 1950s when it first initiated ODA through the Colombo Plan. It had treated its participation in various regional and multilateral institutions as platforms first to enhance its geostrategic outreach and second to counter Beijing’s influence and power. It was parallel to its military security being taken care of by the US owing to its n- war clause Article 9 of its constitution. Thus, it was a mix of “entrenched bilateralism” and “incipient multilateralism”. Washington’s support to help Japan become an important regional player through Asia-Pacific Economic Cooperation (APEC) and the ASEAN Regional Forum (ARF) has been well established. In terms of a differential approach, India has strategic partnerships with the US and its allies through Quad but has not formally committed itself to any security alliance, is an active importer of the Western and the Russian arms and seeks to pursue indigenous production in the defence sector. It has maintained its strategic autonomy on critical issues and increased its leverage vis-a-vis the other essential powers. Thus, the current foreign policy is a blend of multi-alignment and multilateralism, which is strongly tied to the commitment of Atmanirbhar Bharat to the defence sector and hence requires a strong support.