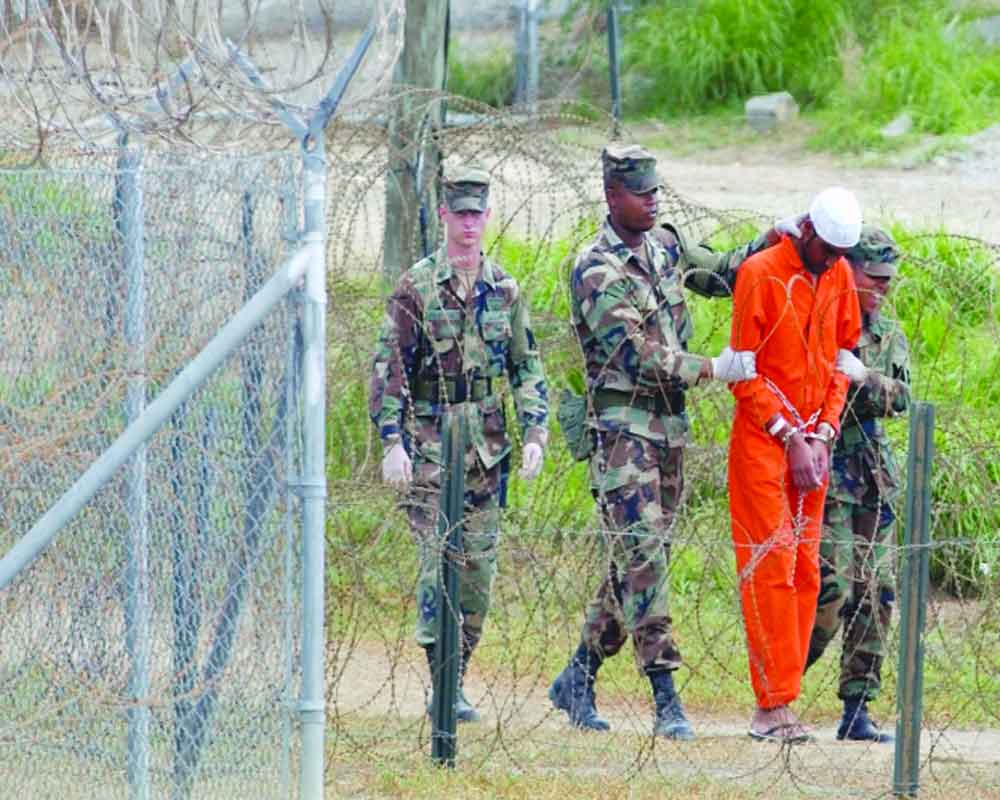 It’s high time US President Joe Biden closed the books on the Guantanamo Bay prison which is infamous for its unrelenting human rights violations. The continuation of the Guantanamo prison is an insult to American democracy and the liberal ethos that Washington has been preaching to the world for decades

The infamous Guantanamo Bay military prison completed two decades of its operations this January 11, 2022. Many say that this secret jail is truly an ethical failure of the American justice system. Besides, the last twenty years in Guantanamo have been a catastrophic legal misstep that is bringing home more problems and disgrace than credible solutions. It is increasingly becoming a symbol of torture. The military prison in Cuba is now left with only 39 inmates. During its peak time, it housed nearly 800 prisoners. Indeed, some media reports say that it is symptomatic of CIA-sanctioned torture cells carried out in stealth. Today another critical question looms large over the Biden Administration: Is it worth guarding 39 prisoners with one of the most sophisticated ring of 1,500 commandos? It is felt that the taxpayers’ dollars must be spent judiciously at a time of global pandemic like the Covid-19.

The Guantanamo detention camp, also called Guantanamo Bay, Guantanamo or Gitmo, is in the Southeastern part of Cuba. The horrible prison is located at the Guantanamo Bay Naval Base of America. It was created by then US President George W Bush in the year 2002 after September 11 terror attacks on the country. And the prison was especially designed to host the inmates who were caught as a part of the Global War on Terror (GWOT). Though the prison was first used in 2002, the American Government has been maintaining a military naval base there since 1903. Interestingly, the original prison was named Camp X-Ray. In fact, after the terror attack on September 11, the prison facility was made ready for immediate use in just 96 hours. Shortly after the Bush administration dethroned the Taliban Government headed by Mullah Omar in Afghanistan, the facility came into being as the most secure prison. The first batch of detainees was brought to the prison on January 11 the very next year and they were classified as “enemy combatants”.

Most of the inmates of Guantanamo Bay were from those nations who were either a part of the GWOT or those who had helped harbouring terrorists. Precisely, the majority of them belonged to the countries of West Asia. The worst part of the Guantanamo saga was that these prisoners were captured on foreign soil but were not charged on any particular crime. Further, they were detained in this secluded prison for an indefinite period and were denied access to any legal counsel. Another important point to be noted here is that the GWOT is not an official war as there was no declaration of war by the US Congress. On November 13, 2001, barely two months after the terror attack, President Bush announced a military order, officially permitting these actions: it authorised the detention and trial by the Military Commission of any current or former member of the al-Qaeda and anyone who aids or abets its work or harbors its members. Thus, the GWOT has no scheduled end date, and it has handed down an indefinite mandate to the powerful armed forces to carry out the operation as long as the real culprits are not held. And when Osama bin Laden, the brains behind 9/11, was killed by American forces in 2011 during the Obama administration, in a way, the biggest milestone of the operation was already achieved.

Now, America’s withdrawal from Afghanistan was completed last year by handing over the reign to the same Taliban, the butchers against whom America and other liberal nations fought for nearly two decades. Now, there is no point of maintaining the Guantanamo Bay. In fact, the terror has come home all the way. It is ubiquitous now.

Now, the most pertinent questions are: Why Guantanamo was chosen and why is it still open? First of all, the US strategic experts and security agents wanted to keep the global terror suspects outside the purview of public and, most importantly, the constant media glaze. Also, when they are housed far away from the US mainland, these detainees will not be able both to demand and enjoy the protection of rights under the country’s justice system. Another critical point to note here is that the 117-square kilometre base had enough space and facilities to hold the prisoners for a long time. Many human rights advocates say that this Bay is not technically a part of the US territory, but rather an “island outside law”. Second, it is still open as there are tough Congressional roadblocks to close the jail.

Global experts condemn unrelenting human rights violations at Guantanamo Bay. The detention centre is internationally known for its human right violations committed there. The saddest part is that the international community has failed to discharge their responsibilities to get the prison shut by using pressure on the successive US Government since 2002 or by enforcing international human rights obligations. Rights advocates say that the American actions at the prison violate its obligations under the Third Geneva Convention, the International Covenant for Civil and Political Rights (ICCPR), the Convention Against Torture (CAT) and the customary international law. It is widely recognised that violations at Guantanamo Bay include illegal and indefinite detention, inhuman conditions, torture, unfair trials (military commissions), etc.

Today, the prison has become a symbol of American injustice and torture. In a nutshell, Gitmo was prepared just to torture the detainees, mostly belonging to the al-Qaeda and the Taliban. Today, this island prison bears the testimony of what many call the first war of the 21st century. This war was a different kind of a war against a different kind of enemy. The GWOT highlights the fact that the enemy is not a nation, but the enemy is massive global terror network that threatens the way of life of all peaceful people.

Frankly speaking, it is clear now that there had been and also continues to have flagrant violations of international human rights of the detainees inside the prison complex. As the prison has been kept completely out of global media glaze, a very few of the tragic incidents that took place inside were brought to the notice of the outside world.

The maintenance of Guantanamo Bay prison is an insult to American democracy and the liberal ethos that Washington has been preaching for decades. President Biden can finally put an end to the extra-judicial and abhorrent system that has existed in Guantanamo for the last twenty years. If one flashes back and observes, they can single out how different US Presidents attempted to deal with the Guantanamo crisis differently after the exit of Bush in 2009. Barack Obama, a Democrat, who took over the reign from the Republican Bush, indeed pledged to shut it down during his first campaign for office. During his electoral march, he once said: “In the dark halls of Abu Gharib and the detention cells of Guantanamo, we have compromised our most precious values.” An eloquent speaker as he used to be, but he found it too difficult to put an end to the tragedies of the prison. Even though he signed an executive order to close the prison within a year, he failed to do so. Sadly, the Congress maintained such restrictions that barred Obama from closing the prison in the first two years of his time in office. And these two years have recorded a Congress, largely controlled by the Democrats. Interestingly, liberal veterans like Bernie Sanders and Elizabeth Warren voted against easing Congressional restrictions in the Senate in the year 2013. But Obama reduced the number of inmates from 242 to 41 during his tenure, by transferring some of them to the United Arab Emirates. When Donald Trump came to office, he maintained the status quo.

Is there any hope that Biden will be able to close down the prison? At present, the Democrats have a razor-thin majority in the Congress. And this is the only golden chance to bring an end to Gitmo, which Obama miserably failed despite his tall promises. If Biden wants to do something on the issue, first he must repeal long-held restrictions on shutting down the prison as the US Congress brings two legislations each year, namely, an annual defence authorisation bill and a Government spending bill. These are legal hurdles that Biden needs to overcome at the moment.

On record, Biden has also pledged to close Guantanamo. But the irony is that those Congressional impediments that prevented Obama are still in the books. However, Biden should give a final push. He must not postpone. This collective scar on American democracy should be buried with full presidential might and by taking all legal nuances. Hope, Biden, a matured and a patient listener to the woes of the world, would be able to fix the rights problem.