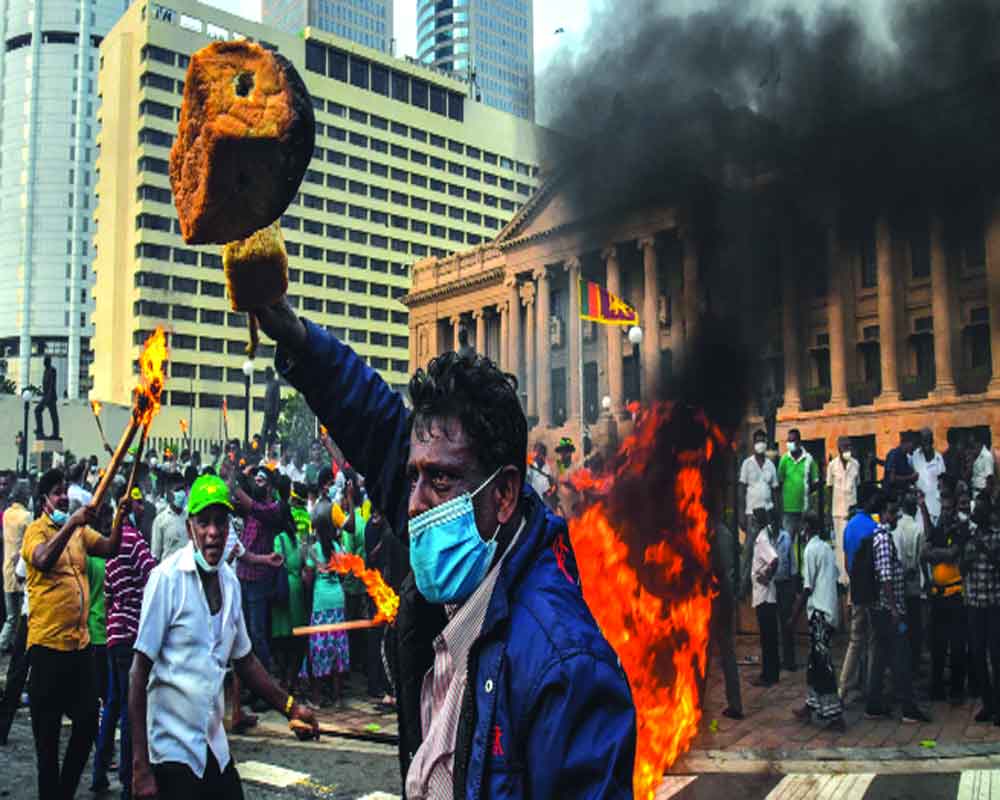 Sri Lanka is facing its worst economic crisis since its independence. It is in dire need of foreign exchange reserves to repay the past debt and import essential goods. There is a state of chaos with power cuts extending upto 12 hours, a shortage of essentials in hospitals, a lack of paper to conduct school examinations, and no fuel at gas stations. From 1983 to 2009 the 25 years of civil war in Sri Lanka caused a massive impact on its foreign exchange reserve. The war was predicted to have cost $00 billion which is nearly five times as much as the Sri Lankan GDP (2009). The shortage of foreign exchange reserves in the country is due to the short-sightedness of the ruling Government. Sri Lanka has a huge public debt of about 110 per cent of its GDP. The Sri Lankan rupee has gone to a record low value against the US dollar. This is due to large tax cuts by the government, which affected government revenues and fiscal policies. To cover the deficit in the budget the government started to print more money, which further increased its inflation rate from 15.1 per cent to 18.7 per cent. Sri Lankan rupee was 299.95 vs US dollar on April 5, 2022. Experts conclude that the country’s higher imports of essential goods (sugar, pulses, cereals, and pharmaceuticals) are one of the reasons for the falling foreign exchange reserve. In 2019 the then newly-formed government promised to revive the growth of the Sri Lankan economy and reduce Value Added Tax (VAT) on the ground that a lesser tax rate would attract more consumer expenditure which would pay the incurred deficit to them. But the pandemic disturbed the cycle of increasing consumption expendi-ture and led to a failure of tax cuts in VAT.

This caused a severe reduction in govern-ment revenue. In April 2021, in order to revive the falling foreign exchange reserve, President Gota-baya Rajapaksa announced a complete shift to organic farming banning all chemical and inorganic fertilizers. A part of the nation’s economy is spent on importing chemi-cal fertilizers. Instead, it caused a negative effect on the economy, causing huge eco-nomic losses. The decision toshift  organic farming in the coming decade was a good idea but the overnight shift impacted negatively. Transforming the production of tea and other agricultural products to organic farming led to lower yields that resulted in a loss of $425 million. Sri Lanka which was self-sufficient in rice production ended up importing rice within six months. Tea was a major item of export which contributed 16.57 per cent of total export income, but no longer. Negative effects on the economy, continuous protests and rising food prices made the government reverse its decision in November 2021. The Easter Sunday bombings in 2019 and the Covid pandemic led to a downturn in tourism that accounts for 12.9 per cent of GDP. The sector didnot show any signs of recovery till November 2021, when the government removed the quarantine meas-ures for vaccinated visitors. The war between Russia and Ukraine further accelerated the weakening economyas 25 per cent of the tourists come from Russia and Ukraine. Sri Lanka is also facing a labour shortage. In 2018, Malik Fernando, head of the industry body of the Tourism Skills Committee said the country needs 100,000 more tourism sector employees within the next three years.  At present, Sri Lanka has $2.3 billion foreign reserves. This is insufficient to pay for-eign debt obligations of 7$ billion and the International Sovereign Bond (ISB) payment of $1 billion for 2022. The World Bank, however, hopes the economy will revive although there will be many challenges.

(Gupta is Assistant Professor, Department of Humanities and Management Science, and Kansal is in the Computer Science First year, Madan Mohan Malaviya University of Technology, Gorakhpur. The views expressed are personal.)