Deuba’s visit to rev up ties with India

Deuba’s visit to rev up ties with India 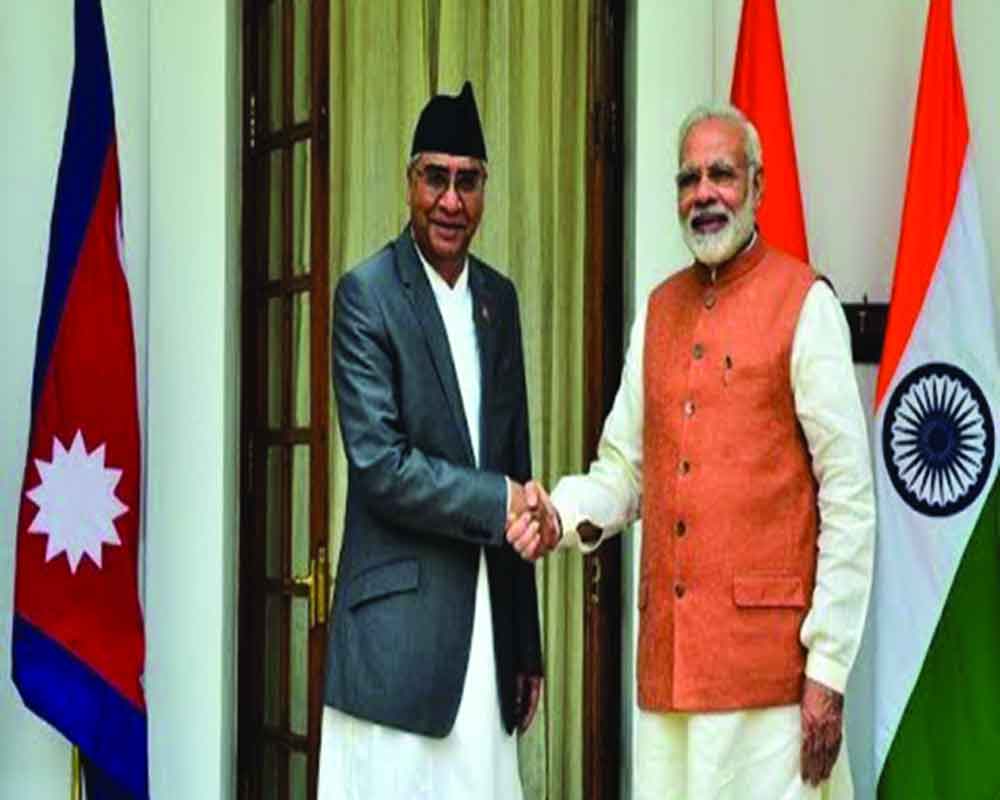 After hitting a rough patch during Oli’s tenure, there’s plausible hope that Indo-Nepal relations will grow stronger for mutual development

Amid the ongoing contest between China and the United States on asserting their position in Nepal over Millennium Challenge Corporation (MCC) and Belt and Road Initiative (BRI), Nepalese Prime Minister Sher Bahadur Deuba is arriving in India on a three-day visit today. It will be his first visit to India since taking over as the Prime Minister in July 2021. Meanwhile, Deuba and Narendra Modi had held talks in Glasgow on the sidelines of the Climate Summit in October 2021. The meeting evoked interest as it indicated a reach-out moment between the countries.

The visit comes in the backdrop of strained India-Nepal relations in the last three years. Since July 2021, Deuba has made attempts to improve bilateral ties; in fact, a Nepali Congress delegation led by former Foreign Minister Prakash Sharan Mahat visited India in October to prepare the ground for this visit and met BJP president JP Nadda and Foreign Minister S Jaishankar. In August, Vijay Chauthiwala, the head of the BJP’s foreign affairs cell, visited Nepal and held talks with Deuba, UML Chairman KP Oli and Maoist Party Chairman Prachanda, among others.

Backdrop: With the formation of a Communist Government in Nepal in 2018, the bilateral ties touched the nadir in recent history. Kalapani became the most contentious issue which ex-Prime Minister Oli chose to politicise instead of resolving it diplomatically. Oli’s anti-India centric ultra-nationalist outlook proved to be a political stunt to consolidate his position vis-à-vis Prachanda, who had been demanding Oli’s resignation. Meanwhile, despite India’s multiple requests to resolve the border row, the Kalapani issue was used as a tool by almost all political parties to make electoral gains.

Connectivity and Energy on Cards: Among many likely agreements and MoUs, connectivity and energy are high on the cards. For a landlocked Nepal, access to the third world through land and sea routes is only through India. Nepal conducts its third-country trade through India. Meanwhile, on a few occasions, diplomatic tensions interrupted the movement of people and goods at the India-Nepal border. During the Madhesi Andolan in 2015, the border was partially closed after protesters blocked the transit points with India. Thousands of trucks from India, laden with emergency supplies of petroleum, medicines and pulses, were stuck for months.

To ease the supply of such products, India has executed several connectivity projects with Nepal. In 2020, India successfully delivered the first cross-border petroleum pipeline with Nepal, which is one of the firsts in South Asia and stands as a role model for regional cooperation. In October 2021, the two countries signed an MoU on railway connectivity to connect Kathmandu with Raxaul. It will serve as a lifeline for Nepal’s cross-border public and container transportation. Despite Oli’s best efforts to tarnish India’s image, the latter has continued to extend a helping hand to the Himalayan nation.

On the energy front, Nepal has rich hydropower potential. However, this sector has largely been ignored due to an unstable political and economic environment. For over three decades, India has been pushing to tap its hydropower potential on a mutual basis. In 1996, the countries signed an ambitious and economically viable Pancheshwar Multipurpose Project aimed at producing more than 5,000 MW. However, the project is stagnating in political indulgences. During Modi’s first visit to Nepal in 2014, the project was expected to receive a big push but India’s efforts fell prey to a lack of interest from Nepal. Even after 26 years, no joint Detailed Project Report (DPR) has been prepared. For Nepal, Bhutan must serve as a fine example of benefitting from India’s technical expertise in power production and encashing the end product by exporting it to India. With renewed scope for cooperation in the hydropower sector, the joint DPR may get tabled during the current visit.

Geo-Strategic Relevance: The previous Communist Government in Nepal brazenly danced to China’s tunes. With Oli as the Prime Minister, China received maximum encouragement and began to openly intervene in Nepal’s domestic and foreign affairs. The Chinese Communist Party delegations to Nepal in the last three years have demonstrated their outreach. However, with Deuba at the helm, there is a clear sign of rapprochement towards India. Also, with the entry of the US through MCC in Nepal, China is realising the loss of ground. The recent visit to Nepal by Chinese Foreign Minister Wang Yi in the backdrop of the parliamentary ratification of the MCC development grant worth $500 million by the US is clearly seen as competition to BRI and its ill-intended expansionist agenda in Nepal.

Therefore, India as an all-weather development partner of Nepal and the US as an emerging one present a strong challenge to Chinese manoeuvrings.

Conclusion: PM Deuba’s visit to India is a welcome step. However, despite the ongoing bilateral cooperation, developments on resolving the Kalapani issue will be looked at closely. Also, Deuba has a short stint at hand, considering the parliamentary elections by the end of this year. Yet, any progress in bilateral ties will be a clincher in future course.

(The author is a Research Associate with the Vivekananda International Foundation. The views expressed are personal.)