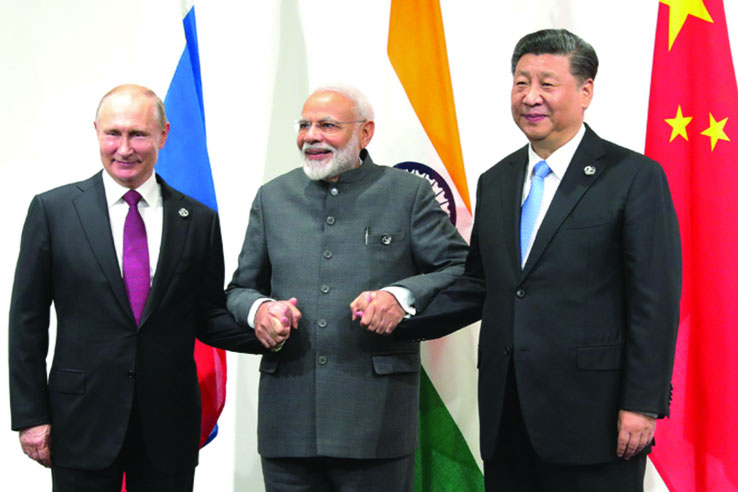 New Delhi hopes that Moscow will help it resolve ongoing problems with Beijing; it doesn’t realise that Russia is just a vassal State of the Chinese

We are witnessing Russian attempts to brutally subjugate Ukraine, even going so far as to threaten the world with nuclear Armageddon. Clearly, leaders from the US, its European allies, the Russian Federation and Ukraine have badly miscalculated and put the world in grave danger. Probably, a rapid regime change and the rather fanciful wish to assimilate Ukraine into Mother Russia was what Putin hoped to accomplish. Things have obviously not gone according to plan as his Generals completely miscalculated Ukrainian resistance. While he may still succeed, any new regime will likely last as long as it has Russian military support to back it up. This seems uncertain, given that the ability of the Russian military to control a restive population over time seems extremely doubtful. Putin may, therefore, have to be satisfied with the capture of sufficient territory in the Donbas region that would provide a land corridor connecting Russia to Crimea.

Even this will not be acceptable to the Ukrainians and Putin is likely to have a serious insurgency on his hands, which his conscript Army will find increasingly difficult to control. As economic costs and instability in the region mount, one can deduce that, in all likelihood, things will end badly for Putin himself, that is if he manages to last out till the next presidential elections due in 2024.

There is no gainsaying that geopolitical machinations on the part of the US and the West to push Nato eastwards have given Putin the excuse to act like he has, supposedly in the interest of national security. However, his actions appear to have been pre-mediated as in the days leading up to his unprovoked offensive, diplomacy was paying dividends and Russia was gaining substantial traction within the international community. Thus, despite winning the diplomatic war, Putin decided to forcibly occupy Ukraine and launched a no-holds-barred assault that has led to a humanitarian crisis. This has truly angered the international community, especially since we are only now finally coming to grips with the COVID pandemic and the havoc it has wreaked globally.

Indeed, in a globalised world, whatever be the reason, national leaders can ill afford to resort to the use of force to satisfy their egos and personal ambitions, given the ramifications their actions have worldwide. As events unfold in this pointless and bloody war, it is not just the people of Ukraine and Russia who are paying a heavy price. It is damaging and destroying livelihoods, hopes and aspirations of families as far away as Chalageri village in Karnataka’s Haveri district, home to 21-year-old student Naveen, who was killed in Russian shelling in Kharkiv. The ambivalence displayed by the Indian Government in condemning Russian aggression and supporting the Ukrainian position is indeed difficult to understand. The immediate result of its actions has been that our 20,000-odd students were placed in harm’s way and have had to face the brunt of Ukrainian anger.

Despite a GDP twice that of Russia, we continue to fawn and genuflect in the vain hope that they will act as honest brokers for us with the Chinese and help resolve our ongoing problems with them. We are unwilling to face the reality that Russia is nothing more than a vassal State of the Chinese. This should have been obvious from the fact that Putin reportedly delayed his offensive till the end of the Winter Olympics at the behest of President Xi. In stark contrast, he did not consider it necessary to give Narendra Modi a hint of what was to come, thereby enabling us to get our citizens out in good time. Or, for that matter, as the situation deteriorated, given our “supposed clout”, why did we not send in our Special Operations Forces to establish a humanitarian corridor and with Russian assistance escort our citizens out of harm’s way before cities were besieged? Obviously, our friendship is overstated and to believe Russia has our interests at heart and will support us in any future conflict with China is to live in a fool’s paradise.

A dysfunctional DRDO, inefficient ordnance factories and disjointed procurement policies have made us dependent on Russian weapons systems. However, their performance in the ongoing conflict leaves much to be desired and it is time we started looking elsewhere, especially given the sanctions now in place.

Finally, one cannot help but aver that while we aspire to sit at the high table, we lack the spine to stand up and be counted when push comes to shove. This is why we may yet confront what former Foreign Secretary Shyam Sharan refers to as the “nightmare scenario”; a situation where America sells us down the river and accepts Chinese primacy in Asia, given our unwillingness to support it unequivocally. Of course, there is a choice, we could grovel before the Chinese and hope they leave us alone. The truth is, at the end of the day, only our interests matter.