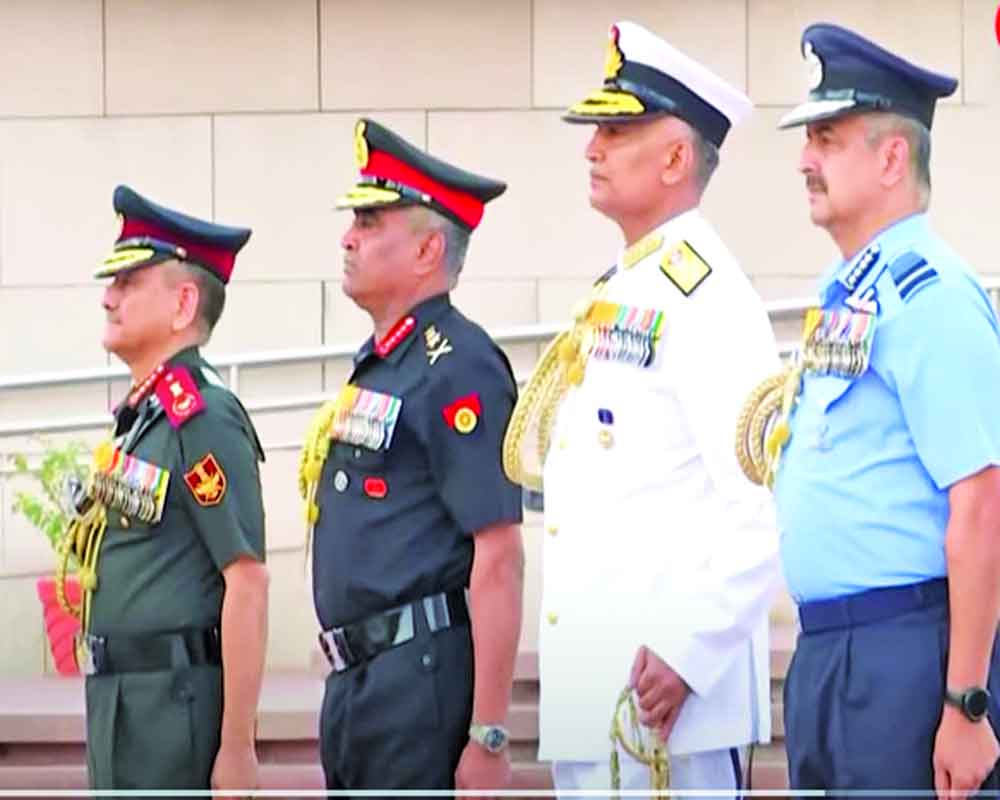 Almost 3 months after his appointment as CDS, Gen Anil Chauhan has maintained silence. He travelled to Def-Expo in Gujrat and along with three service Chiefs to NDA Khadakvasla, the cradle of jointness - symbolically a deft move. Initial briefings and scrutiny of feedback from Services on theatrisation are over. Integrated capability development requires a Joint Procurement Agency which was produced by Defence Planning Staff in 1988. The absence of institutional memory causes time and cost overruns.

CDS has become synonymous with integration and theatrisation, the task given originally to late Gen Rawat. Jointness was to be achieved in 3 years but no timeline was set for Integrated Theatre Commands. Not surprisingly, days after Gen Chauhan’s appointment as CDS, Air Force Chief, Air Chief Marshal VR Chaudhari, in the run-up to IAF Day on 8 October, admitted that inter-service differences had not been reconciled and a discussion was warranted to find a solution to take theatrisation forward. He reiterated the traditional objections of IAF: the paucity of resources, just 30 fighter squadrons today and best case of 35 to 36 squadrons by 2035; 24X7 AD cover required concentration of resources and separating the two (AD Command and Theatre Command) will affect joint strategy.

Gen Rawat, not averse to shooting from the hip, had stirred a hornet’s nest by suggesting IAF was an extension of Artillery and essentially a combat support arm. ACM Chaudhari’s recent comments included a ‘future ready IAF to include space and cyber-space, abridged decision-making chain of command and need for a joint strategy’ while each service had its own doctrine. As a precautionary, he added:” IAF is not opposed to integrated theatre commands (theatrisation)”. He also advocated the need for an equivalent national security strategy. NSS is a vital document on integrating the whole of government effort that every President in the US is mandated to produce once in his term. Biden issued an interim NSS in March 2022 and on 12 October, a final one. The Biden strategy talks of ‘strategic competition with China, the US’s ‘most pressing challenge’. “We will effectively compete with PRC which is the only competitor with both the intent and increase the capability to reshape the international order while constraining a dangerous Russia’.

On India, it says ‘as it is, the world’s largest democracy and a Major Defence Partner, the US, and India will work together bilaterally and multilaterally to support our shared vision of a free and open Indo-Pacific”. For a long time India used to define its military challenge as: while Pakistan is the immediate threat, China remains the long-term challenge. That was dramatically reversed by China’s incursions in Ladakh. The 1986 Goldwater-Nichols DoD Reorganisation Act in the US brought about sweeping changes, especially on integration and jointness; almost simultaneously in the UK, the Heseltine reforms introduced the CDS legislation. India is  allergic to the idea of a written document outlining national security objectives, their orientation, and their pursuit. No White Paper has seen the light of day even though India had a CDS for nearly three years. India is defiantly proud of its strategic autonomy and that it is among the world’s leading economies with the third largest military.

India feels that not articulating NSS is a strategy, though there is one. The Raksha Mantri’s Operational directive with 8 contingencies to three Service Chiefs is considered good enough. A Joint Services Doctrine 2017 on release was found with many loopholes. The Breaking News is that NSS is being scripted by NSA.

The current debate on theatrisation has turned into prioritising structures, strategies, and capability building. Movement on capabilities has been tardy due to insufficient funding and somewhat retarded by Atmanirbharta in absence of quality R&D and a developed military-industrial complex. The IAF is stuck at 30 squadrons for two decades and an RFP for 114 MRCA stagnates for 5 years. Legislation mandating conceptual and structural transformation through the CDS system instead of amendments to Service Acts must become the path to integration. NSA Ajit Doval who heads DPC is working on NSS from an integrated review of defence, foreign, and development -in other words, the Strategic and Technology Environment meshed with fiscal allocation.

Gen Chauhan is determined to press on with Eastern Land Command (China); Western Land Command (Pakistan); Air Defence Command; and Maritime Theatre Command. Northern Command dealing with LAC and LOC will be merged later with ELC and WLC. Air Space Command and Cyberspace Command commissioned in 2017 are likely to be operational shortly though there are teething problems with ASC. One other entity will also be operationalized shortly- the Special Operations Division consisting of Battalion Special Forces, Garud, and Marcos squadrons. This will later upgrade to Special Operations Command. Gen Chauhan must invite ACM Chaudhari for talks to smoothen wrinkles in establishing ITCs with as little difference as possible. Political oversight is essential to prevent irreconcilable differences. A periodic review will be useful.