Lost rights and setting it right

Lost rights and setting it right 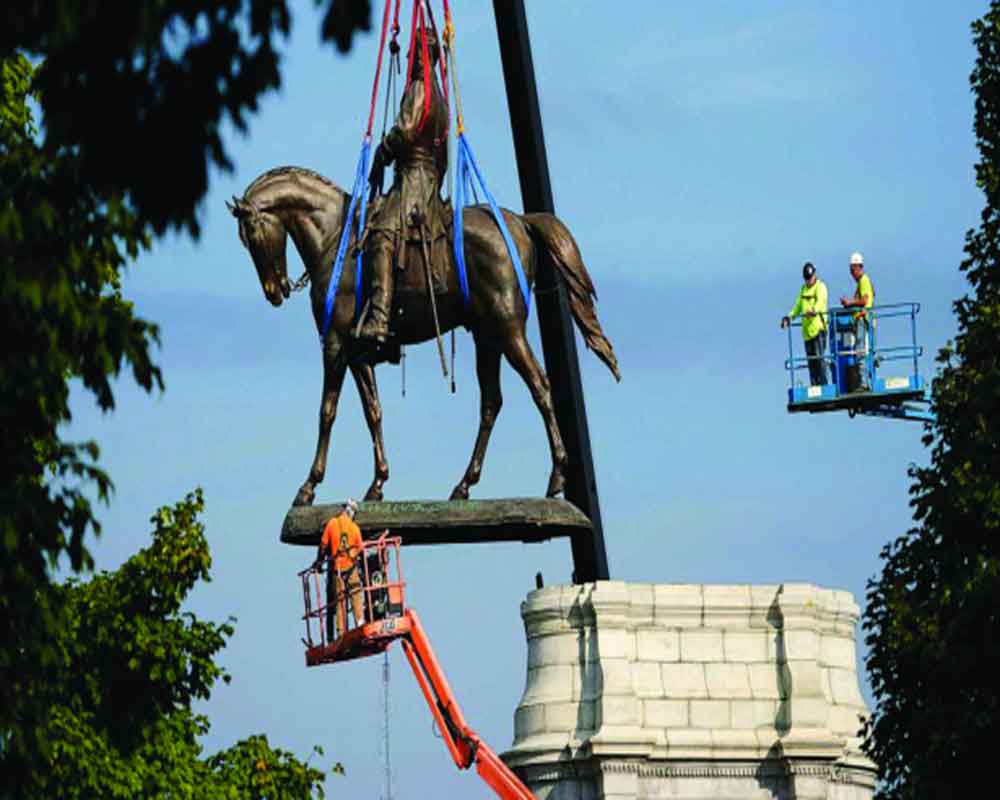 In the US, there’s growing realisation about the need to publicise issues related to various types of gross injustices committed in the past

Driving by the township of Camden in north-eastern America, I saw the banner headline, ‘Enslaved Africans Once Sold Here’. Drawn by this nugget of history, I came closer and found the following description: “African slavery in New Jersey began with early European settlement. By 1766, circa 800 captive people had been sold here at the Federal Street Ferry and two other nearby ferry landings. In Africa, approximately 24 million captured men, women and children marched to coastal prisons. Only half survived the journey. These 12 million survivors then endured deplorable conditions on the Middle Passage ocean crossings, where an additional 2 million died from disease, malnutrition, dehydration, drowning, suicide and abuse.”

It is an impressive way of informing people about some of the most tragic episodes in American history — a message from the later generations about the brutalities and irreparable damage inflicted on their ancestors. This gesture, it is felt, might act as a balm for the descendants of the victims!

In recent times, there have been several well-publicised events around such issues in the US related to various types of gross injustices committed in the past. From the signages standing in front of well-known historical monuments, museums, seaports and vast stretches of farm land to political-cultural narratives, one can notice this. There is no escape from such much-needed reminders. Well-publicised photographs depicting the removal of the equestrian statue of Confederate General Robert E Lee from its high pedestal in Richmond Va in September 2021 was a major milestone in this process of looking back at such acts of gross injustice and atoning, even if symbolically a perversity. The ongoing practice as pursued by some American institutions — local Governments to universities, to name the native people deprived of their landed properties by force — called “land acknowledgements”, is a sign of sagacity and maturity that call for appreciation and emulation by all the right-thinking people cutting across national/racial boundaries. Every passing day, more skeletons tumble out of the cupboard. Hence, people were not surprised when the name of Woodrow Wilson, the 28th US President (1913-1921), famous for his 14+4 points, and his stellar role in facilitating the end of World War I was dropped from Princeton University’s International Affairs Department for his racist past. Even the iconic George Washington was found to be a slaveholder owning 317 black slaves. It is indeed a pretty long list.

Be that as it may, one is likely to ask as to how it is relevant for other countries? The underlying principle is certainly applicable to various countries with a similar past. Here, we would like to ask how such a process set into motion in the US is applicable to India, which was brutalised over a millennium by a long line of ruthless foreign invaders, rulers and their local collaborators?

Beginning with the Arab invasion of Sind in the 7th century, Indian society was pulverised by these religious zealots seeking to impose by savagery a different world order — establishing a dar-ul-Islam on a polytheistic India they tauntingly called dar-ul-harb. It is most regrettable that Jawaharlal Nehru described Babar, an alien invader, as “Renaissance Prince”, a man of culture, in his Discovery of India! In a vivid description, famous historian Arnold Toynbee said, “The Islamic conquest of India is probably the bloodiest story in history.”

In recent times, the movement for the liberation of Ramjanmabhoomi temple in Ayodhya was one such example of claiming back a holy piece of land/temple from illegal occupiers, who were also guilty of desecrating a sacred spot. That thousands of such desecrated temples over which mosques had been erected still remain under illegal occupation is not a classified secret. Several scholarly studies have been done on this aspect. Much, if not most, of what goes on in the name of Wakf property happens to be located on such landed properties now under unauthorised occupation. It is perhaps time to ponder over it, and set right such blatant cases of gross historical injustice!

From desecrated temples, marketplaces for selling Hindu slaves and their export, places of conversion to Islam, Jihadi battles won by “holy” Ghazis, museums, political-cultural narratives and finally the all-important history books are now very much expected to see some drastic changes regarding how society must look back at the past. Victims of history from Kandahar to Khulna, Kashi to Kohat and Kashmir Valley, Mathura to Multan to Malabar want more than an acknowledgement of the sufferings: They seek immediate restoration of their habitat and holy places. The victims have waited far too long.

For any society claiming to be civilised, genuinely secular and democratic that wants to avoid the pitfalls of the past, such a moment of reckoning has to come. This generation is expected to witness many healthy debates and acrimonious battles over many such historical experiences people have gone through. It is high time to heal their wounds.

(The author, a historian, is currently a member of the Indian Council of Historical Research. His most recent publication is The Citizenship Amendment Act, 2019: Some Reflections. The views expressed are personal).