Matters of hijab and choice may go too far

Matters of hijab and choice may go too far 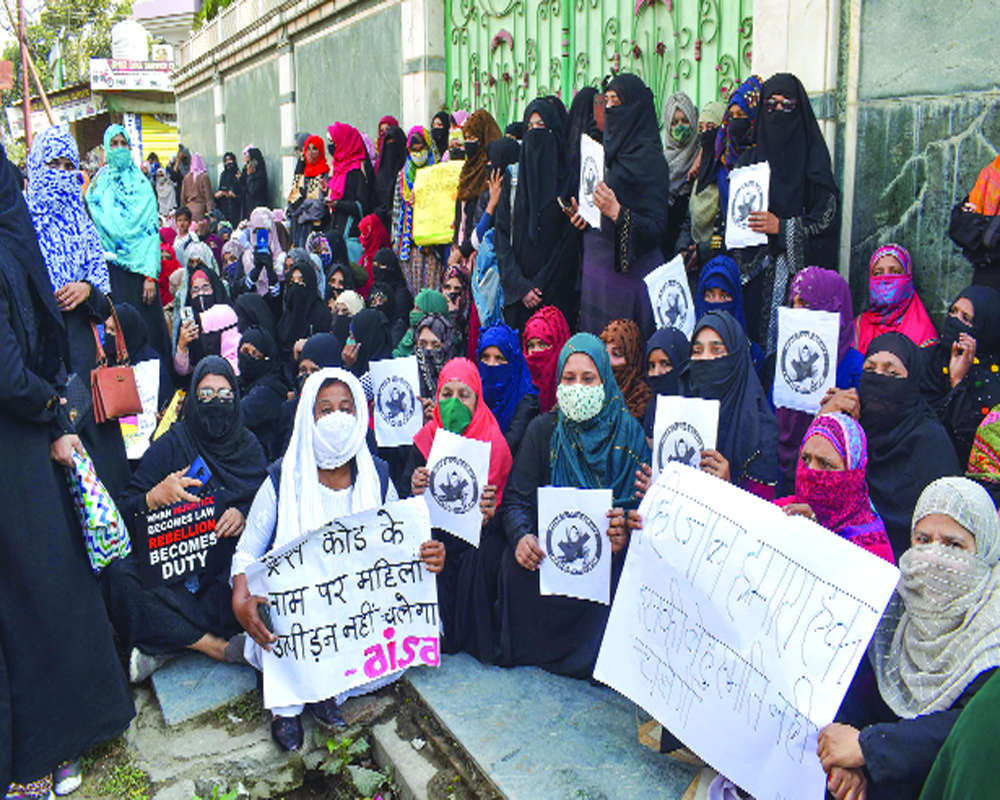 The young college-going girls wearing black externals and screaming in protest at the Mahatma Gandhi Memorial College in Udupi district in Karnataka on February 8 had donned burqas and not hijabs. Comparatively very few women wear burqas, except in West Asia. If it were an essential religious practice for those following Islam, most Muslim women in the world would be termed non-believers, as laid down by Prophet Mohammad. Advocate Kamat, pleading before Justice Krishna S Dixit, was evidently confused. A hijab is much briefer than a burqa and, like the latter, is defined as a medium of seclusion. Burqa is called a veil of seclusion of women when they are walking ‘abroad’, which probably meant taking a walk in an unfamiliar place, according to the Dictionary of Islam (Thomas Patrick Hughes; published by Rupa & Co, 1999).

Be that as it may, the current hijab controversy that has erupted from Karnataka has all the makings of a civil confrontation. Students in huge numbers have taken to the streets with chants of “Jai Shri Ram”. Police personnel and authorities are doing their best to pacify them, but the protesting students have raised a valid point. Educational institutions in a supposedly secular country are not places where open display of religiosity should be allowed. If the religious symbols of one bunch of students are to be tolerated in the name of freedom of choice and belief, there can be no grounds for denying the same right to those who demand wearing saffron scarves or tilaks on their foreheads. Advocate Kamat has been quick to jump to the defence of the hijab-sporting crowd by saying that wearing the garment is an “essential religious practice for those following Islam”, but this again seeks to skirt the real issue. First, according to the advocate, do those Muslim women who do not wear a hijab automatically fall into the category of non-followers? However, more important is another issue.

What legal or constitutional right does a State that calls itself secular, have to lay down what the ‘essential practices’ of any particular religion are or ought to be? This is what those legal luminaries like Kamat, who are pleading for the right to wear hijab, are seeking in demanding State enforcement of religious obscurantism of some particular community.

Some other States, Madhya Pradesh in particular, have been quick to join the issue by stating that students are required to follow the dress code laid down in educational institutions, irrespective of the traditions they might be following at their respective private spaces. Madhya Pradesh Education Minister Inder Singh Parmar has, in reaction to the Karnataka hijab row, stated that beginning next session, the State Government will issue rules and regulations related to the uniform dress code.

Religious, constitutional and legal arguments apart, the country’s concerned citizens need to pay much closer attention to the current hijab controversy. The latest row has begun from Karnataka, which is a southern Indian State, where attempts to stoke separatist sentiments have been under way even before India attained Independence from British rule in 1947. Karnataka is also a State witnessing a reassertion of the Hindu identity in recent decades. The ultra-quick reactions by the sections of those who lost power in 2014 are a clear pointer to their involvement to stir up trouble in order to portray the country in a sordid light at the international fora. Shades of a larger conspiracy cannot be missed here.

If hijab, naqab and burqa are a matter of ‘choice’, as many of their apologists are claiming on television panels and in newspaper columns, the urgency of some girls to wear it now and also make it a matter of political controversy must be questioned. Also, it is likely that the tale will not end here. There will be, in most probability, demands raised from certain quarters for permission to perform namaz in school and college premises, as these too would arguably comprise “essential religious practices”. A backlash in the form of public pujas and aartis will not take long in manifesting. Next would be demands for “a separate space for performing namaz”. Would things stop there? Not likely; demands for separate halal counters in college canteens, backed by politicians, would soon be reverberating. This is not in the domain of imagination as even the US and some other western countries are combating such demands. Further along, demands for time off from class periods for mandatory praying would follow. Given the changed, and changing, political mood in the country, it is not inconceivable that a response from the majority community would soon come forth.

The current row also perhaps demonstrates that it is the apt moment for the country to refocus attention on the crying need for a uniform civil code, without which all talk of secularism will at best remain a shibboleth. India, indeed, remains a unique case of a country that swears by secularism it refuses to define.