Need babus for knowledge based India

Need babus for knowledge based India 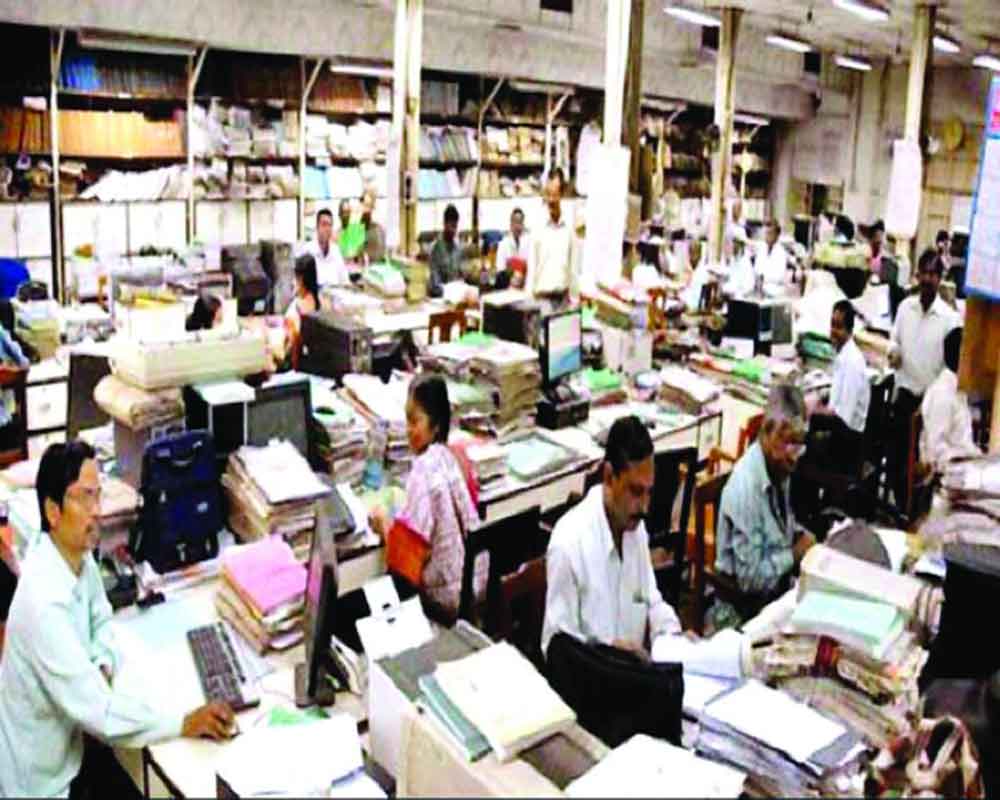 At a time when India aspires to be a $5-trillion economy, existing bureaucracy needs a radical transformation

India is aspiring to be a $5-trillion economy in a short span of time. By 2030, the target of the government is to hit the $10-trillion economy size, and take off from thereon for qualitative and quantum jump in the socio-economic space of the country. The government may have a robust action plan to execute the economic aspirations.

But the plans are executed by the men and women in various domains who are the faces of the government on the ground. If the administrators prove to be enablers, India will reach the target economic size within the time frame. But if they prove not to be adequately equipped with the skillsets, India may falter, and that calls for urgent steps for the much needed administrative reforms in the country.

The Narendra Modi-led National Democratic Alliance government at the Centre is taking various measures to equip the administrative officials with the skills that are required to build ‘New India’. The exercise at the various levels seeks to address the issues concerning the capacity-building challenges. The National Programme for Civil Services Capacity Building is one such exercise which is addressing the skill set challenges at the individual and institution levels. There are other digital modes of interventions to reorient the civil servants to the required knowledge sets. The State governments are also embarking on the path of administrative reforms.

government and the citizens for various services. But the pace with which technology is evolving may herald a stage where the citizens can self-source such services with the digital eco-system as has been the case mostly in getting passports made, which in the previous years and decades used to be arduous tasks.

If the current thrust to reorient the bureaucracy for timely and speedy delivery of the services to the citizens are met with the interplay of technology, India may have a huge army of civil servants who would be least productive and also liability to the national exchequer and also the hard-earned money of the tax-payers.

If we look back, it’s hard to find thought leaders from among the bureaucracy, who by their innovations would have changed the face of the socio-

economic domains of the country. This must be on account of the Indian bureaucracy not yet shedding its British era outlook. The civil servants just need to crack one examination, and afterwards they can lord over their subjects.

‘New India’ cannot have any space for such bureaucratic resources. Administrative reforms in the country have been attempted for several decades, and the first such commission was headed by none other than Morarji Desai in 1966, who later became Prime Minister of the country. Later, Veerappa Moily also headed one such commission in 2006.

But the outcome has just been incremental, with focus on downsizing of the bureaucracy to save the expenses. The recent report of the Reserve Bank of India on the indebtedness of the States has shown an alarming scenario. Many of the States are reeling under the burden of salary and pension to its employees. This is despite the fact that the States have been downsizing their bureaucracies since the 1990s. That means that India is still stuck in the cobweb of the old age bureaucracy, which is essentially seen as a measure to offer jobs at the expense of the state exchequer.

The Modi government has done a few experiments to reform the bureaucracy, which included lateral entry, weeding out nonperformers by giving them compulsory retirements, and so on. But it appears that radical changes need to be adopted if India indeed wants to reach the goal of a $ 10 trillion economy by 2030 and triple the size by 2050.

India will need people at key positions, at policy formulation stage, and in fields to execute them, with speed that would be unseen, and scale that would be the best in the world. The interventions would essentially be at the entry levels, and the time may have come to write an obituary for generalists.

That an IAS officer can be at one time a revenue secretary, and another time he could be handling the affairs of road and transport is just an idea of the time that has lost its relevance. India must say a goodbye to the culture that generalists can do all roles, as if they are blessed with some divine skills to acquire the know-how of the new tasks with the change of the departments.

The basis of the biggest reforms in the Modi government is the use of data with the digital interplay, which essentially banked on the skills of data mining and data analysis. That saved India several thousands of crores of rupees. This makes it clear that we need to create a manpower powerhouse of specialists, who can man areas of their expertise. A specialist will be better equipped to innovate, and innovations will accelerate India in scaling up its socio-economic depth.

We are no more in the 20th century that the people will be patient with incremental progress of the bureaucracy. Technology is making things irrelevant which were in vogue previously. Indeed, such specialists cannot appear on the horizon on their own. We get the skill sets only from our institutions, and the time has just come to overhaul our education system, and make them tuned to the needs of specialized skills in diverse spheres — economy, commerce, technology, social and political sciences, bio-technology, cutting edge management and so on.

Besides, it's also worth debating why bureaucrats should have career spans of 30 years and more. Why cannot they come in for about 10-15 years, and take up assignments in other spheres, including the private sector. The Agniveer scheme in this aspect is a harbinger of a change that may have spillover effects in the other domains. Let the government avail of the best of the time of the professionals working in its ranks, and when the fire in their belly gets extinguished they should be respectfully retired, which can be institutionalized with a career span of about 10-15 years.

Such an ecosystem will also make available a trained talent base for the private companies, who in the end have to expand their capacities to take India to the $ 30 trillion economy by 2050. The best of the talent shouldn't be just with the government, and an easy flow with the private sector can help bring in better convergence of the ideas for ‘New India’.

Indeed, India is essentially a welfare state, and the time has come for the private sector to share the burden of the government to care for the poor of the country. This again can be achieved if there is a flow of the talent pool from the government to the private sector. Corporate social responsibility and its various other modes in diverse areas will also require new age managers, who cannot bank on the graduates of the management institutions, as their hands-on training would only be possible with stints in the government services. That calls for urgent administrative reforms, and time is ticking.