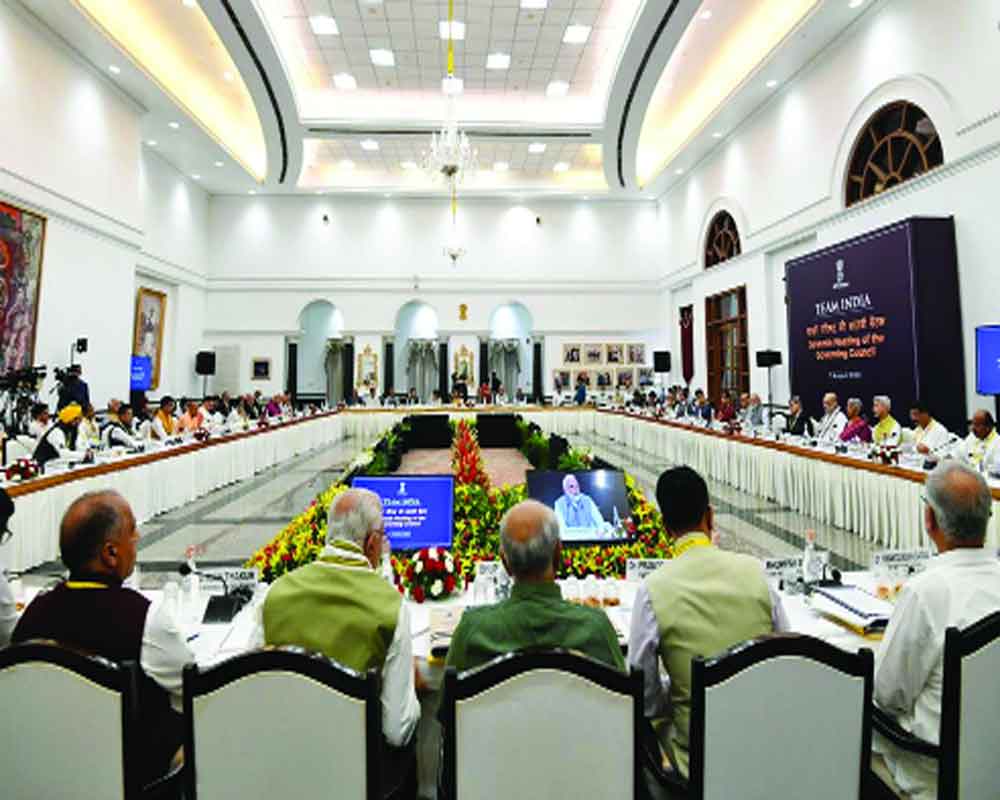 India is commemorating 75 years of Independence as ‘Azadi ka Amrut Mahotsav’. Prime Minister Narendra Modi chaired the seventh Governing Council meeting of the Niti Aayog on August 7, 2022 at Rashtrapathi Bhawan Cultural Centre in the national capital. This meeting was the first in-person meeting of the Council since July 2019. Six earlier meetings of the Council were held on February 8, 2015; July 15, 2015; April 23, 2017; June 17, 2018; June 15, 2019; 20 February 2021. What were the outcomes in these meetings to strengthen cooperative federalism in the country remains a million-dollar question.

National Education Policy, crop diversification, urban governance were the agenda items for the recently concluded meeting. PM in his inaugural address said that India’s shared vision and cooperative federalism emerged as a model for the world during the Covid crisis for which he gave the credit to the states. Suman K Bery, Vice Chairman, Niti Ayog, in his tweet reiterated support in assisting states and UTs to achieve their development goals through cooperation and coordination. He stressed that the Centre and the states together can accomplish the shared vision for the country's ‘Amrit Kaal’. Time and again the same words are repeated.

Telangana Chief Minister K Chandrashekhar Rao and Bihar Chief Minister Nitish Kumar preferred to stay away from the meeting. A day before the meeting, Telangana CM KCR addressed a strongly-worded open letter to PM Modi, specifying reasons for boycotting the meeting. Later, at a crowded press meet, he explained in detail the origin, concept and evolution of NITI Aayog in place of Planning Commission, and how in the process, the institution became absolutely inefficient and ineffective in upholding and strengthening cooperative federalism in the country as enunciated in its objectives.

As a mark of strong protest against the present trend of the Central Government to discriminate against states and not treating them as equal partners in the collective efforts to make India a strong and developed country, KCR said that he was boycotting the meeting. He cited several examples of gross injustice done to Telangana, as the Centre turned a Nelson’s eye even to the recommendations of Niti Ayog too.

The federal structure of India is being systematically eroded by some deliberate actions by the Central Government and, needless to say, these developments are very much discouraging to trailblasing states like Telangana, added KCR.

Niti Aayog, formed on January 1, 2015, has in its top body, the Governing Council consisting of all the Chief Ministers, the Lieutenant Governors of Union Territories and several Union ministers. The members were described as ‘Team India’. The Governing Council is supposed to be tasked with evolving a shared vision of national priorities and strategies, with the active involvement of States, in shaping the development narrative with the spirit of cooperative federalism. Unfortunately, in all the meetings held so far, the Chief Ministers were seldom allowed to speak for a reasonably considerable amount of time to explain the problems faced by them.

Niti Ayog’s predecessor Planning Commission was set up in March 1950 in pursuance of declared objectives of the Government to promote a rapid rise in the standard of living of the people by efficient exploitation of the resources of the country, increasing production and offering opportunities to all for employment. Also, it was tasked to formulate plans for the most effective and balanced utilization of resources and determining priorities. Jawaharlal Nehru as PM was the first Chairman of the Planning Commission. Eminent Persons like Gulzari Lal Nanda, Ashok Mehta, Gadgil, C Subramaniam, PN Haksar, PV Narasimha Rao, Manmohan Singh, Madhu Dandavate, Pranab Mukherjee, Montek Singh Ahluwalia, etc., headed the Planning Commission as Deputy Chairman.

In his first Independence Day speech in 2014, PM Narendra Modi announced his intention to dissolve the Planning Commission, which was in existence for nearly 65 years having done a marvelous job in consultation with Chief Ministers. It has since been replaced by Niti Aayog. Initially everyone in the country thought that Niti Ayog would be a better replacement to the Planning Commission, but in effect it proved otherwise.

In the very first meeting, the Prime Minister laid down the key mandates of Niti Aayog such as fostering cooperative federalism and addressing national issues through active participation of the States. But as the years passed, the concept and practice of cooperative federalism became a rude joke. Keeping this in view, KCR in his letter in the very first paragraph pointed out that “Niti Ayog was started as a new institution with the lofty objective of bringing the States on the same page with the Centre for ensuring the equitable development of our country in the true spirit of cooperative federalism”. The underlying principle was that cooperative federalism was the adhesive that would bind the States and Centre together as ‘Team India’ and help India emerge as a strong nation, wrote KCR, adding that the other idea behind the initiative of Niti Aayog was the realization that only strong States can make a strong nation”.

KCR went on detailing how the federal structure was systematically eroded by the present Government at the Center. According to KCR, in the beginning, Niti Ayog had constituted a group of Chief Ministers to give recommendations on developmental issues. A major recommendation of the group was that in respect of the Central sector schemes, States should be given flexibility to design or modify the schemes based on their needs and conditions to ensure maximum benefit to the people. Such an important recommendation has been kept aside and on the contrary, micro-managing the schemes was done by the Centre, giving a complete go by to State-specific needs which are best if left to individual States, pointed out KCR.

He affirmed that Niti Ayog, which was started with an objective of cooperative federalism recognizing that strong states make a strong nation, was observed more in breach of the objectives. The Centre’s actions show that the initiative has gone astray as States are not included as equal partners in the national development agenda.

At a time when Centre has been increasingly intruding into state subjects by running numerous Centrally sponsored schemes, shifting subjects from the State List to the Concurrent List and introducing new schemes in State subjects without any prior consultation with states, setting up of the Niti

However, the Niti Aayog which was mandated with fostering cooperative federalism through structured support initiatives and mechanisms with the states on a continuous basis, recognizing that strong states make a strong nation has not been successful in its objective. Though it seeks to design and assist the implementation of strategic, long-term policy frameworks and program initiatives of state governments, it never gives any proper directive to the Union Government to realize this. The Governing Council, which is supposed to embody the objective of cooperative federalism, seldom adheres to it except in formal speeches of the Prime Minister.

KCR displayed statesmanship by boycotting the seventh Governing Council Meeting of Niti Ayog. Let there be a nationwide discussion on the efficacy of Niti Ayog, which has been constituted to actualize the important goal of cooperative federalism but now shirks its responsibility.

(The author is Chief PRO of the Telangana Chief Minister.)