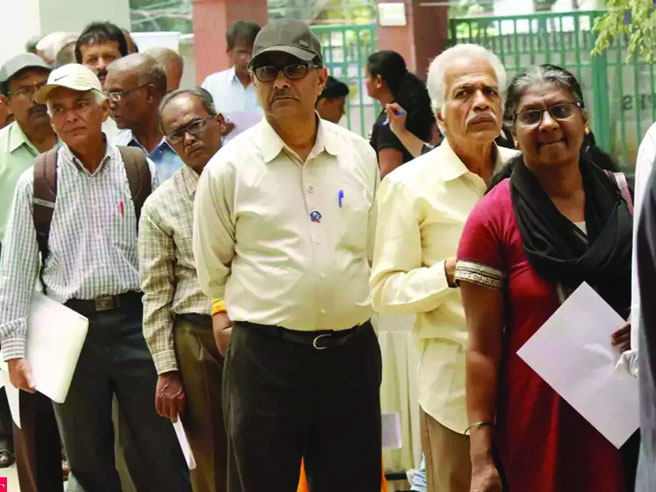 The old system provides social and economic security to employees; hence, the Rajasthan Govt decided to restore it in their larger interest

Congress Party and its Government in Rajasthan recognizes its duty to provide socio-economic security to the people. A Government employee serves for 30-35 years and spends his post retirement life on the basis of pension. It is therefore the duty of any elected Government to ensure that the employees live their life with a sense of security so that they can render their invaluable contribution to cause of good governance. With a view to strengthening the socio-economic base of the Government employees, the Central Civil Services (Pension) Act, 1972 was implemented which had provision for an inbuilt pension/ family Pension, Gratuity and commuted amount. Unfortunately, the old pension system was done away with by the Vajpayee Government in December, 2003 and replaced it with a New Pension System (NPS) w.e.f. 01.04.2004.

The NPS in its current form is riddled with a number of problems and the employees throughout the country have been demanding for the restoration of the Old Pension System (OPS) as the NPS fails to take care of their current as well as post retirement needs. National Human Rights Commission, CAG Report No. 13 of 2020 and the Second National Judicial Pay Commission have also raised questions about the efficacy of the NPS in providing guaranteed socio-economic security to the employees. Under the NPS, the hard-earned retirement fund of employees is subjected to the vagaries of share market which fluctuates at the drop of a hat. In the event of major international crises like the present Ukraine crisis, the share market nosedives thereby increasing the heartbeats of employees and perennially putting their social security at risk. An employee cannot work with his full potential and contribute to good governance if his socio-economic security is threatened. Since the pension fund is invested in market which is replete with risk and provides no guarantee of return even after 17 years of implementation of NPS, it engenders old age insecurity among the employees.

In order to protect the interests of Rajasthan Government employees and safeguard their life after retirement, the Congress Government in Rajasthan decided to restore the Old Pension System (OPS) for all the employees joining government services on or after 1 January, 2004.

In my budget speech in the State Assembly on 23 February, 2022, I have announced to implement the OPS from the next Financial Year. This decision has been hailed not only by the employees in Rajasthan but also by the employees of all the States. Earlier, Pension was the primary differentiating factor between the Government and the private jobs. The Pay scales in Government jobs cannot exceed the prescribed limit. Talented youths used to accord priority to government jobs because guaranteed pension under OPS provided security to their future. It has been observed the interest of talented youth in Government job dwindled with the implementation of NPS. The decision to implement OPS will attract large number of talented youth towards government jobs in future.

A number of factors convinced the Government of Rajasthan to restore the OPS. In the Old Pension System, an employee was guaranteed the right of pension as half of the last basic salary plus dearness relief at the time of retirement and in the case of in-service death, the employee and his family was given economic support in the form of Death- Cum-Retirement Gratuity (DCRG). No such guarantee is provided in the NPS.

Table 1.1 exhibits the major difference between the OPS and the NPS.

The fact that the armed forces have not been included in the NPS right from the beginning, makes it clear that the OPS adequately provides social security to them. The NPS was implemented for employees in Indian Coastguard under the defense ministry while the employees of this service work with the same alertness and face the same challenges as faced by the personnel of armed forces. Similar services are rendered by employees of BSF, CISF, CRPF, ITBP, SSB etc. yet they have been covered under NPS. The employees of the central and the State Governments also discharge their duties with the same spirit and commitment. Keeping two different systems of pension is discriminatory and is against the principle of natural justice.

In the performance audit of the NPS (Report No. 13 of 2020) the CAG has come out with revealing facts regarding the planning, implementation and monitoring of the NPS. The CAG report mentions that ‘Even after 15 years of introduction of NPS, rules on service conditions/retirement benefits in respect of employees covered by NPS were pending finalization (Para 3.2)’. Raising objection to the viability of the fund/scheme, the CAG in para 3.9 says: “There was no indication that actuarial evaluation of the fund/scheme was conducted once in two years and of adoption of any other mechanism to assess the viability of the fund/scheme.” Questioning the implementation of NPS, the CAG in para 4.1.3 of the same report stipulates that “there was no assurance that 100 percent of eligible employees were covered under NPS despite 15 years of implementation”. These are indeed serious objections which threaten the socio-economic security of the employees. States like Kerala, Andhra Pradesh, Assam, Himachal Pradesh and Punjab have setup state level committees to review the NPS in their respective states in view of the protests by the NPS employees. The West Bengal Government has not yet implemented the NPS.

While preparing the NPS, no attention was paid to the pension amount payable to the employee after the retirement. This has created a sense of insecurity among the employees throughout the country. If the NPS is so sacrosanct then why the Second National Judicial Pay Commission has, in its report in February 2020, suggested that NPS should not be implemented in the Judicial Services.

The employees appointed on/after 01.01.2004 and who have retired now, they have either not received any pension or if they have received any pension then it is not sufficient to make their both ends meet. Therefore, it can be said that NPS failed to achieve its objective. There was no provision of family pension and gratuity in NPS in the beginning. The Government of India had to implement the same later.

The Old Pension System provides social and economic security to the employees hence, the Government of Rajasthan decided to restore OPS in the larger interest of the employees. It is not fair to have two categories of pension schemes and differentiate among the employees.

(The writer is the Chief Minister of Rajasthan. The views expressed are personal.)