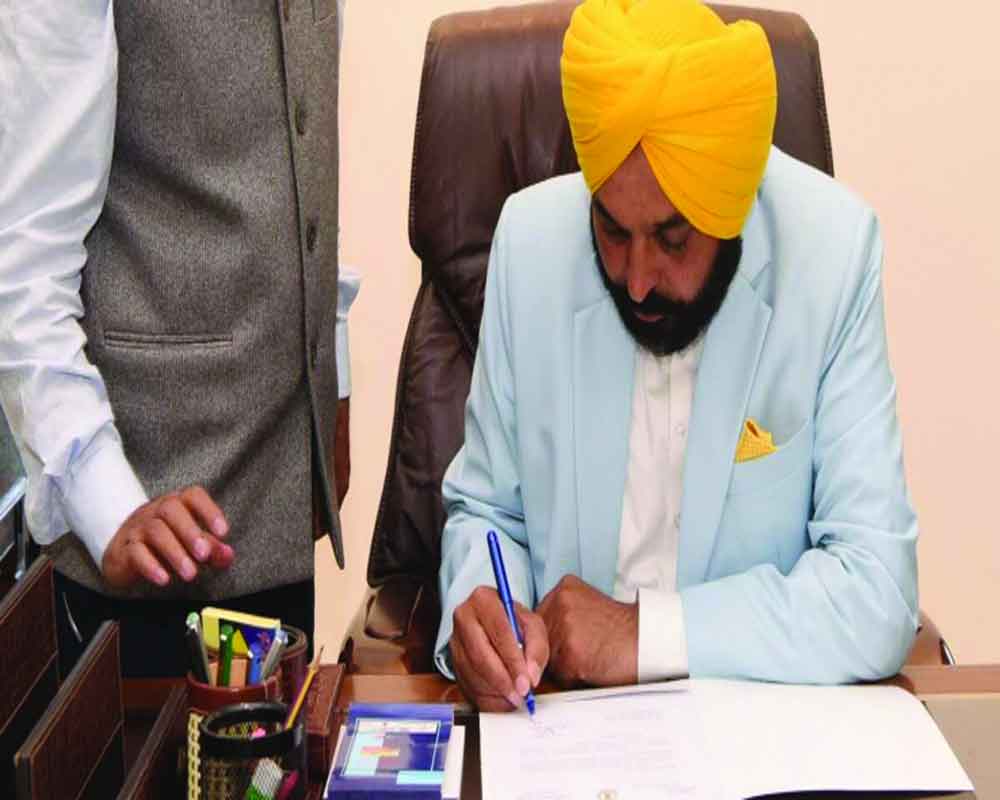 AAP is probably trying to replicate its Delhi model in Punjab, forgetting the huge differences between the States in terms of liabilities and finances

In these columns before the recent assembly elections, I wrote about how the endless freebies promised by all parties in the election-bound states will drag them along the slippery slope of financial insolvency (“Election freebies: But at whose cost?”, February 23, 2022). I wrote that the cost of these promises will have to be financed by borrowing, whose fiscal consequences would severely limit the State’s development and economic growth. Of all the states that went to the polls, none faces a more precarious financial situation than Punjab. Unfortunately, the only data available for this analysis are from the budget documents whose figures are suspect because of the poor record of fiscal marksmanship, not only of Punjab but of most Governments in India, the Union included. Authentic data can be sourced only from the Finance and Appropriation Accounts prepared by the Accountant General, but in case of Punjab, as I gathered from the Accountant General, these accounts for the years 2019-20 and 2020-21 have been submitted to the Government but could not yet be placed before the Assembly since the State did not have a full Assembly session since then. Ever since coming to power, AAP government has also been too busy in arranging for the doles it has promised before the elections to consider such trivial matters like focussing on the management state finances, especially the huge debt burden that is staring ominously at its face.

Punjab is one of the most heavily indebted states of India today with its debt exceeding 47 per cent of its Gross State Domestic product (GSDP) which itself had contracted by 1.85 percent in the last fiscal. This is way above the 38.7 percent target mandated by its Fiscal Responsibility and Budget Management Act (FRBMA) as amended. With outstanding liability of Rs 2.83 lakh crore, its annual interest burden alone is over Rs 20,000 crore. AAP’spromised 300 units of free electricity will cost the state exchequer an additional Rs 5,000 crore of subsidies which is already unsustainable. AAP is probably trying to replicate its Delhi model in Punjab, forgetting the huge differences between Delhi and Punjab in terms ofliabilities and financesPunjab is already saddled with too many subsidies -free power to farmers and to every BPL, SC and ST family upon 200 units of electricity, besides subsidies in fertiliser and price support for agricultural crops have already wrought havoc on the state, encouraging a cropping pattern that depletes its groundwater and contaminates its water bodies with unused fertiliser residues.

There also remains the issue of outstanding power bills of over Rs 12,600 crore to the Punjab State Power Corporation Limited (PSPCL) which the previous Government could not clear. For FY 2022, the State’s power subsidy bill was Rs 10,668 crore, of which 70 percent were for farmers who pay no power bill. For the current fiscal, PSPCL has reportedly sought subsidy of Rs 14,000 crore based on the existing tariffs. AAP’s promise will take the power subsidy to around Rs 20,000 crore, almost 20 percent of its revenue expenditure and 15 percent of its budget.

Failure to pay the subsidy will send its ripples throughout its fragile economy and beyond, successively affecting the discoms, gencosand finally the banks whose NPAs will rise, and the contagion effect will spill over beyond the state. With annual power theft estimated at Rs 1200 crore, the State’s power sector is crying for urgent reforms which a populist Government will be unlikely to carry out. Already the move to replace the old meters with more efficient new meters under the Union Government’s Revamped Distribution Sector Scheme that has the potential of reducing losses and pilferages is facing stiff resistance from consumers, especially farmers who fear it is a move to take them out of the subsidy net.

AAP has also promised income of Rs 1,000 transfer per month to every adult woman. It will cost around Rs 12,000 crore every year. It has also promised to set up 16,000 Mohalla clinics and provide free treatment to every Punjabi, besides ensuring Rs 5 lakh health insurance scheme for treatment in private hospitals. One would have to wait to see where the cash-stripped state will get the money for all these after paying off the servicing charges on its mountains of debt.

The State budget for 2022-23had estimated its total revenue receipts at Rs 95,258 crore, only 47 percent of which (Rs 45,192 crore) were to come from its own tax and non-tax revenues. Central grants account for 40 percent of its revenues and the rest 13 percent comes from its share of Central taxes. Pandemic has slowed down the revenue growth considerably - the tax revenue estimates of Rs 37,434 crore in FY23 was only 16 percent higher than its tax revenue of Rs 31,574 crore collected three years ago. The state’s non-tax revenue has also remained practically stagnant over this period, increasing marginally from Rs 7,582 crore to Rs 7,758 crore.

Almost 59 per cent of the state revenue comes from GST and VAT on petroleum and alcohol; state excise on alcohol provides another 19 percent andtaxes and duties on electricity provides 8 percent, yielding together 86 percent of its total own revenues; they have not shown much buoyancy. Of the non-tax revenues, 14 per cent come from state lotteries, 3 percent from interest receipts and the rest from the fees and user-charges from various services provided by the State.

The total revenue expenditure for FY 22 was estimated at Rs 103,880 crore, leaving an uncovered gap of Rs 8622crore (9.1 percent), which is known as the revenue deficit that has to be met by borrowing. 56 percent of the State’s revenue expenditure is non-developmental - of which the major components are interest payment (Rs 20,315 crore) and pension (Rs 11,767 crore); salaries and wages account for Rs 27,714 crore. Repayment of principal of Rs 18,513 crore will push the total debt service charges to Rs 38,828 crore, or 23 percent of GSDP. Even without interest, the primary account itself shows a deficit of Rs 3,924 crore, pointing to the unsustainability of its debt.

Including the capital outlay and net loans and advances given by the state, the total budgeted expenditure exceeded its non-debt receipts by Rs 24,239 crore, or 4 percent of its GSDP of 6.08 lakh crore, much above the 3 percent mandated by the State’s FRBMA. With fiscal deficit of 4 percent and own tax to GSDP ratio of only 6 percent, unrestrained State welfarism and freewheeling subsidies will undoubtedly push the state deeper and deeper into debt, taking to closerto the brink of a financial collapse that will cause misery to its people. Blaming the Centre as the AAP is wont is not going to help. The State must take lessons from the tragedy unravelling in Sri Lanka from mismanagement of public finances by successive Governments which has brought the country to the present mess. It must apologise to the voters and desist from unsustainable populism.

(The writer is a former Director-General, Office of the Comptroller & Auditor General of India and is a Professor at the Arun Jaitley National Institute of Financial Management. The views expressed are personal.)