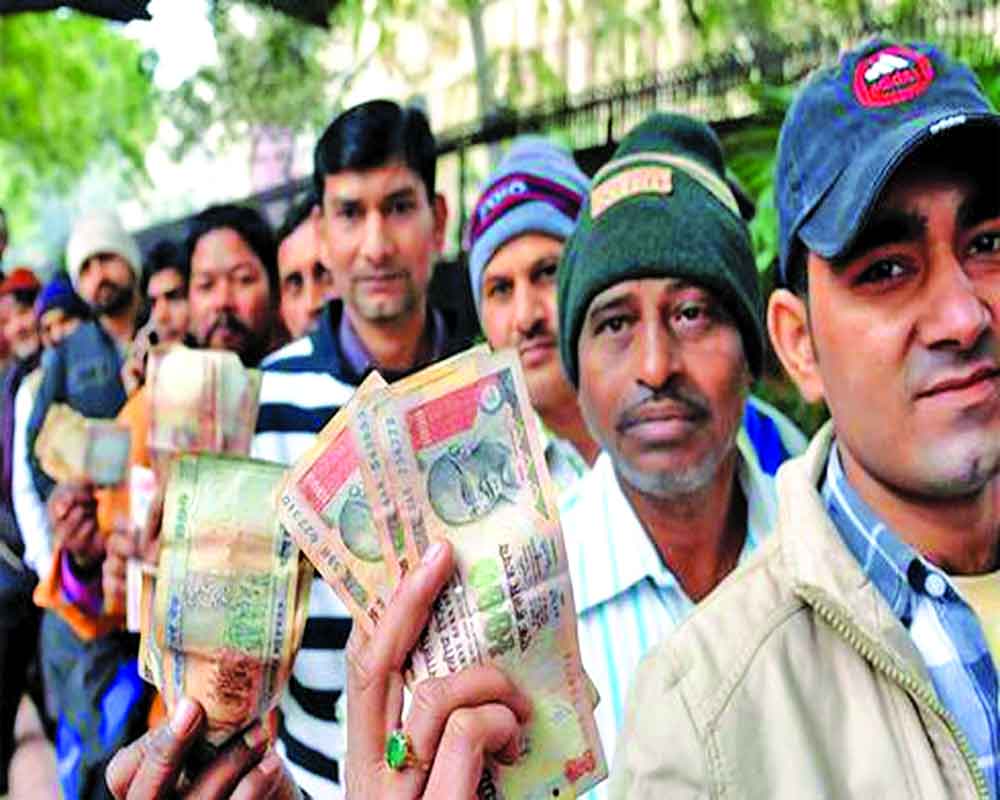 Reportedly, there are some 50 petitions pending in the country’s courts protesting the demonetization of currency notes that was implemented on November 8, 2016; we just passed its eighth anniversary. Understandably, this move by the Narendra Modi government continues to generate much talk. In all, I have witnessed three demonetizations and therefore feel qualified to comment on the subject. In 1946, the old 1000-rupee note was demonetized. In 1978, high denomination notes were rendered invalid. We are today debating the 2016 decision.

In the pre-Modi era, it was widely believed that approximately 50 per cent of the Indian economy generated in the country could not be tapped at all for purposes of development. The black money had to be spent in less productive activities like land deals, property transactions and what not. Such money had to be spent quickly in order to keep it away from thieves and from income tax vigilance; its mention in any legal document was not possible. The tax-evaded money could neither be legally invested nor safely saved for even one’s children, not to speak of national development. In brief, black was money only for the time being, in contrast to the bankable money, which was actual wealth.

What was unusual about Indian black money was that it was reported to be manufactured in our neighbouring countries. For example, superannuated Bihari cows used to have a ready market at fancy prices. West Bengal traders used to buy our toothbrushes readily; more especially if one did not write a bill and accepted cash. In the event the notes paid happened to be jaali (counterfeit) one would had been informed at which shop one could change it back to a valid note. When the thunderbolt of the 2016 demonetization burst upon India, everyone up to the upper middle class was able to change their cash. Those who were hit were the people who had hoarded large sums of black money and could not change their notes. On the morrow of the occasion, many an economist or an intellectual began using the term “informal economy” for the black economy, because it is inappropriate for a respectable person to plead for something illegal.

The result of the action was to get rid of the hoarded cash lying wastefully. However, its greatest service was to interrupt for a long time, if not forever, the printing of Indian currency notes in neighbouring countries. Simultaneously, smuggling of goods was significantly reduced. Nevertheless, demonetization would have been a fleeting event, had it not been followed by the introduction of the Goods & Services Tax (GST).

I would like to bring in a personal experience in this particular regard. The sale of our toothbrushes increased within a fortnight. It was indeed a welcome surprise. Upon thinking further, we realized that quite a few of our competitors might not have maintained systematic records. Some of them were making brushes by simply sticking nylon into the plastic handles; they had brought these in on a friendly basis from, say, China. The history behind all this was that toothbrush manufacturing was for decades, reserved for the small scale sector. In short, overnight, an informal activity turned into a formal sector one. Apart from sales tax, the additional fear was that from the GST website and the income tax department could also monitor how much of what product was being sold by whom.

An incidental but a

drastic reduction in lorry transport time.  Post-GST, an interstate lorry no longer has to stop at every state border. The lorry’s photograph and registration are recorded by CCTV. Earlier, the vehicle had to queue up at the state border to obtain clearance by the states’ sales tax authorities. Up to 40 per cent travelling time has thus been saved.

Without the GST, the demonetization move of eight years ago would have been say, a birth without a life to follow up. And without demonetization, the GST might have been a life without a birth. Yet another advantage of GST has been the abolition of most other indirect taxes, starting from the excise duty. Imagine the expenditure saved to the taxpayer on the one hand and the governments, beginning with the Centre, and ending with the states, small and big. As a guess, at least one-third of India’s lorry time would have been saved. Above all, the tax has taken India towards its goal of one country one tax. Moreover, the demonetization has helped India avoid its exploitation by its neighbours. The veteran political analyst and economist S. Gurumurthy has likened the 2016 demonetization to a “financial Pokharan”, i.e., a nuclear strike against not only black money, but covert financial war against the nation.

Assuming that in the pre-Modi era, 50 per cent of India’s economy was black; at least half this amount is currently being ploughed back into the economy as white money. In that sense, India’s economy has become 25 per cent larger spontaneously. It is also a necessary step towards making India a more modern economy, which is the first necessary step, if we aspire to make the rupee into a convertible currency.