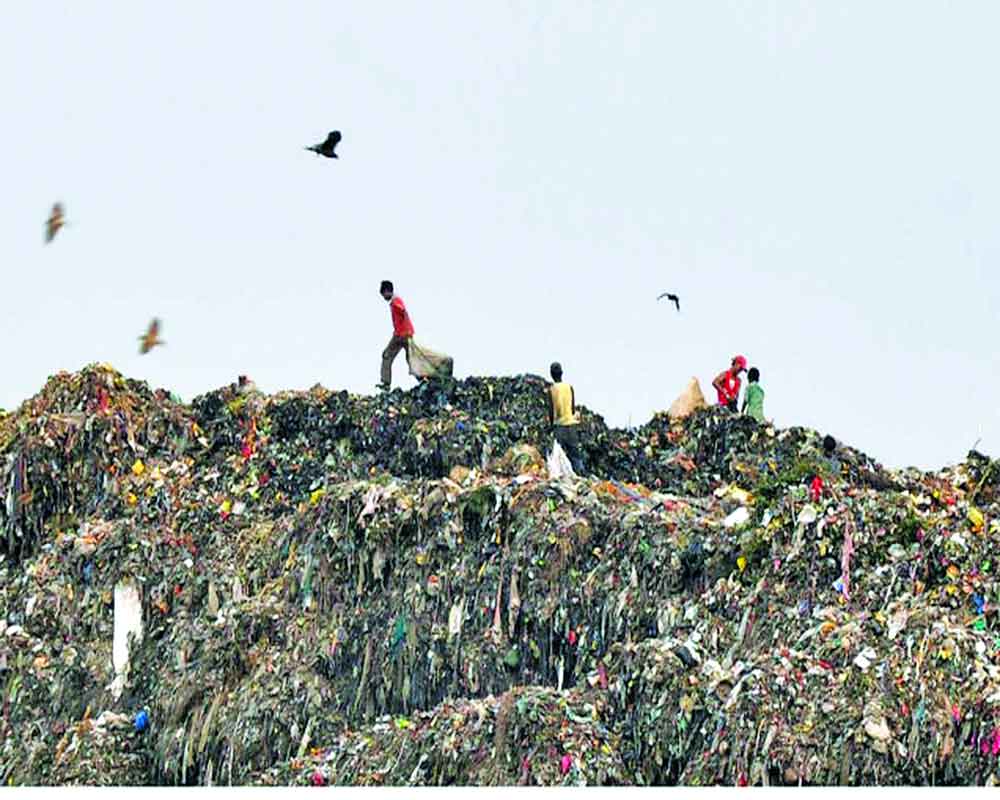 But AAP knows no governance, so municipal bodies have cut garbage hills without Delhi Govt’s help

In between 2011 and 2021, Delhi added over 32 lakh people to its population, besides adding about eight lakh households. This is a projected figure for 2021, and official data is still awaited. Delhi has steadily been attracting migrant population, for lack of opportunities in some of the states such as Bihar for the youth.

Indore in Madhya Pradesh, a few years ago, was faced with eyesores of landfill sites, rising like a mountain, as the city garbage gathered, while the population steadily grew on account of the thriving economy of the city and rise of the IT, pharmaceutical sectors following a benign policy regime of the state government. Within a short span of time, the municipal waste in Indore tested the administrative strength of the corporation.

But all changed with the Madhya Pradesh government taking the task to eliminate the garbage mountain eyesore. The municipal corporation was strongly backed by the state government with financial support to acquire men and machines for a turnaround. The state government liberally supported the Indore municipal corporation. The result was elimination of dhalao, segregation of waste at homes, processing of waste took place in several areas, stringent fines were imposed against littering, which included charges of even Rs 1 crore on hotels, hospital and restaurants, disciplined the stakeholders, and the landfill site mountain disappeared to give space for shopping centres and office complexes.

It has been wondered in several quarters why Delhi cannot replicate the Indore model and eliminate the garbage eyesores at Ghazipur, Okhla and Bhalswa. The answer is that Delhi is not blessed with a Madhya Pradesh administration, as the city government in the national capital works at cross purposes with the municipal corporations. The advertisement budget of the Delhi government alone could have helped the municipal corporations to substantially speed up elimination of the landfill sites. But the Delhi government since 2013 after the Aam Aadmi Party (AAP) came to power with Arvind Kejriwal as Chief Minister has shown rank betrayal of the governance norms. The Delhi government has worked to financially starve the municipal corporations. Still, the civic bodies have been steadfast in their commitment to improve the life of the people, and worked within the constrained capacities to cut down legacy garbage dumped at the landfill sites.

It may also be known that ‘Waste to Energy Plant’ has a total capacity of processing 5,250 tonnes of waste, which generates 52 MW electricity. The Tehkhand Waste to Energy Plant became operational recently, which brings the total number of waste to energy plants in the national capital to four. After the inauguration of the Tehkhand plant, the capacity for disposal of garbage per day in Delhi has increased by 2,000 metric tonnes and this plant will also generate up to 25 MW of Green Energy.

Additionally, 12,300 MT Bio CNG Plant, three Bio Gas Plants of 200 MT per day capacity and eight Metal Recovery Facilities of 175 MT per day capacity are about to come up at Okhla landfill site. Construction of the 3,000 metric ton waste to energy plant at Narela is to be completed by August 2025.

This shows that the municipal corporations on its own have been at the forefront in finding sustainable solutions to the solid waste generated in the national capital. It is also to be underlined that the strictness of the Indore model could not be deployed in the national capital due to the multiplicity of authority and also because of the Delhi government working at cross purposes.

If all hands were on board, the task of the municipal corporations would have gained the necessary speed and scale to eliminate the garbage mountains at three of the sites. But the Delhi government in the last nine years has worked with the single agenda to shame the national capital by making the civic bodies beg for their rightful share of finances which are sent by the Central government. This has caused delays in acquiring men and machines to deal with the issue of solid waste management.

Still, the municipal corporations worked through their revenue models by creating tourism spots to beef up their earnings. The Wonder of the World Park is one such example which has been created from the waste and has become one of the key tourist destinations in the national capital. Similar attractions have come in all parts of the country. In contrast, the Delhi government, which has the tourism department, has not created a single asset which can attract the tourists to the national capital.

It begs attention if even a fraction of the advertisement budget, which the AAP government splurges in states where the Kejriwal-led party contests elections, was spent in improving the civic amenities the national capital would have sported a brighter look. Why should the money of the people of Delhi be spent to promote AAP in Goa, Uttarakhand, Himachal Pradesh and Gujarat? Why should that money not be spent in boosting the capacities of the municipal corporations to improve the quality of life of the people in the national capital. Delhi wants accountability, not laments of the work shirkers.