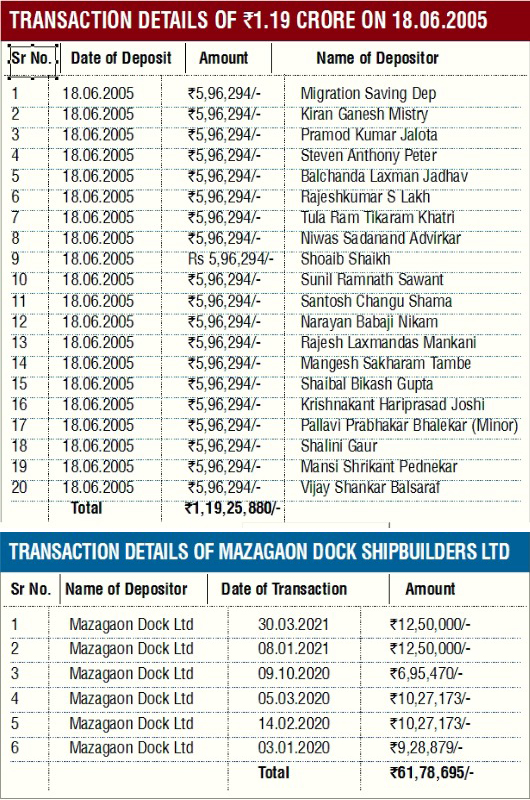 Imagine a donation of Rs 1.20 crore in your bank account on a single day deposited by 20 different persons with each transaction of equal amount. In all certainty, this would land you in the net of the investigating agencies, but this is not the case with self-styled environmental activist Medha Patkar, whose NGO Narmada Navnirman Abhiyan (NNA), despite receiving such suspicious funds, has evaded law enforcement for 17 years.

However, separate complaints have now been lodged with the Enforcement Directorate (ED), Directorate of Revenue Intelligence (DRI) and Income Tax Department against the Patkar-led registered trust.

Patkar did not respond to queries related to the questionable transactions sent to her over the email from The Pioneer. As a follow-up to the complaints, the Central agencies have already launched investigations into these transactions, sources said. NNA, an NGO registered on March 5, 2004 with the Charity Commissioner, Greater Mumbai region, of which Patkar is the settlor and the main trustee, on June 18, 2005, received a donation of Rs 1,19,25,880 in its bank account bearing number 001010100064503 in the Bank of India.

Interestingly, in just over a year of its formation, NNA received this significant amount in its account by 20 different individuals with each transaction amounting to Rs  5,96,294 on June 18,  2005. Surprisingly, one of these depositors — Pallavi Prabhakar Bhalekar — was a minor at that time. If this was not enough, the NGO has also received donations of nearly Rs 62 lakh from Mazagon Dock Shipbuilders Ltd (MDL) from January 2020 to March 2021 in six tranches of varying amounts. This is alarming in the light of the fact that the MDL is a Central Government undertaking under the Defence Ministry. MDL, formerly known as Mazagon Dock Limited, is a public sector shipyard located at Mazagaon in Mumbai and manufactures warships and submarines for the Indian Navy. It is also engaged in manufacturing offshore platforms and associated support vessels for offshore oil drilling, tankers, cargo bulk carriers, passenger ships and ferries.

The funds were transferred from the HDFC bank account of Mazagon Dock to the same Bank of India account number-001010100064503 of NNA through six NEFT (National Electronic Funds Transfer) transactions.

“These transactions amounting to crores of rupees clearly indicate that Patkar, who dons a humble and frugal persona, is flushed with money coming in from various sources that have so far escaped the Government’s attention. Patkar and her NGOs have a history of opposing every project/policy of national importance, be it Sardar Sarovar project, nuclear projects, coal mine projects and recently the CAA and the farm laws enacted by the Central Government. Such repeated funding from Mazagaon

Dock to an organization with such malafide motives is a matter of great concern,” said Sanjeev Kumar Jha, the complainant who is a resident of Ghaziabad.

Incidentally, Jha is the same complainant on whose complaint, the Regional Passport Officer (RPO) Mumbai had confiscated Patkar’s passport on the grounds of concealing vital facts.

The complainant has further alleged an “organized syndicate” behind such dubious fundings.

“These transaction details raise serious questions as to how 20 different people made identical transactions on a single day amounting to over Rs 1 crore. Generally, donations are made in round figures but what prompted these donors to deposit money in such odd figures is a matter of investigation. It also points towards an organized syndicate funding such as self-styled NGOs that have remained unnoticed so far. The source of funding and the mode of transaction is clearly a subject of detailed investigation as also the purpose behind such huge donations,” the complainant added.