Shah: India pushing for permanent secretariat for ‘No Money for Terror’

Shah: India pushing for permanent secretariat for ‘No Money for Terror’ 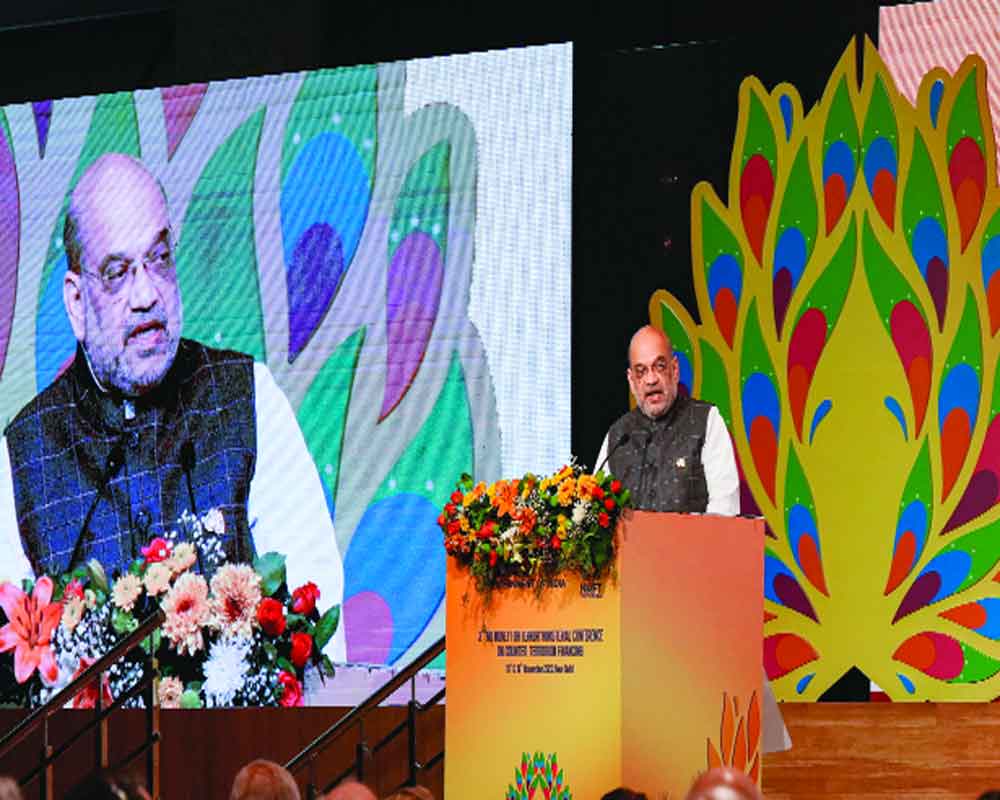 Union Home Minister Amit Shah on Saturday exhorted countries to adopt a strategy of “Trace, Target and Terminate” for economic crimes, and identify and act against institutions radicalising the youth.

He announced that India is pushing for a permanent secretariat here for “No Money for Terror”, a multilateral counter-terrorism financing agency.

While delivering his concluding remarks at the closing session of 3rd No Money For Terror (NMFT) Conference (Counter-Terrorism Financing) here, the Home Minister said during these two days of the conference, the delegates discussed emerging trends in terror financing, misuse of new emerging financial technologies, and international cooperation in the field of terror financing to effectively achieve the objective of No Money for Terror.

During the deliberations, India has sensed the need for permanency of this unique initiative of NMFT, in order to sustain the continued global focus on countering the financing of terrorism and now the time is ripe for a permanent Secretariat to be established.

“In order to take this thought forward, the Chair Statement includes the offers to establish a Permanent Secretariat in the country and shortly, India will circulate a discussion paper to all Participating Jurisdictions for their valuable comments,” he said.

“Cyberspace today has become a major battleground in the fight against terrorism. There have also been multiple changes in Weapons Technology too and these 21st century lethal technologies and drone technologies are also accessible to terrorists now,” he said.

The growing links of terrorism with organised crimes such as narcotics, crypto-currency, and hawala, have increased the possibility of terror financing manifold, he said.

The primary goal of this conference is to identify various channels and ideate a practical and workable roadmap against terror financing and identifying its various channels, he said.

According to an estimate by the IMF and the World Bank, criminals around the world launder around 2 to 4 trillion dollars every year. And a major part of it goes to fuel terrorism. Considering the quantum and challenges, the agencies and authorities working in the areas of counter-terror and terror financing, have to adopt a long-term strategy, he said.

Shah drew the attention of the delegates towards six priority issues for the NMFT as the terrorists understand information technology and cyberspace very well and they also understand the sensitivity of the public and tend to exploit them.

Other priorities highlighted by Shah include prevention of the use of Non-Profit Organisations, NPOs Sector to Spread Terror Ideology and continuous capacity building of counter-terror and financial intelligence agencies of all countries.

Underlining that the conference will also help in moulding this discussion into strategic thinking in the days to come, he also presented a roadmap for the NMFT.

He also said that all countries will have to agree on one common definition of ‘terrorism’ and ‘terror financing’, because it is an issue of the protection of citizens, and their human and democratic rights, it should not become a political issue.

Shah said that across all stages of terror financing, such as fund-raising, fund movement, layering through other crimes, and finally, usage for terrorist activities, have to be cracked down at each stage and each stage requires a “specific but collective approach” on a global scale.

The Union Home Minister said that all countries must implement the standards, and recommendations set by the Financial Action Task Force, FATF, not just on paper, but in spirit.

Shah said that “this is a unique forum for participating countries and organizations to discuss the effectiveness of the current international regime of combating the Financing of Terror, and to discuss solutions to emerging challenges.”

Asserting that terrorism, today, has taken such a formidable form, that its effects are visible at every level, the Union Home Minister said, “Terrorism is the biggest enemy of democracy, human rights, economic progress, and world peace, which we cannot allow to succeed.”

“We cannot think of a fear-free society, a fear-free world without an effective, long-term, concerted fight against all forms of terrorism. The citizens of our nations have entrusted a bigger responsibility of their protection to the leadership, and it is our duty to live up to this responsibility,” he said.

Over the past two decades, the United Nations Security Council has developed a framework to deal with this threat, with the main objective of creating a “counter-terrorism sanctions regime”. He said that this system established by the United Nations has successfully curbed to some extent, the actions of countries that make terrorism a state-funded enterprise, but it has to be further strengthened, made more rigorous, and transparent, he said.

Underscoring that the foremost commitment should be cooperation with transparency and all countries and organizations must pledge complete transparency in sharing intelligence in a better and more effective manner, he said that this war against terrorism and terrorist groups has to be fought in every geographical space, in every virtual space.

Shah said that there have been many instances when, under the guise of other motives, some organizations promote terrorism and radicalization at the national and international levels.

He noted that it has also been found that these organizations tend to become the medium of financing terrorism.

In remarks aimed against the Popular Front of India (PFI), Shah said that recently, the Government of India has banned an organization that conspired to radicalize the youth and push them towards terrorism and that every country should identify and take stringent action against such organisations.

Shah said that some countries, their governments and their agencies have made ‘Terrorism’ their state policy.

“In these Terror havens, it is necessary to shackle their unrestrained activities along with a strict economic crackdown and all the countries of the world will have to make up their minds on this, rising above their geo-political interests,” he said.

He also emphasized the need to establish a comprehensive monitoring framework involving cooperation, coordination, and collaboration among all intelligence and investigative agencies coupled with the strategy of “Trace, Target, and Terminate”, to be adopted from low-level economic offences to more organized economic crimes

“To stop the borderless finance movement that supports terrorism, we also have to accept the approach of ‘Beyond-Border Cooperation’, among us, only then this platform will be successful,” he added.