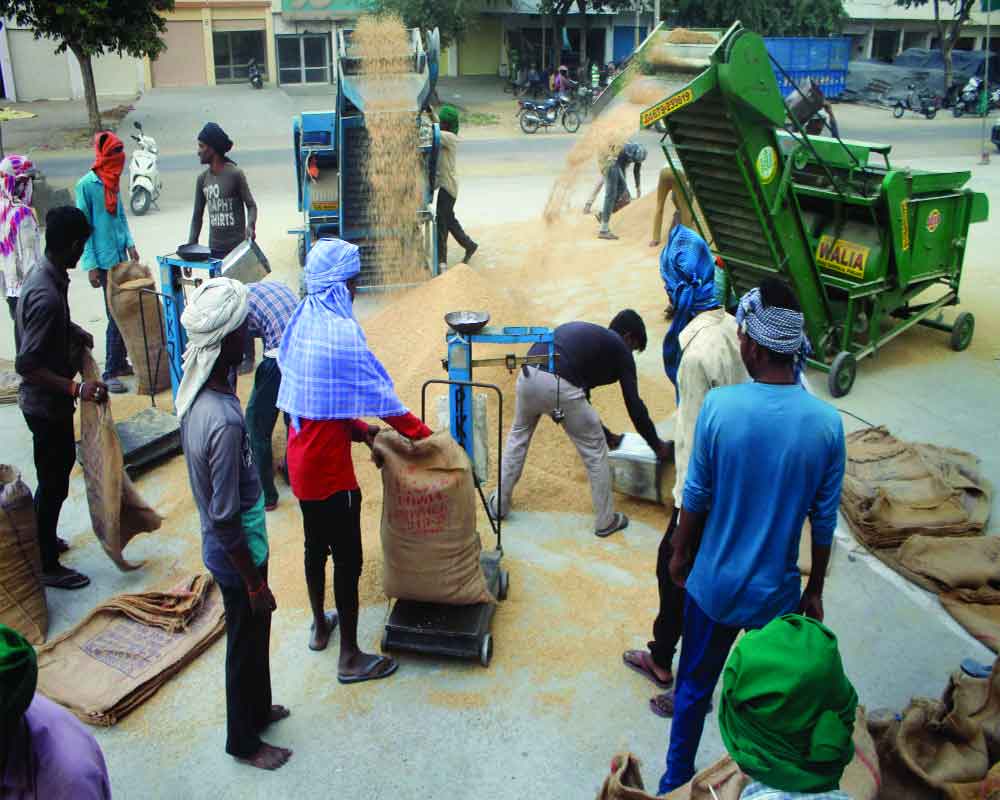 At a time when India is staring at a likely food grain shortage due to less sowing of kharif crops, especially paddy, unexpected rainfall in several States has damaged ready-for-harvesting crops such as rice, soya bean, cotton, pulses, and vegetables.  This could further stoke inflation in the fifth largest economy in the world.

It is expected that 15 to 20 per cent summer sown crops could be damaged due to unseasonal rain. The India Meteorological Department (IMD) data showed that India received 57.3 mm rainfall as against the normal of 34.3 mm between October 1 and 10.

According to sources, the Government agencies are yet to assess the summer crops loss. “But preliminary report has indicated this year’s excessive monsoon rainfalls in October may prove costly to the farmers as it may pose risks for summer-sown crops such as rice and the plantation of wheat. The State Government agencies have been asked to start assessment of summer crop losses due to unexpected rain across the country,” sources said.

Dr Binod Anand, secretary general of Confederation of NGOs of Rural India (CNRI), who is a member of the high-level committee on MSP set up by the Ministry of Agriculture, told The Pioneer that 15 to 20 per cent summer-sown crops have been damaged due to heavy rain in October.

“That could lead to a reduction in yields and deterioration in harvest quality since crops were ready for harvesting and in some places harvested crops were already drying. This will not only impact the current food grain situation in the country but also impact the export scenario in the coming days”, Anand said. “

The crops sown late may survive but their quality will be inferior. Crop damage is likely to push already rising food prices up,” he added.

Indian Agricultural Research Institute (IARI) Director AK Singh said that the current spell of rain is not good for early sown varieties of the kharif paddy crop, the harvesting of which is underway in many parts of the country.

“But these spell of rain bode well for late sown and longer duration (155-156 days) paddy varieties, which are in the flowering stage in parts of Uttar Pradrash, Bihar and the eastern States as well as some southern States like Andhra Pradesh,” he added.

“The fact is rain is not good at this critical time. Early varieties of paddy that mature in 125 days are caught in the current rain. These varieties are now matured and some of it is already harvested. Currently, many of the late-sown paddy varieties are in grain filling stage. At this stage, rain followed by wind may result in loss,” he said.

For instance in Punjab, area under early sown varieties is about 10-15 per cent. Much of the early varieties such as PR126 and basmati rice varieties 1509 and 1692 are harvested in the State. Some crop is already harvested and lying in the fields or mandis, he said.

Currently, harvesting of paddy, the main kharif (summer) crop, is underway. Over 80 per cent of the country’s rice production is grown in the kharif season. According to Anand, these rains augur well for eastern India, especially parts of Uttar Pradesh, Bihar and West Bengal where late sown varieties of paddy are cultivated in about 3-4 million hectares area. The late sown paddy varieties in eastern India will mature post November 15.

The IMD said Arunachal Pradesh, Bihar, Jharkhand, Odisha, Uttar Pradesh, West Bengal, Madhya Pradesh, Punjab and Haryana are among the States which received maximum rains 400-500 per cent in October. The southwest monsoon official ended the 2022 season with a cumulative rainfall of 925 millimeters, which is 6 per cent more than normal.

“But this year the cycle was delayed by lower rainfall in June and while crops are now ready for harvesting, an area of low pressure is bringing heavy rainfall in north-western and eastern parts of the country and delaying the end of the south-west monsoon,” said an IMD official.

The Agriculture Ministry data showed overall paddy sowing area in the kharif season at 40.2 million hectare (mh) which was 4.7 per cent less than year ago. The data showed that area planted to paddy remained at 402.88 lakh hectares (ha) so far this kharif season of the 2022-23 crop year(July-June), as against 423.4 lakh hectares in the year-ago period, 20.16 per cent less as compared to the previous year.

Agriculture supports half of India’s population and accounts for nearly 15 per cent of the country’s nearly $3 trillion economy. Monsoon rains are critical for India’s farm-dependent economy because nearly half of the country’s farmland is irrigated.

Farmers usually plant summer-sown crops in June-July with the arrival of monsoon rains, with harvesting starting from mid-September.

In the first half of the monsoon season, insufficient rain in eastern and northern India hampered rice planting, forcing the Government to reduce output estimates and cap exports in order to ensure adequate supplies for the country’s 1.4 billion people. The restrictions followed a ban on wheat exports imposed after the crop was shriveled by a sudden rise in temperatures in March.