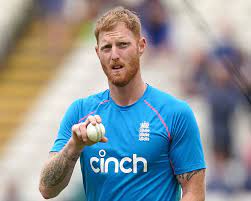 Several England players, including captain Ben Stokes, are feeling unwell on the eve of the team's first cricket Test in Pakistan in 17 years.

Only five England players -- Harry Brook, Zak Crawley, Keaton Jennings, Ollie Pope and Joe Root -- turned up for training at the Pindi Cricket Stadium on Wednesday. The rest of the squad members stayed back in the team hotel.

Team spokesman Danny Reuben didn't elaborate on the nature of the illnesses or give the exact number of affected England players. But he said in a statement that the unwell players "have been advised to stay at the hotel to rest up."

In the absence of Stokes, the Pakistan Cricket Board had to postpone the trophy unveiling of the series by a day and the ceremony will now be held on Thursday ahead of the toss for the first Test.

England has already named its playing XI for the opening game of the three-match series with all-rounder Liam Livingstone set to make his Test debut while Ben Duckett was named as opener with Zak Crawley.

England last toured Pakistan in 2005 and is scheduled to play three Test matches at Rawalpindi, Multan and Karachi.