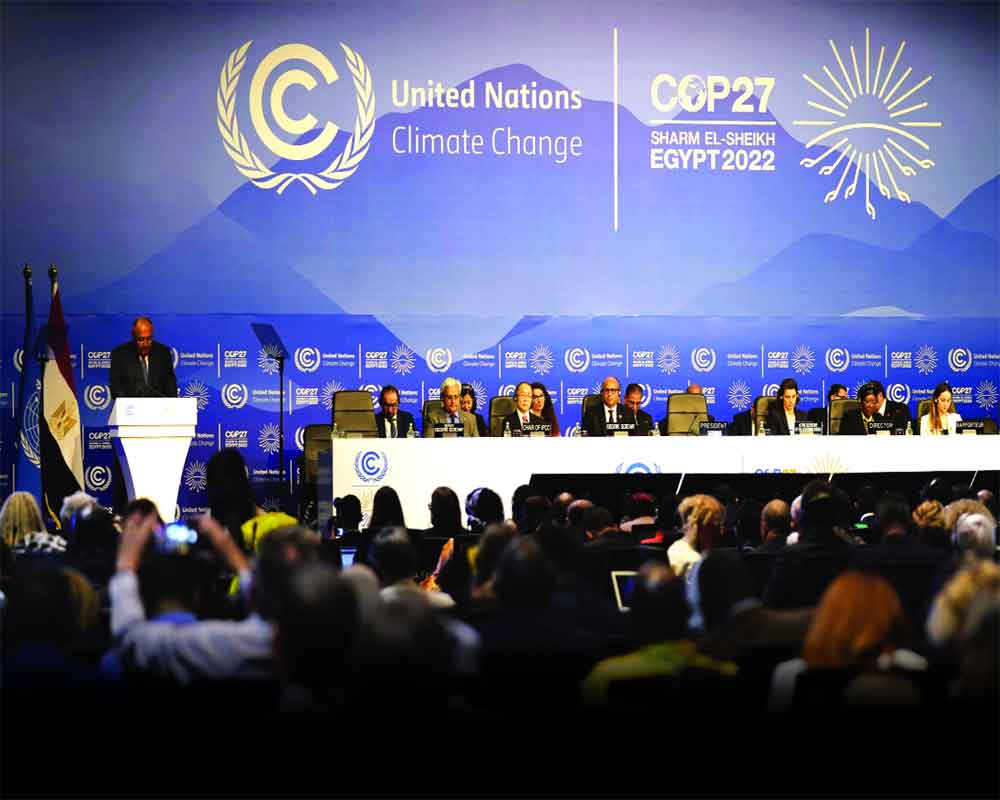 Considering the past actions on the commitments of the developed world, this so-called deal arrived at CoP 27 is at best  a face-saver document, writes Dr. VK Bahuguna

The Conference of Parties (CoP), better known as CoP27, organized by the United Nations Framework Convention on Climate Change (UNFCCC) secretariat at Sharm El-Sheikh in Egypt ended on November 20 with the adoption of a declaration for the creation of a fund for providing compensation to the poor nations facing the vagaries of climate change and extreme weather conditions due to the past emissions of the rich nations.  The negotiating teams and others are touting it as a historical deal, but that is a far-fetched claim.

This declaration at best is a face-saving deal for the consumption back home for people of these poor nations facing the wrath of climatic vagaries. The developed countries, however, have resisted these calls, fearing opening up a floodgate for compensation claims but ultimately agreed with no surety to adhere to their commitments.

On average, $4000 was needed for one person for a week to attend the CoP. Understandably, many young activists could not attend the Conference due to a lack of funds, and few bothered to raise their voices.

However, the CoP opened with most heads of state and leaders heading the country delegations speaking with strong feelings on taking action for the survival of the human race and pleading forcefully against complacency. The UN secretary general António Guterres delivered one of his best speeches yet when he exhorted the world leaders that “We are on a highway to climate hell with our foot on the accelerator”. He asked the countries to “cooperate or perish”.

The CoP 27 came after the world had faced the Covid-19 pandemic which many scientists blame on the abuse of nature by humans, a fact  clearly visible during the lockdown period when we all noticed clear Himalayan peaks from Delhi as the sky became clear and the wild elephants started roaming on urban roads they never visited before. After Covid-19,  when the Russia-Ukraine war pushed the global oil and gas prices and the natural disasters world faced, it was expected that climate change would be taken seriously by the world community. But the negotiators from powerful countries did not change much as is evident from the deliberation at the end of CoP 27.

From the point of view of professional analysts considering the past actions on the commitments of the developed world, this so-called deal is a vacuous statement at best. The deal stipulates that a mechanism will be established for the creation of funds for helping the least developed countries affected by the climatic vagaries like Maldives etc. The proposal includes mobilization of funds from private sources also. The document has clearly ruled out India getting any share of it rather it is expected to contribute in the fund. It does not fix any quota for the developed countries nor fixes a time frame for its implementation. The skepticism is arising because of the complete failure of the developed world led by the United States and European Union in meeting their previously agreed commitments of $100 billion in support to the poor nations on the flimsy ground and specious arguments like accounting procedures and lack of funds.

The approach of the developed world all through in all CoPs is to blame India and China for being the biggest emitters conveniently forgetting the havoc they wrecked on nature during the past more than 150 years and more. In 2021, China accounted for the highest 25% (15 billion metric tonnes) of global CO2 emission followed by the USA accounting for 11% (5 billion Metric tonnes) of the global total.   The European Union emits around 2.8 billion metric tonnes. India’s emission in 2021 was 2.7 billion metric tonnes which is around 7.5 % of the global emissions. The per capita fossil CO2 emissions in 2021 were 1.3 tC per person per year for the globe and were 4.0 (USA), 2.2 (China), 1.7 (EU27), and 0.5 (India) tC per person per year for the four highest CO2 emitting countries.

India will surpass China in population in 2023, but it cannot be equated with China in funding for climate change considering the country’s relatively low emissions. India's contribution to historical cumulative CO2 emissions is 3%, whereas the US. On the other hand, the EU  contributed 25% and 17% respectively to total fossil CO2 emissions from 1850 to 2019. China contributed 13%, the Russian Federation 7%, and Indonesia and Brazil 1%.

Thus there is no equity, justice or fairness in global climate change talks. The climate change negotiations, therefore, for most developing countries like India are proving a wastage of money and efforts as nothing concrete except our statements before the world leaders on our achievements on the Nationally Determined Targets on Paris agreement of 2015 and how much clean energy we are generating and how much trees we are planting and what is our road map for achieving net-zero emission by the year 2070. The agreement on the creation of funds to support the poor nation is just recognition by the developed world after protracted negotiations of their responsible for past emissions. Now, therefore, the issue should be taken up vigorously by the developing countries in all forums and India should launch diplomatic networking to safeguard its interests and the interests of the developing world for climate justice.

India and other developing countries in the CoP 27 meet had rightfully raised the issue of the gradual elimination of all kinds of fossil fuels. Thankfully, the developed world supported this, but the Russian and Saudi Arab vehement opposition blocked ti further progress. The Indian negotiators citing the Sixth Assessment Report of the Intergovernmental Panel on Climate Change had told the Egyptian CoP27 presidency that meeting the long-term goal of the Paris Agreement "requires phase down of all fossil fuels".

“Selective singling out of sources of emissions, for either labeling them more harmful or labeling them 'green and sustainable' even when they are sources of greenhouse gases has no basis in the best available science”, they contended.

The developed world has been demanding phasing out the use of coal in power generation which India and other countries cannot agree. The developed world’s hypocrisy is quite apparent on this as they have developed better alternatives for coal but on the issue of transfer of technology, they always duck the question. So neither they want to part with the technology nor they are willing to be liberal on funding the poor nations, yet they want to assume the leadership role in climate change dialogue. In a nutshell, the climate change talks regarding human welfare are proving bogus and a bore if we assess the progress since Kyoto Protocol was signed except a few successes obtained through Paris deal in 2015.

The global mean temperature will cross the 1.5°C limits in the current decade or next, and the 2°C mark during 2040–2060 as estimated by the Inter-governmental Panel on Climate Change in their sixth report. Lip service syndrome is best exemplified by the statement of Egypt’s government and subsequent decisions taken in CoP 27. The UN Secretary-General has commented that only the creation of a loss and damage fund is not a solution. The World Bank which is outside the purview of UNFCCD can pitch in effectively in tackling the fund position if the US and its European allies are genuinely committed to treating climate change as a top global priority and accepting their responsibility to do climate justice. This was also a reason why many countries were pitching for reforms in the World Bank, which is perceived as having failed to help with the climate crisis. What is the use of the World Bank funding poverty and water-related projects in poor countries when poor countries sink further into misery due to climate-related disasters?

In several areas, the temperature in India is already on the rise from 0.8 to even 1 degree Celsius. We have less time for negotiation and should strive for more time on action. Many experts feel that India should hold parallel climate change negotiations and lead the world.  The country should formulate some common action programme so that developing nations and China look inwards and help each other with technology and other resources. Efforts must be made to avoid disasters as the one Pakistan witnessed recently which wiped away  13 % of the GDP. Back home the dreadful memory of the Chennai flood will haunt for years. We need to declare climate emergencies in each country and support a programme to meet the emergency.

In the Indian scenario, we need to declare water scarcity and its poor management, agricultural uncertainties, soil degradation, and natural forest and bio-diversity depletion as a climatic emergency and emphasize alternative fuels for our transport and energy sector. Unplanned waste disposal, poor investment in natural resources, and population control must be the focus area in the overall climate action plan. Already the success is excellent on solar power generation targets. However, on climate change, world leaders should remember one quote by Zimbabwean Philosopher Matshona Dhliwayo “Busy hands achieve more than idle tongues.” Let us junk these half-baked dreams being sold in diffused glib negotiations and focus on concrete doable actions.

(The Writer is a  former Director-General in the ministry of Environment, Forest and Climate Change)