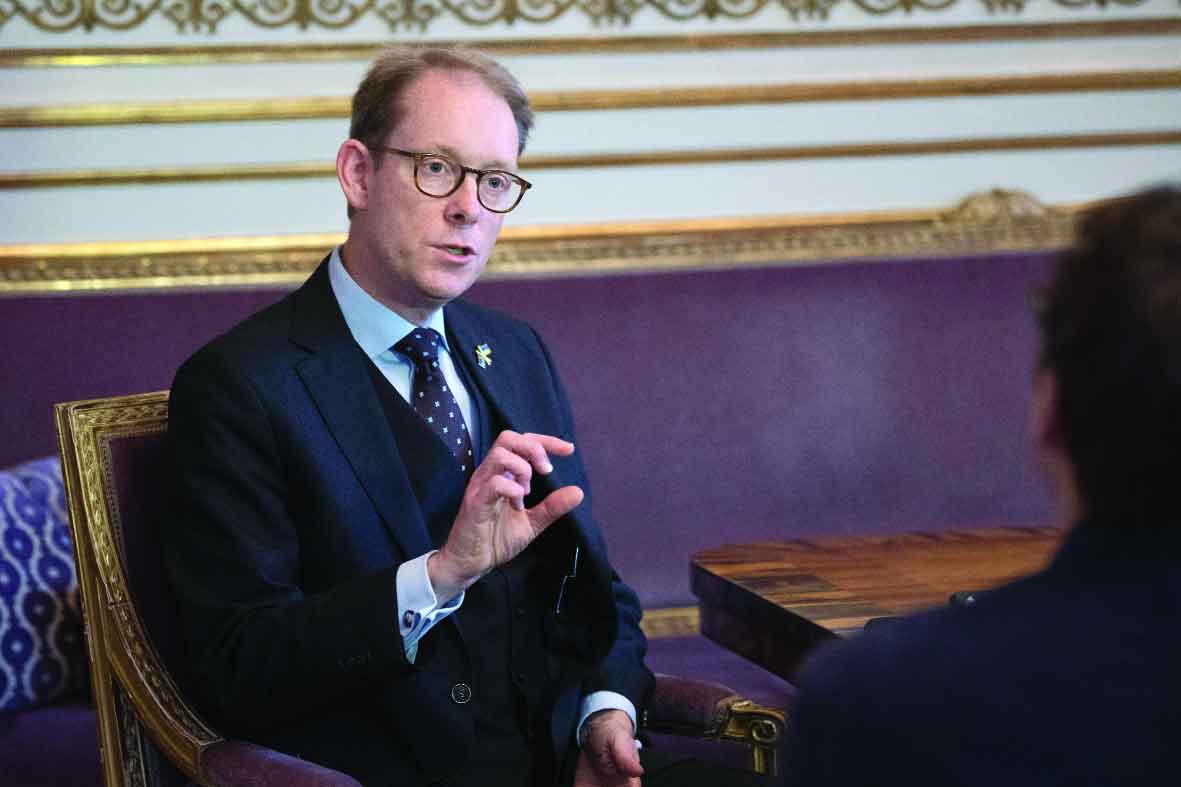 This discourse remerged in the public domain quite recently when Sweden’s foreign minister backtracked and dropped the “label” from its foreign policy lexicon. Sweden stands for gender quality both in practice and spirit, he said, and it would not “conduct a feminist foreign policy”.

Analysts state that this turnaround has stemmed from specific diplomatic faux pas and clashes which the Swedish Government had with Saudi Arabia with regards to honouring women rights. One of the justification was that domestically Sweden has an excellent record of gender equality and gender sensitive policy, and therefore as a label Feminist Foreign Policy seemed redundant. Significantly, given the volatile political climate in Europe, Sweden is also all set to become a member of NATO, which would require it to make certain policy decisions.

In recent years, multiple ways of approaching, representing and translating feminist foreign policy have been comprehensively debated, discussed, and talked about. These range from ways to innovate accountability framework, drafting National Action gender sensitive plans, international assistance, having special envoys for amplifying women’s needs and vulnerabilities, etc. Clearly, the articulation of a feminist foreign policy by these western states stems from clear priorities they have vis-a-vis their identities and influence in world politics. Supporting women in development projects have played an important role in empowering civil society organisations as part of their Official Development Assistance (ODA) goals.

While such practices that enhance representation and participation of women have indeed visualised women-related issues, some have criticised the idea as being an instrument of neo-liberal agenda which has emerged from Global North and is blind to contextual and cultural realities of Global South. Feminist Foreign Policy has also been criticised as it is preempted that politically correct language will be employed paying little attention to the translation of feminist ideas to liberate the national political culture from patriarchal tropes.

Sweden’s justification that it embraces gender equality in its institutional framework is suggestive of this defence, and how countries can take a guarded approach in qualifying their foreign policy as feminist.

If one casts a look at some of emergent discourses on feminist foreign policy from South Asia, limitations, contradictions and potential tensions become visible. Significantly, if one looks at the statistics on women and decision-making, women leaders have emerged from all walks of life from the national to local. In fact South Asia can be considered as one region where women have held prestigious leadership posts, including the Heads of State and Government. Significantly, it has also been a region of strong collective feminist mobilisation, where women collectives have played a critical role in challenging formal structures of power.

What is also visible in South Asia is the existing political culture which privileges patriarchal values and makes gender transformative strategies cosmetic in nature for differently situated women. The local governance reforms which focused on reservation of women for political representation and the micro-credit programmes hint at how norms are co-opted when they interact with cultural and contextual ecosystems.

Local governance debates aimed at women empowerment also told us that as a corrective measure, collective action and civic mobilisation which aimed at engagement, learning and socialisation often become important markers for creating empowered spaces, which then acts as a precondition of political and social change. Understanding how women groups and women leaders in South Asia adopted and employed alternative ways and methods to make certain voices visible thus becomes an important entry point for putting feminist foreign policy in perspective.

First, women leaders embraced both resistance and engagement while highlighting specific issues relevant to the rights of women. Thus, they contested practices which perpetuated gender inequality, and also reconstructed spaces, which could empower women voices. For instance, the women’s movement of the 20th century was phenomenal in their embrace of nationalist struggles towards independence, but did not give up this activist role, as their focus shifted from the country to socio-economic upliftment of women. Through solidarity politics, they aggressively reached out to engage with discourses which were taking place at the international level, ferociously participating in discussions for institutionalising these norms at national level and compassionately committing themselves to the translation of these norms at the local level. However, building alliances did not give it a homogenous character, and they retained their identity by celebrating and emphasising the plurality of feminism.

Second, the focus on both formal (representation of women in local governance structures) and informal (women collectives) institutions became an important part of feminist discourse. The term intersectionality, coined by African activist Kimberle Crenshaw, captures this process well. Crenshaw defined intersectionality as a lens to understand the sources of power and how it creates certain constraints in enabling and disabling certain actors, their voices, action and their journey towards empowerment. The diversity in South Asia in terms of class, caste, religion, and ethnicity helped address the complexity of power structures which works in an undifferentiated manner on the lives of women which belong to the marginalised as well as the privileged section of society. Since countering these invisible structural forms of power necessitated interventions at multiple scales which included the personal and public space, South Asia witnessed the rise of multiple informal women groups, the mahila mangal/mandal dals/parishad/samiti, as a response to give voice to unmarked, unrepresented, unheard voices. Feminism in South Asia thus stitched both the individual and collective, giving it an intrinsic relational, non-binary character.

Third, by focusing on informal ways of mobilising women groups around specific issue areas, which could challenge the formal structures of power they made substantive progress in their small worlds by achieving social and economic justice for the everyday lived realities of women and the marginalised. Thus, by focusing on issues which often got pushed to the margins the women’s movements in South Asia highlighted the need of a reflexive practice by highlighting that personal is political, which demanded self-reflection and activating the force from within as a means of empowering the awareness of the self.

What would be useful then is to develop a framework which can be transformative, reflective and emancipatory, which could focus on the situated perspectives of women and the marginalised. A feminist framework of foreign policy could help in shifting our gaze to those sites and locations which give a nuanced meaning to the practice of feminist foreign policy.

For one, feminist foreign policy should seek to develop strategies which can help to bridge the gap that exists between the rhetoric at international and national level and the translation of norms and policies at the local level. It should seek to formulate alliances with multiple actors, formal and informal, located at different scales, where translation of feminist principles of change is realised. These processes of transformation should aim at challenging those norms, practices which continue to exist despite the existence of progressive laws.

In order to craft such strategies, one needs to take inspiration from feminists, who adopted networked ways of doing politics, and perceived the world not as being constituted of separated but connected, interacting actors.  This alternative worldview which highlights the interdependencies between multiple actors not only emphasises the need for solidarity politics but also gives a very distinct meaning and explanation to how power works, which is defined in terms of its generative power stemming from connections and interactions rather than capability. Thus, rather than co-opting the feminist agenda into national frames, a networked way for diffusing feminist principles and ideas built around political, social and economic justice can be more useful in the long term.

Against this backdrop, it is important to see the international, national and local as a seamless connected space of ideas. This also means that adopting a feminist foreign policy at an external level, while having gender blind practices at domestic level would be inconsistent with the fundamental idea of transformational politics. Any call for a feminist foreign policy by governments in both Global North and Global South should take this complex challenge on board. As a way out, feminist movements in South Asia have significant lessons to offer, when it comes to the practice of resistance and engagement in international diplomacy. India becomes an effective case in point here.

From an active participant in the 1950s against decolonisation, racism, and imperialism, India has come a long way in world affairs. Its role as a swing state between China and the United States, and as an emerging power which respects international norms and commitment towards sustainable development and climate change, along with the green policies it has introduced at the domestic level, is shaping India’s identity as a lead player in development and humanitarian diplomacy. The SAGAR vision in the Indo-pacific, water partnership with European Union, Israel and Australia, among others and its inroads as a space faring nation indeed needs to be reckoned. However, paying attention to feminist methods and feminist ways of doing diplomacy and thinking can be a useful pointer to embracing the spirit of feminist foreign policy. Thus, trying to understand what a feminist vision stands for would also help it to bridge the gap between desirable and feasible, and make it more reflective in its ambitions. Resistance to understanding what feminist foreign policy entails would only perpetuate empty slogans and wishful thinking. In fact conversations with feminism which has a vision to offer is not very separate from the kind of ideals India has articulated in its foreign policy vision. Embracing activism and engagement has also been an integral part of Indian identity in world affairs.

So, a feminist foreign policy is not a set of template that one can adopt to fulfill a specific checklist, but is rather imbued with feminist practices of solidarity, connections, change and collective power. Women and marginalised groups do form important nodal points for facilitating dialogue and exchange, and development diplomacy imbued with a feminist vision helps in terms of opening channels of communication around issues which impact the smaller underdeveloped and developing nations in a different manner. Further, as one shifts the gaze to domestic realities of India, the marginalised and the poor are most vulnerable to non-traditional security challenges like pandemics and disasters.

Can India craft its own version of feminist foreign policy by being more reflective both at home and abroad? CT Mohanty aptly puts it, “(f)eminist practice operates at a number of levels: at the level of daily life through the everyday acts that constitute our identities and relational communities; at the level of collective action in groups, networks, and movements constituted around feminist visions of social transformation; and at the levels of theory, pedagogy, and textual creativity in the scholarly and writing practices of feminists engaged in the production of knowledge”.

These indeed are some words of wisdom for Indian diplomatic practice, thinking, and scholarship, and understanding what feminist foreign policy entails is central to this practice.