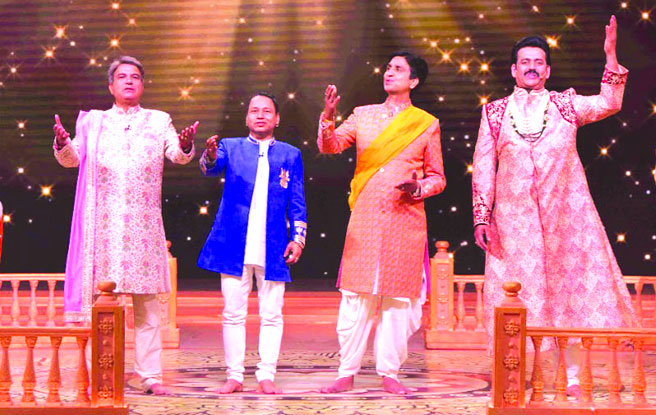 The present pandemic has once again thrown a curve ball. Music is the purest form of medium that resonates with everyone. Swarna Swar Bharat, a reality show on Zee TV, is a step in this direction, says SHALINI SAKSENA

The COVID-19 has once again thrown a curve ball making us pray for the good health and safety of our family and friends. We are looking for ways that can help us connect with him. Music, one is told is one of the purest forms of medium that connects our soul with God. Our scriptures talk about how sadhus and saints took to devotional songs to find a connection with divinity.

Keeping this in mind as the basic concept, Zee TV is all set to introduce the first-of-its-kind devotional singing reality show — Swarna Swar Bharat. One is told that the show will celebrate the country’s values and take us back to our roots through a unique blend of insightful and relatable stories narrated in verse and soulful devotional music.

Aparna Bhosle, Zee TV’s business head, tells you that music is the most organic and powerful medium for man to communicate with the powers above, irrespective of faith. “It is through devotional music; be it in the form of the flute, the shankh naad or chanting that most of us feel connected with divinity. Offering our audiences a few moments of solace while reconnecting them to their roots through devotional music and stories of Indian culture narrated in verse, we are happy to present Swarna Swar Bharat. This first-of-its-kind devotional singing reality show is a grand celebration of Indian culture,” Bhosle says.

What is even more interesting is that through fictional narrative being portrayed through magical realism, this show will bring us the stories of some of our immortal Gods and Goddesses like Lord Vishnu, Goddess Laxmi, Narad Muni, Ganapathi and Hanuman from the vedic texts and scriptures that are relevant even today.

Produced by Fathom Pictures and Kailasa Entertainment Pvt Ltd, this reality show is also humble contribution to the Prime Minister Narendra Modi’s initiative Azadi Ka Amrit Mahotsav that celebrates India’s rich cultural heritage on the occasion of the 75th anniversary of our Independence.

The show will have renowned poet Dr Kumar Vishwas, Padmashri Kailash Kher and Padmashri Suresh Wadkar as judges. Each of them have felt a strong connect with divinity through countless devotional songs that they have sung over the years. The show will present a talented bunch of singers from different parts of the country. Actor Ravi Kishan who was recently seen in MX Player’s Matsya Kaand, playing a cop, has ben roped in as the host.

Kher tells you that there a couple of reason how and why he came on board as a judge. First, this show is unique. “There is no other show like this one. The concept is new. I am thrilled that I was chosen not only as judge but am the co-producer too (Kailasa Entertainment Pvt Ltd),” Kher says.

He tells you that the concept of the show is such that it was not easy to execute. “The idea of the show was a brilliant one. But it was tough to put things in reality. It was necessary to give the team a boost that what they are doing is fantastic. Hence, we stepped in as co-producers,” Kher tells you.

Second, this is the first time in the history of television, music and film industry that entertainment and enlightment have come together. “We have avoided doing this in the past. But not now. The idea is to tell people that if your body, mind and soul aren’t healthy however much you may have risen professionally, there is no point in running after things blindly. People, through this show, besides being entertained will also be able to enrich their lives. The last two years have proved how helpless we have been in the face of COVID-19. It is time that we lived our lives that is aligned with nature,” Kher opines.

The show will be judged on the basis of sur, saar and bhaav. “Sur will be judged by Suresh Wadkar ji, saar by Kumar Vishwas ji (how important are the words, the lyrical value) and I will judge the bhaav (with how much devotion it has been sung). This time, we are not calling ourselves judges; we are guruvars,” Kher tells us.

For Dr Kumar Vishwas, the reason for coming on board is simple. Though he used to get many offers, he was looking for a show where what he had learnt could be used for a wider good. “I wanted to be part of a show where I could share tales of people who were proud to be called Indians; that I could share ancedotes on what these kids were singing. When I was approached by Zee TV, I saw no reason to turn it down. I am grateful to the makers of this show who explained the concept so beautifully,” Vishwas tells you.