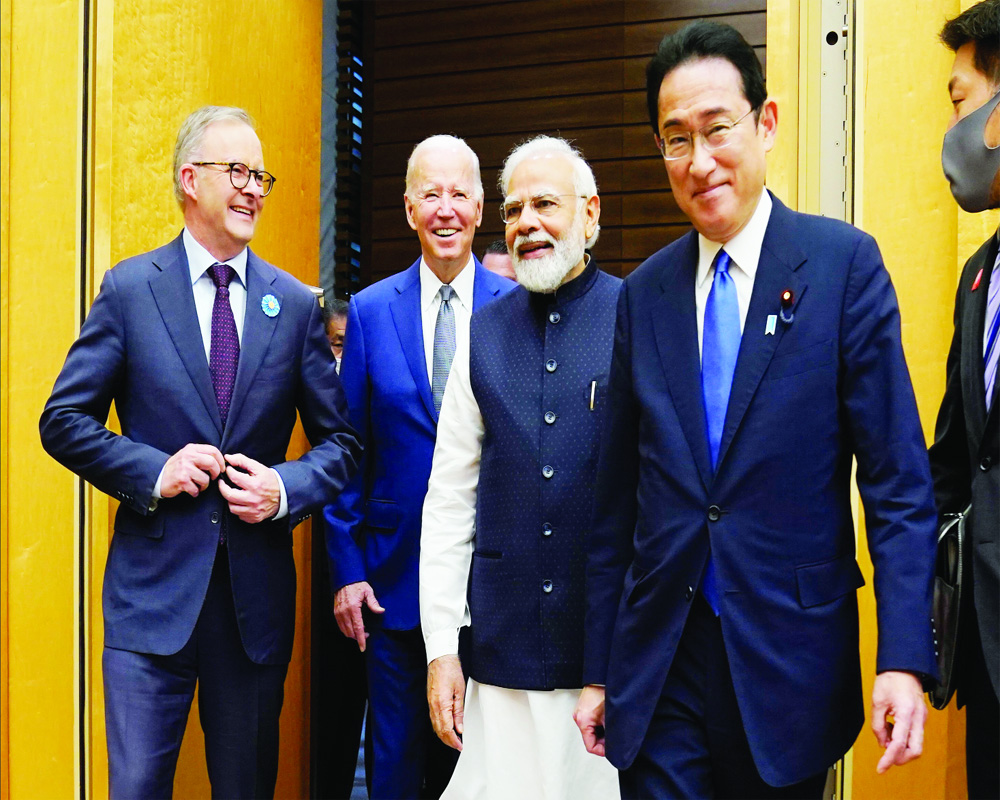 For India, which is not part of the China-led Regional Comprehensive Partnership (RCEP) trade agreement, the IPEF might emerge as a more reliable and credible alternative in creating new mechanisms in the Indo-Pacific

Following the initial announcement, the Biden administration released an Indo-Pacific Strategy in February 2022, which saw a formal iteration of the IPEF. As such, it bears no surprise to see US President Joe Biden officially launched the IPEF on May 23, 2022, in Tokyo before the QUAD leaders’ Summit.

In addition to the four Quad members, leaders from 9 other nations namely Brunei, Indonesia, South Korea, Malaysia, New Zealand, the Philippines, Singapore, Thailand, and Vietnam participated virtually. These countries became the founding members of the IPEF initiative making a “baker’s dozen”. Out of the thirteen participating countries in the IPEF, seven are also part of the Association of South-East Asian Nations (ASEAN). However, three ASEAN countries — Cambodia, Laos, and Myanmar — have refrained from participating in the IPEF.

The partial overlap of the IPEF with ASEAN reflects that the economic strategy has factored in China. The seven countries in IPEF which have overlapping membership with the ASEAN will help the US and its Quad partners to further consolidate the “ASEAN centrality” principle of the Indo-Pacific strategy.

Both Laos and Cambodia have perhaps been left out due to their proximity to Beijing, while Myanmar has paid the price for a non-democratic political functioning that continues in the country since the military junta grabbed power. That creating competitive structures against China lies at the heart of the IPEF has become clearer with the engagement of Taiwan in a similar bilateral engagement, albeit outside the IPEF.

In many ways, the IPEF is an offshoot of the re-invigorated America’s “Pivot to Asia” strategy launched in 2011 during the Obama administration. The strategy aimed to relocate the strategic focus of the US from West Asia to the Pacific theatre, primarily because of the competition and threats it faces from China. Besides, it also sought to advance the US’ economic and geopolitical interests through wider engagements with the Asia-Pacific region.

The two important constituents of this strategy were the Trans-Pacific Partnership (TPP) and the Indo-Pacific Economic Corridor. However, the US’ withdrawal from the TPP during the presidency of Donald Trump in 2017 deteriorated the progress made in terms of coalition-building and intensification of geopolitical and geo-economic ties with allies in the Indo-Pacific region.

The “Free and Open Indo-Pacific” strategy released in 2019 during the Trump administration gathered inimical reactions from the allies and partners in the region. It was perceived as a confrontational narrative rather than a regional strategy.

Therefore, the return of a new collective strategy by the US to collectively compete with China, at a time when the US dominance on the trade and investment is facing intense competition from Beijing in the region, may be a timely and well-calibrated step to instil fair and principled regional competition which is consistent with climate goals and predictable supply chains. China is the leading trade partner of almost all the IPEF member countries. As such, the IPEF initiative outlines the underlying thrust in building partner coalitions, developing a collective response and preventing the growing Chinese influence in the region.

Broadly, the evolving predicament within the IPEF countries is China using its economic heavyweight for achieving its security and diplomatic goals. The IPEF could present an opportunity for like-minded countries of the Quad to find new and reliable alternatives to their current dependencies on China, especially in trade related infrastructure and supply chains. In particular, for India, which is not part of the China-led Regional Comprehensive Partnership (RCEP) trade agreement, the IPEF might emerge as a more reliable and credible alternative in creating new mechanisms in the Indo-Pacific. India’s own FTA being negotiated with ASEAN could be consistent with some of the objectives of the IPEF.

Much of how the IPEF will unravel remains to be seen. The IPEF countries that are already part of some sort of Free Trade Agreements such as CPTPP and RCEP would require “substantial incentives” from the US to diversify their ties from any such already existing arrangements in the region.

Also, the four focus areas of the IPEF: trade, supply chains, clean energy, decarbonisation and infrastructure; tax and anti-corruption need to be implemented and assessed. While executing these focus areas, climate, labour and data localisation standards in the IPEF countries (which are not as per the US standards) might turn out to be prominent irritants.

(Vivek Mishra is fellow, Strategic Studies Program, ORF, New Delhi. Mrityunjaya Dubey is a researcher and Senior Assistant member with The Consortium of Indo-Pacific Researchers affiliated with the Journal of Indo-Pacific Affairs)