No quick fix for Sunak

No quick fix for Sunak 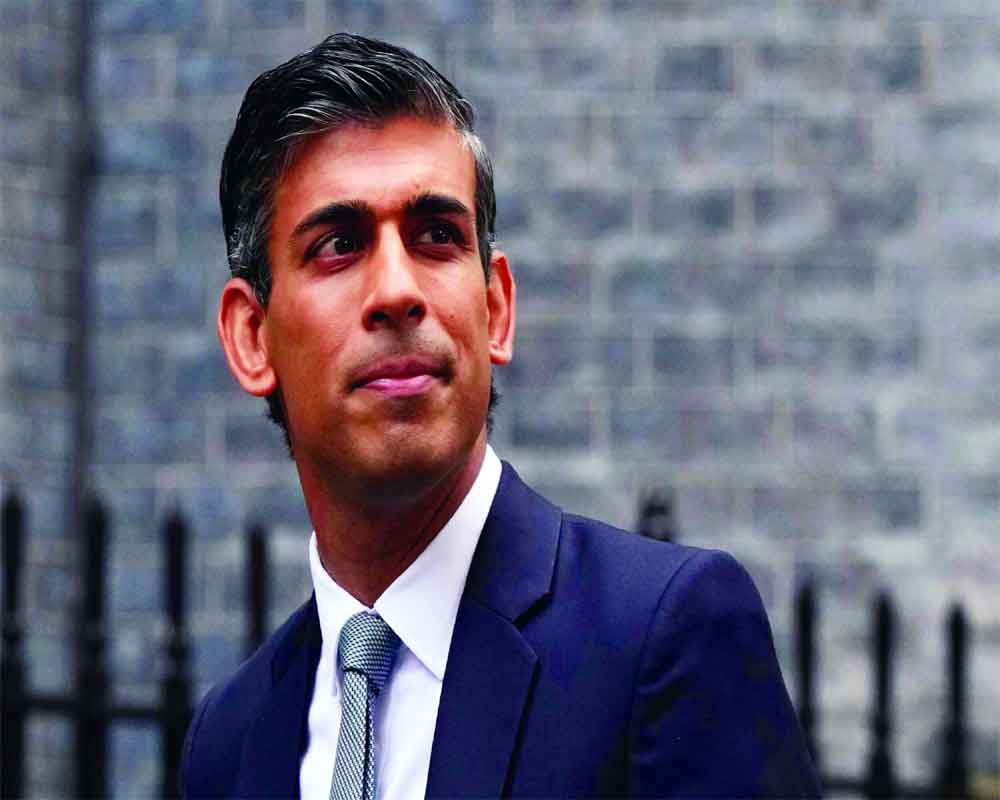 Brexit has ushered in a period of political instability in the UK. During the last six years, as prime ministers came and went (David Cameron, Theresa May, Boris Johnson, Liz Truss, and now Rishi Sunak), economic programs have been on the back burner and overseas investors on tenterhooks , writes Gaurie Dwivedi.

Rishi Sunak, the fifth prime minister in the UK since 2016, has many firsts to his credit: he is the first Asian and first Indian-origin prime minister of the UK. But what remains to be seen is will the youngest PM of the UK become the first leader to arrest the biggest decline of the country since the 1930s. A sea of economic challenges besets the UK, and the task of tackling them is bigger than what many envisage since the problems have been growing for over a decade.

Earlier this week, the Bank of England raised alarm bells when it warned that the UK is likely to slip into a protracted recession. The UK's Central Bank has also cautioned that the economy is performing worse than the US and the Eurozone. Significantly, post-Covid shock all advanced economies have recovered and are now faring better than the UK. The British economy, meanwhile, is showing signs of collapsing under the weight of its systemic problems. The Bank of England also warned that the UK's recession may be its longest and unemployment figures could double in the next two years.

On its part, the Bank of England, like other central banks around the world, is resorting to the only tool in its arsenal: tightening the monetary policy. But it has its own peril. When banks hike rates to tame inflation, the growth is adversely impacted. The Bank of England, in a bid to contain record high inflation, hiked interest rates by the biggest percentage since 1989. The aggressive increase has taken the base rate to 3 per cent. This is the highest level since the global financial crisis in 2008.

The rate hike will only compound Sunak’s problems as he tries to shore up confidence for his government, both among the British people and global investors. The sharp rise in rates will hit the poorest 10 percent of households very hard, since this segment spends twice as much of their budget on utilities and food, compared to the richest 10 percent. As per reports, for 8 million people who have fixed-rate mortgages, the rise in annual mortgage payments will kick in once their existing loan contracts expire. On average, this will be to the tune of 3000 pounds in additional pay. For more than 2 million households who are on variable-rate mortgages, the hit will be immediate.

Every politician worth his salt knows that rising mortgages are unpalatable, more so in an economy that is battling record-high inflation and unemployment. And Chancellor Jeremy Hunt acknowledged the pain that lies ahead when he said the rate rise was “going to be very tough for families with mortgages up and down the country.”

As Prime Minister Sunak and Chancellor Hunt work away in their next-door offices, they have just about a fortnight to deliver a statement that will repair trust in the UK economy. Or at least, avoid a political implosion that will make global investors even less wary of investing in the British economy. Sunak’s predecessor lost her job after investors began selling the pound against the dollar. Chancellor Hunt has stressed this aspect of his job when he reiterated, “The most important thing the British government can do right now is to restore stability, sort out our public finances, and get debt falling so that interest rate rises are kept as low as possible.”

But rising interest rates will be just one of the many grievances that the MPs will have to address as they head back to their constituencies over the next few days. The economic situation for the average British is set to become tougher.

Both the Prime minister and his finance minister (officially referred to as the Chancellor of Exchequer) are preparing for tax rises and large public spending cuts. These are the textbook replies to international investors who are worried about the UK’s rising debt and its falling currency (which makes debt repayment more costly). But to voters, these are measures that will reinforce the recession and contract an economy that has been in a state of inertia and low growth for over a decade now.

Welfare cuts have become a part of British politics and economics since 2010 when the age of austerity was rushed in. During the tenure of former chancellor George Osborne, except for the National Health Service, schools, and aid spending; all government budgets were slashed. Public sector pay was also frozen and taxes rose. These measures were in line with the publicly declared commitment to lowering the UK's high budget deficit, which was next only to America.

Three years later, though the government came close to achieving its fiscal consolidation target, these measures planted the British economy on a path of consistent underperformance of productivity and real GDP. Long periods of low productivity suck demand out of the system, which in turn stifle investment. In 2015, UK productivity, as measured by GDP per hour worked, was lower than the remaining G7 countries by a whopping 18 percentage points. The same year, David Cameron won a general election that was contested on a promise to further cut public spending. And of course, the following year came Brexit, which was touted as the panacea for all the ills and worries of the British economy and its future. Except that it has not.

Since 2016, the UK's political leadership has been in a state of Brexit-induced flux. And since many of its economic problems predate Brexit, they are now systemic and run deep. The UK's productivity growth, since the financial crisis in 2008, has fallen behind other advanced economies like France, Germany, and the US. This has resulted in median incomes in the UK being lower than its neighbours. This scenario is likely to remain, at least in 2023 when the UK is set to fare worse than all G20 nations, barring Russia. As per the Office of Budget Responsibility, which is the nodal body of Government finances, Brexit would further reduce productivity and UK GDP by a massive 4 percent. These official figures indicate that there is no easy quick fix for  Sunak, a passionate Brexitter.

Brexiteers like Johnson and Sunak had claimed that exiting the EU would deliver favourable trade deals for the UK. The UK has indeed signed 71 trade deals since exiting the common trading platform of the EU. But these deals are similar to earlier agreements under the EU. Consider this, it is estimated that the UK's GDP will increase by 0.08 percent by 2035 on the back of its trade pact with Australia. The UK has also signed trade pacts with Japan and New Zealand, but these are likely to yield similar results.

Brexit has ushered in a period of political instability. During the last six years, as prime ministers came and went (David Cameron, Theresa May, Boris Johnson, Liz Truss, and now Rishi Sunak), economic programs have been on the back burner, and overseas investors on tenterhooks.

For the Tories, though, stability tantamounts to more cuts. It seems UK’s long-awaited infrastructure schemes like the HS2 high-speed rail line, which has been delayed by nearly 15 years, could be one such casualty to the upcoming tough economic calls by Sunak’s government. As cuts deepen, so will any hope of reviving investments. And as investments dry up, so will the prospect of a long-term change in the UK's economic trajectory.

Osborne’s austerity measures in 2010 came at a time when interest rates were at a record low. And with energy bills under check, the Tories could push through the relentless slashing of public budgets. In 2022, Jeremy Hunt has no such luxury; his austerity drive will have both economic and political ramifications. It may be a quick fix to soothe the frayed nerves of global investors, but it will not be able to bring back growth.

With a general election in two years, Sunak needs to turn around the economy and fortunes of Tories, who are facing record-low popularity figures.

Almost fifty years ago, the UK faced stagflation, a global energy crisis, a current account deficit, and huge labor unrest. It had to be bailed out by the International Monetary Fund. It remains to be seen if the UK can avoid a similar outcome now. As the long British winter sets in and the Ukraine crisis shows no signs of ending, the scenario does not seem very far-fetched.

All eyes will be on Hunt’s November 17 statement.

(Gaurie Dwivedi is an author and a senior journalist. She is also faculty at the Department of International Relations,OP Jindal University.)