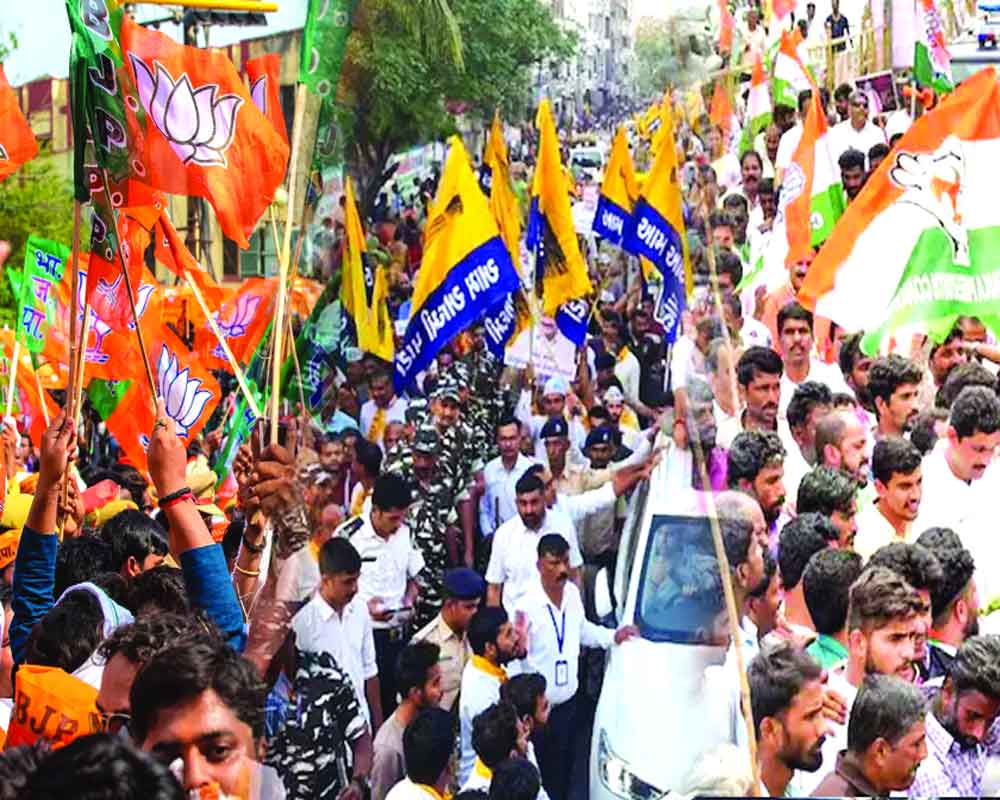 Despite so much debate and discussion of the revadi culture in the recent past, all political parties have gone all out of the way to offer sops to woo voters in Gujarat and Himachal Pradesh assembly polls, writes  Dipak Upreti

Childhood stories like that of  ‘Kabuliwala’ remind one of the street hawkers announcing their arrival and selling goodies like ‘budia ke baal’, peanuts, ‘channa’, ‘gazak’, and also ubiquitous sweet , ‘revdis’.

The last selling item has recently taken a political colour with no less a person than Prime Minister Narendra Modi himself giving a condescending look at the humble “revdis” and decrying what he called “revdi culture” of freebies spawned by certain political parties and more specifically by the Aam Aadmi Party (AAP) of Arvind Kejriwal ruling Delhi and Punjab and currently making a high-pitch foray in PM’s home state Gujarat.

‘Revdies’ themselves are popular sweat meat available even as ‘prasad’. But now all political parties are showcasing ‘Revdis’ in their poll campaigns to distract the voters from their political rivals to their own decorative election campaign carts..

The ‘freebies’ or ‘revdis’ , though, seen in the larger context, could also include tax cuts for corporate sectors, waving off of Non-performing assets, and also sanctioning projects and schemes in the poll-bound states by the ruling parties.

They have been in vogue for long but received currency of late in the political dialogue which is increasingly turning bitter unlike the ‘revdis’,  which have always been a good ‘time pass’ sweets for an average Indian to be taken without much fuss ...!

The debate raised is that freebies are a waste of tax payers’ money which should be invested in such a way that it institutionalizes benefits and that too on a ‘permanent basis’ and is unlike offering a free laptop, cycle or a monthly allowance without any accountability to available finances or the budget.

In a welfare state, free health, education, and a minimum subsistence allowance to poor should not be viewed as ‘freebies’ but be welcomed as a step towards positive discrimination.

For example, the ‘Janaushadi kendras’, under Central Scheme, offering allopathic medicines at less than half the market prices go a long way in relieving the pain of economically backward and middle class who are already facing the mercenary grind of an insurance-based healthcare system.

A free or highly subsidized health and education system catering to the economically poor section should be an obligation of the state and must not be considered ‘bad economics’ and part of the “ Ravadj culture” as has been made out by some of the advocates of ‘globalization’.

The poll-time ‘revdis’ are, however, polished goods whose shine go away, once elections are over and at a time never delivered or fulfilled.

In circulation on the eve of poll season,all political parties rigorously decorate their ‘election face ‘ with goods and items which could fetch them easy and enough votes to win. And like willy hawkers,  political leaders announce them in their manifestos as if these could be the vehicles of transformation in a developing country like ours.

Despite the Prime Minister’s disapproval of freebies, BJP’s Gujarat manifesto is full of revdis and has also drawn sharp criticism from the Congress and AAP, for its “striking commonalities” with the sops, guarantees or ‘revdis’ promised by them.

The AAP too has promised free education to all children. At a rally at Mahidarpura in Surat’s diamond market , the AAP candidate from Varachha, Alpesh Kathiriya, charged that the BJP manifesto was a “xerox copy” of the AAP guarantees.

Targeting the BJP, Gujarat AAP president Gopal Italia makes taunts , “When we announce our guarantees, the BJP calculates cost and tells us where will you get the money from.”

The BJP manifesto promises to provide free medical treatment by doubling the cap of ‘Pradhan Mantri Jan Aryogya Yojana’ to `10 lakh from the existing `5 lakh.

The Congress has also promised a `10 lakh free medical health cover to all citizens.

While the BJP has promised two free LPG cylinders annually for women under the ‘Pradhan Mantri Ujjwala Yojana’, Congress has pledged subsidized cylinders at `500 per unit.

Gujarat Congress spokesman Manish Doshi says, “The Congress manifesto announced well in advance forced the BJP to focus on education and health. Their promises follow ours.

“In 2012, when we announced the ‘Ghar nu Ghar scheme (promising houses to voters)’ the BJP promised to build 50 lakh houses, “ he says.

‘Revadis’ distributed by political parties, in the game of winning elections, are more or less the same except for their packaging and carry bags..!

Congress has pledged to write off farmers’ debt up to `3 lakh each in the state, while the figure promised in this regard by the AAP is `2 lakh. Both Congress and the AAP have promised electricity to farmers during the daytime for irrigation purposes.

In its manifesto, BJP promises to host Olympic Games in the state by 2036 and provide 20 lakh jobs in the next five years.

As part of their poll pledges, both the Congress and the AAP have promised 300 units of free electricity for people, which the BJP has not done.

Giving an example of the first Solar-powered village in Modhera in Gujarat Prime Minister sought to counter rivals by claiming that it is time to “sell electricity” instead of receiving it free.

As against the BJP’s promised 20 lakh new jobs in the next five years, Congress and the AAP have promised to fill 10 lakh vacancies in the state government’s departments and PSUs.

The party has also promised an unemployment allowance of `3,000 per month, `2,000 pension to ‘divyangs’, widows, senior citizens, and needy women, and waiver of loans of up to `3 lakh of all fishermen.

The AAP has also promised free water to farmers, `3,000 unemployment allowance, and a waiver of electricity bills

All three parties have promised assistance for cows and livestock and sought to milch cows for votes even though the emasculated bovines themselves are eating plastic in cities and towns of Indian streets.

While the BJP in its manifesto pledges to roll out “Pashu Aadhar cards” and subsidised cattle feed for calves, Congress has promised `5,000 for every family seeking to buy a cow. The AAP has promised `40 per day for the maintenance of each cow in the state.

Besides, the Congress has offered a `2,000 pension to ‘divyangs’, widows, senior citizens, and needy women, and a waiver of loans of up to `3 lakh for all fishermen.

The AAP has also promised free water to farmers, `3,000 unemployment allowance, and a waiver of electricity bills.

The women voters are being increasingly enticed by the political parties with the ‘revdi’ offerings with Congress in Himachal Pradesh promising monthly `1500 to each woman above the age of 18. AAP leader Arvind Kejriwal has offered `1000 monthly ‘financial assistance’ to all women in Gujarat above 18 of age saying “it is not a freebie but people’s money which is theirs “.

Leave aside Gujarat and Himachal Pradesh elections, the humble Municipal Corporation of Delhi elections have attracted a rainbow of ‘revdis’ by AAP, Congress, and the BJP too.

The ruling BJP in the MCD has promised to provide free cycles to meritorious girl students of class V studying in MCD-run schools in Delhi and to set up 50 ‘Annapurna Rasoi’ run by women in which citizens will get food at `5 !.

The ‘revdi culture’ could not be a substitute for real development lest there would not have been potholes, broken drainages, miserable hospitals, and schools without teachers. But when the political intent is to be in power and not the transformation of the ‘basics’ , ‘revdis’  come in handy to outplay the voters as deceiving lollypops. They are superficially created to treat the symptoms of ‘development’ but rarely contribute to it and create undesired inequalities and nepotism.

It would be apt to quote the traditional idiom to describe the crafty mist created by the political class during the poll season : “andha baante revdi, apne apnon ko de”, that is, a sightless person will distribute revdis only to his near and dear ones.

(The writer is Special Corrrespondent of The Pioneer)