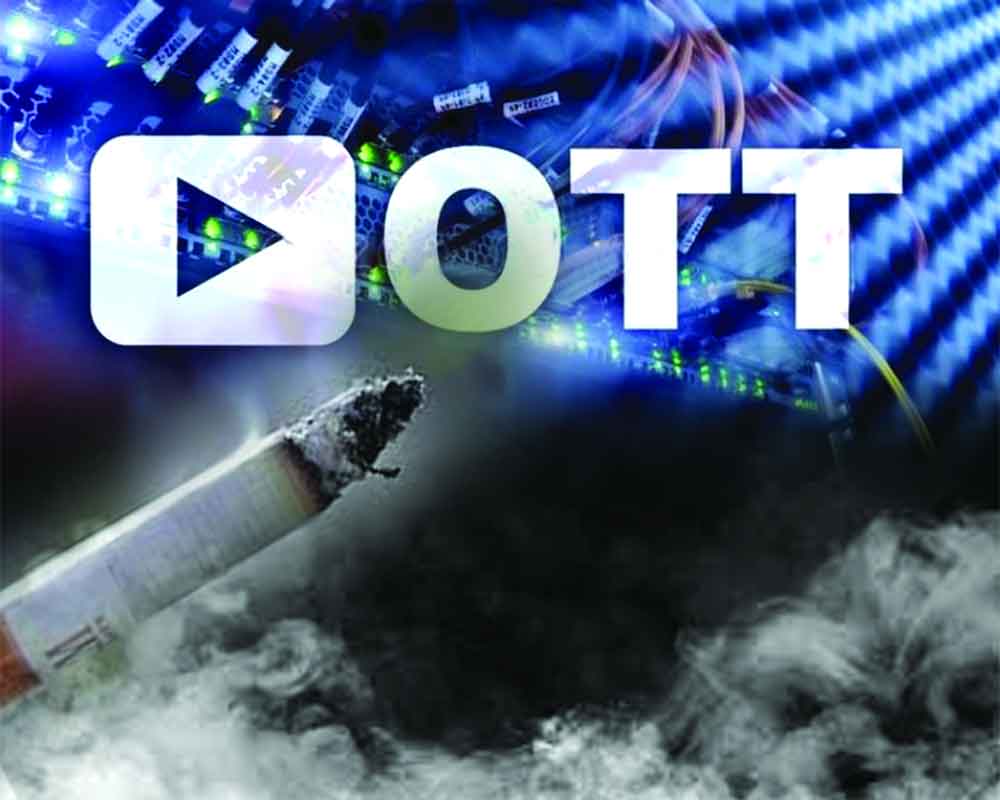 There’s an old saying when the cat's away, the mice will play. The same applies to Over-the-Top (OTT) platforms. With no written and clear laws regarding the implementation of tobacco disclaimers or warning labels on smoking scenes in the OTT web series, while the tobacco industry is trying to lure online viewers in a big way to trap them in the tobacco net, OTT media is busy raking in moolah through their advertisements. ARCHANA JYOTI takes a closer look at this fatal gap.

Thirty-year-old Rohan, a movie buff, has been a regular at conventional picture halls to watch films. He supports anti-tobacco health warnings as a prominent static message displayed at the bottom of the screen every time tobacco products are shown in the film. “Exposure to smoking in films is a recognized cause of smoking uptake among children. In an attempt to protect children, films containing smoking are required to include tobacco control messaging including audiovisual disclaimers, on-screen health warnings when tobacco imagery is displayed and anti-tobacco ‘health spots’ before and during the film,” he says.

With Covid-19 restrictions in place, Rohan has now shifted to OTT platforms such as Netflix, Amazon Prime and Hotstar to watch movies and his favorite programmes. But to his utter shock, he finds that the e-platforms streaming films and series have been blatantly displaying excessive usage of tobacco consumption. He was also surprised that there were no warning messages to caution the children and youth about the harmful usage of tobacco items.  “I am flummoxed at this violation.

In the absence of any clear regulation, OTT platforms are increasingly becoming favourite spots for the tobacco industry to hook the youth with their addictive products,” he observes as he cities report that estimate that the video streaming content is expected to exceed US$332 billion by 2025.

Rohan, who works in an MNC is not the only one who is worried at this dangerous trend but also wants a check on this fatal violation on the OTT platforms. According to a survey by the National Law School of India University, along with several youth organizations, at least 88 per cent of youth agreed that OTT platforms should be regulated like traditional television and film when it comes to the depiction of tobacco use. At least 82.5% of respondents agreed that tobacco use in shows and movies contributes to making tobacco use seem normal and acceptable, a reason enough to impose a check on such ads.

Taking umbrage at this defiance, health experts and anti-tobacco activists are seeking urgent regulation on the OTT content to protect youth from being addicted to tobacco products. Joining the cause, Vice-Chancellors across Karnataka too have requested Union Health Minister Mansukh Mandaviya to regulate OTT platforms to display tobacco warning messages.

Health experts contend that if such vacuums are continued to be allowed, gains made so far through tobacco warning campaigns will be negated. There is a need for better enforcement of existing Rules on streaming platforms in India, and modernization of the WHO Framework Convention on Tobacco Control, Article 13 guidelines to account for new streaming platforms to protect youth from tobacco imagery globally, they say. If brought under COTPA umbrella, the OTT will also have to adhere to COTPA regulation, which attracts a jail term of up to 5 years and/or a fine of up to Rs 5,000 in case of violation.

Says Bhavna Mukhopadhyay, Chief Executive, the Voluntary Health Association of India (VHAI), “The streaming media has become a haven for promotion of tobacco use and this extensive promotion is to undermine Government film rules and provisions that discourage tobacco use. We urge the Government to take necessary action to ensure these online streaming platforms are compliant with COTPA, relevant rules, and any other applicable laws in order to protect the children from exposure to tobacco products displayed on the OTT platforms"

Agrees Raghunandan Maachna, Enforcement  Deputy Tahsildar  Consumer Affairs, Food Civil Supplies Department in Telangana Government. He has been carrying out an anti-tobacco campaign for the last two decades, He strongly calls for bringing the OTT platform under the COTPA Act so that no program or films or series is streamed without any tobacco warning message.  OTT platforms are now very popular. So the Government must ensure that there is tobacco disclaimer whenever they show such scenes, he says.

“The viewership of OTTs has scaled at an extremely high rate in India, one reason for it being the sharp decrease in web costs and the other being, accessibility of multilingual and multi-regional content. Smoking is seen very often in such content, which must have a multi-level impact on its viewers,” notes Manan Goel from the College of Vocational Studies, Delhi University.

Goel along with his colleagues Parth Goel, Raghvendra Singh, Ritik Arora, Saanya Chawla, Utsav Agarwal, all from the College of Vocational Studies had conducted a study in 2020 and noted that smoking is seen very often in such content, which must have a multi-level impact on its viewers.

In their study, they tried to analyze the change in smoking habits, its impact, and also, the reasons behind the same changes and found that there is a direct link between viewing smoking scenes and an immediate desire to smoke. “The smoking propensities of an individual is impacted because of the hours spent watching TV series, and movies that contain smoking imagery. The correlation degree found between the number of hours spent on such TV shows, and movies and the number of cigarettes daily is small but the significance level does not reject the hypothesis. Thus, showing that smoking imagery does impact the viewers; increase in the number of daily cigarettes.”

The WHO too rings the alarm bell as it warns that every year the tobacco industry invests more than US$ 9 billion to advertise its products. Increasingly, it is targeting young people with nicotine and tobacco products in a bid to replace the 8 million people that its items kill every year.

Tobacco is a prominent risk factor for 6 to 8 leading causes of death and almost 40% of the Non- Communicable Diseases (NCDs) including cancers, cardiovascular diseases and lung disorders are attributable to tobacco use. As such the consequent burden of mortality and morbidity due to the consumption of tobacco is very high in India. The number of deaths every year in India which is attributable to tobacco use is almost 13.5 lakhs.

As per the Global Youth Tobacco Survey (GYTS) 2019, nearly one-fifth of the students aged 13-15 have used tobacco in some form. The prevalence of tobacco use among boys is 9.6% and among girls is 7.4%. The median age for initiation of cigarette and bidi smoking, and smokeless tobacco use were 11.5 years, 10.5 years and 9.9 years respectively.

Yet another study on “Tobacco imagery in on-demand streaming content popular among adolescents and young adults in India: implications for global tobacco control” highlighted that there is rampant depiction of tobacco use and tobacco brand placement. Many of the series showed tobacco brands as well as close-ups of tobacco products and tobacco usage. None of the series included anti-tobacco messages, spots and disclaimers. The shows with tobacco depictions included both foreign-produced and Indian-produced series and most were rated for viewers below 18 years, thus targeting youth and children, said the study published in BMJ.

Dr Monika Arora, Vice President and Professor at PHFI says, “We studied tobacco imagery in 188 episodes of the ten most popular series among 15 to 24-year-old Indian youth on Netflix and Amazon Prime Video. Our findings indicate that many shows had tobacco depicting imagery in it. None of the shows were compliant with tobacco-free film and TV rules under COTPA, 2003.”

Another study conducted in 2019 by KPMG reported that there were 325 million viewers of on-demand streaming platforms in India and that young people (age 15-24) spent an average of 70 minutes per day watching online video content, which has further increased due to Covid 19 restrictions.

A study conducted in Delhi too showed that adolescents aged 12–16 years with high exposure to tobacco occurrences in Bollywood films were 2.3 times more likely to have ever used tobacco compared with adolescents with low exposure.

However, the scenario is expected to change soon. But only if the  Health Ministry takes an urgent call on the matter. “There have been few rounds of consultations on the subject. A decision may be taken soon on bringing the OTT platforms at par with films screened in theatres and by cable or network TV broadcasters when it comes to adhering to the anti-tobacco warnings,” a senior health official said on anonymity.

Mukhopadhyay says if such a thing happens, it would be a trendsetter in the world.

“It’s a serious lacuna considering the far wider reach of the OTT shows amongst all the sections and age groups of society. OTT giants like Netflix and Amazon came to India in 2016, it is sad that till date there are no laws to control the content,” Anand Mishra, an advocate on record at the Supreme Court, said.

This study was undertaken in collaboration with HRIDAY, the Center for Tobacco Control Research and Education, the University of California, and Onebeyond LLC, California. The study also assessed the compliance of the content shown in these online series with the Tobacco-free Film and Television Rules in India. This is the first such study conducted in the country to generate evidence on the implementation of the tobacco-free films policy on streaming or over-the-top (OTT) on-demand video streaming platforms such as Amazon Prime, Netflix, and Hotstar.

In recent years, on-demand video streaming platforms such as Amazon Prime, Netflix, and Hotstar are rapidly becoming popular in India. Recent market research amongst Indians in the age group of 20–25 years has revealed that the time spent on these platforms range from 5 to 20 hours per week.

The study recommends the enforcement of Tobacco-free Film and TV Rules under the Tobacco Control Act of India for all content streamed on all web-based OTT platforms in India, whether produced within the country or internationally. In addition, the study also recommends that the current guidelines under Article 13 of the WHO Framework Convention on Tobacco Control (FCTC) pertaining to the depiction of tobacco in entertainment media should be updated to bring newer internet and mobile-based platforms under its purview.

As part of the study, 10 popular Web-series on streaming platforms like Netflix and Amazon Prime, were identified after discussions with participants aged 15–24 years in Delhi. These were content-coded for tobacco imagery using the peer-reviewed Breathe California protocol. Incidents of tobacco use and brand appearances in each series episode were counted, and compliance with extant Rules was recorded. In total, 188 episodes across 10 selected series from Netflix and Amazon Prime Video were coded for the content analysis of tobacco imagery and included: The Marvellous Mrs Maisel (rated 16+); Stranger Things (rated 16+); Bodyguard (rated 16+); Riverdale (rated 13+); Narcos (rated 16+); Sacred Games (rated 18+); Mirzapur (rated 18+); Chilling Adventures of Sabrina (rated 16+); 13 Reasons Why (rated 16+); and The Crown (rated 16+).

"The Tobacco-free Film and TV policy pioneered by the Government of India is an innovative approach to health education. This study highlights the urgent need to initiate a dialogue with digital content providers to ensure sterner compliance to the policy and help protect vulnerable age groups like adolescents and young adults from unnecessary exposure to tobacco imagery in entertainment content showcased on these platforms,” says Dr Roderico H. Ofrin, WHO Country Representative to India, taking serious note of the violation