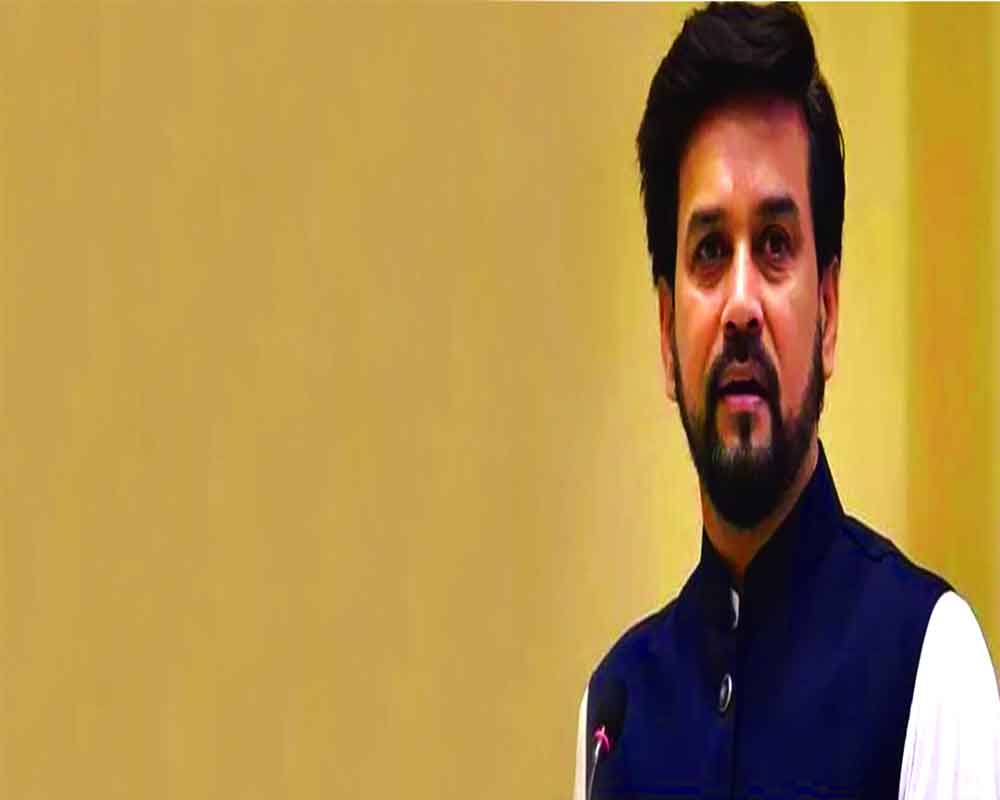 Notwithstanding, the red flag raised by Minister Anurag Thakur and judges of the Supreme Court,  TV debates continue to focus on polarizing topics. In many cases, the language and expression of the guests and anchors are both inflammatory and offensive. The  media has played little heed to such counsel for sobriety in the past as well. In its blind pursuit of TRP sometimes it becomes a real source of threat to peace and harmony of the country, writes Navin Upadhyay

The cat is out of the bag. Or it was always out in the open but everyone pretended to look the other way, till its low growl turned into a high-pitched roar and its threat menacing and imminent. No offenses to the canines, though; we are referring to the big cats of the TV screens.

Two back-to-back whistleblowing—first by Union Information and Broadcasting minister Anurag Thakur, and second by the Supreme Court of India— underline the threat posed by the TV anchors, to both the mainstream media itself and the peace and harmony of the country.

Notwithstanding, the red flag raised by the Thakur and judges of the Supreme Court, the TV debates continue to focus on polarizing topics. In many cases, the language and expression of the guests and anchors are both inflammatory and offensive. The media has played little heed to such counsel for sobriety in the past as well. In its blind pursuit of TRP sometimes it becomes a real source of threat to peace and harmony of the country.

Not for nothing, speaking at the 7th Annual Gathering and 20th Meeting of Asia-Pacific Institute for Broadcasting Development (AIBD), Thakur focused his speech on the threat posed by such dangerous debates.

The minister said inviting guests who are polarizing, who spread false narratives and who shout at the top of their lungs damages the credibility of a channel. “Your decisions regarding the guest, the tone, and visuals - define your credibility in the eyes of the audience. The view may stop for a minute to watch your show, but will never trust your anchor, your channel or brand as a trusted and transparent source of news”, he added.

Turning to the audience, the Minister asked “Are you going to watch as the younger audience switches and sweeps through the shrill on TV news or are you going to bring back the Neutrality in NEWS and Discussion in DEBATES to stay ahead of the game?”

A day later, on September 21, the Supreme court expressed serious concern at the hate speeches in the media and hinted that it might put in some regulations/guidelines to check the menace.

Upset that the Government has done nothing to curb the propagation of hate speeches in the media, the Court asked the Government of India "why it is standing as a mute witness when all this is happening".

A bench of Justices KM Joseph and Hrishikesh Roy was hearing a batch of writ petitions seeking the Court’s intervention to regulate hate speech.

"What are the provisions of law which relates to Hate Speech in India?", Justice Joseph asked when the hearing started.

This is the crux of the matter. Hate speech is not defined under any law, though there are specific provisions to check them.

In its report submitted to then I@B minister Ravishanker Prasad in March 2017, the Law Commission of India underlined the following legislation to deal with hate speech.

l               Section 153A IPC penalises ‘promotion of enmity between different groups on grounds of religion, race, place of birth, residence, language, etc., and doing acts prejudicial to maintenance of harmony’.

l               Section 295A IPC penalises ‘deliberate and malicious acts, intended to outrage religious feelings of any class by insulting its religion or religious beliefs’.

l               Section 505(1) and (2) IPC penalises publication or circulation of any statement, rumour or report causing public mischief and enmity, hatred or ill-will between classes.

(ii) the Representation of The People Act, 1951

l               Section 8 disqualifies a person from contesting an election if he is convicted of indulging in acts amounting to the illegitimate use of freedom of speech and expression.

l               Section 123(3A) and section 125 prohibit the promotion of enmity on grounds of religion, race, caste, community, or language in connection with an election

as a corrupt electoral practice and prohibits it.

l               Section 7 penalises incitement to, and encouragement of untouchability through words, either spoken or written or by signs or by visible representations or otherwise

l               Section 3(g) prohibits religious institution or its manager to allow the use of any premises belonging to, or under the control of, the institution for promoting or attempting to promote disharmony, feelings of enmity, hatred, ill-will between different religious, racial, language or regional groups or castes or communities.

l               Sections 5 and 6 of the Act prohibit transmission or re-transmission of a programme through cable network in contravention to the prescribed programme code or advertisement code. These codes have been defined in rules 6 and 7 respectively of the Cable Television Network Rules, 1994.

l               Section 144 empowers the District Magistrate, a Sub-divisional Magistrate or any other Executive Magistrate specially empowered by the State Government on this behalf to issue an order in urgent cases of nuisance or apprehended danger. The above offences are cognizable and thus have serious repercussions on the liberties of citizens and empower a police officer to arrest without orders from a magistrate and a warrant as in section 155 CrPC.

The commission suggested amendment to the Indian Penal Code, 1860 and the Code of Criminal Procedure, 1973 by adding new provisions on 'Prohibiting incitement to hatred' following section 153B IPC and 'Causing fear, alarm, or provocation of violence in certain cases' following section 505 IPC, and accordingly amending the First Schedule of the CrPC.

The commission in its report said that hate speech has always been a live debate in India and the issue has been raised time and again before the legislature, the court as well as the public. In Pravasi Bhalai Sangathan v. Union of India11, the Supreme Court dealt with a case where the petitioners prayed that the State should take peremptory action against makers of hate speech, the Commission said, and added, the Court did not go beyond the purview of existing laws to penalise hate speech as that would amount to ‘judicial overreach.

“The Court observed that the implementation of existing laws would solve the problem of hate speech to a great extent. The matter was referred to the Law Commission to examine if it ‘deems proper to define hate speech and make recommendations to the Parliament to strengthen the Election Commission to curb the menace of “hate speeches” irrespective of, whenever made,’ the commission said.

Justice Joseph suggested that the government should come forward to put in place an institution to check hate speech. The court also asked the Government to clarify whether it proposes to act on recommendations of the Law Commission of India regarding amendments to deal with hate crimes.

The Centre told the court that only 14 states have given their response to the Law commission’s recommendation. The Sc directed the remaining states to immediately file their replies and asked Senior Advocate Sanjay Hegde to collate the responses of the States.

Commenting on the role of the anchors in propagating hate speech, Justice Joseph said - "The role of the anchor is very important. Hate speech either takes place on mainstream television or it takes place in social media. Social Media is largely unregulated….As far as mainstream television channel is concerned, we still hold sway, there the role of the anchor is very critical because the moment you see somebody going into hate speech, it's the duty of the anchor to immediately see that he doesn't allow that person to say anything further. Unfortunately, many times somebody wants to say something he is muted, a person is not given proper time, he is not even treated courteously".

Justice Joseph went on to add: Freedom of expression of the press, we don't have it separately unlike the US….there should be free debate no doubt about it but, you should also know where to draw the line because there is a huge influence, particularly with the visual media….they produce a very serious effect on your brain. Freedom is for the listener. The freedom of speech is actually for the benefit of the listener. How would the listener ever make up his mind after listening to a debate where it is just a babble of voice, you cannot even make out what is happening.”

When Senior Advocate Sanjay Hegde stated that, "the industry is unregulated and there are no sanctions" one of the petitioners Ashwini Upadhyay countered, "Until hate speech is defined this will go on."

Asserting that hate speech poisons the very fabric, and can't be permitted, Justice Joseph said, "Political parties will come and go but the nation will endure the institution including press it is the important part, without an independent press no country can go forward, it is important that we have true freedom, there", Justice Joseph said.

" Stressing the need for a regulatory mechanism, Justice Joseph continued: "The problem is we don't have a regulatory mechanism for TV. I believe that all channels were fined heavily in England. We don't have that system here. Law means sanction, sanctions must be effected…the problem is that they are not being dealt with firmly. If sanctions are effected this will go… Any anchor will have his views, any anchor will not diverge from the view the channel is taking, they will all be intertwined, you can't divulge from it, but what is wrong is when you have people of different views you are calling them and you are not allowing them to express those views….in doing that you are bringing hate and your TRP is going up and you are driven by that and nobody is going to look into it and take care of it then it is very sad".

(The writer is Executive Editor, The Pioneer)