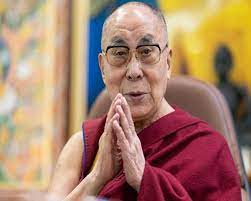 Tibetan spiritual leader Dalai Lama on Friday appealed to people across the globe to “collectively” take a stand against weapons of mass destruction.

Recalling the massive destruction wrought by atom bombs during the Second World War in Japan, the Dalai Lama said during his public discourse here that he had the opportunity to visit Hiroshima and see for himself the level of massive devastation there.

Two atomic bombs were detonated over the Japanese cities of Hiroshima and Nagasaki on 6 and 9 August 1945, respectively.

The Nobel Peace Prize winner was approached, at the Kalchakra maidan, before the commencement of discourses on the works of legendary Buddhist scholar Nagarjuna, by a group of devotees from Japan who offered him a torch of flame and sought his blessings.

Appealing to the people across the world to “collectively” take a stand against these weapons of mass destruction, the Dalai Lama said, “I could see, first hand, the massive destruction the bomb had caused….. Many countries in the world have developed nuclear weapons but at the same time there are people who are opposed to these”.

The Dalai Lama also expressed his concern about the COVID pandemic, recalling that it originated in “China but spread to India and other parts of the world”.

“The pandemic is quite serious. It gives anxiety to people. We offer our prayers so that it subsides”, said the Buddhist leader.