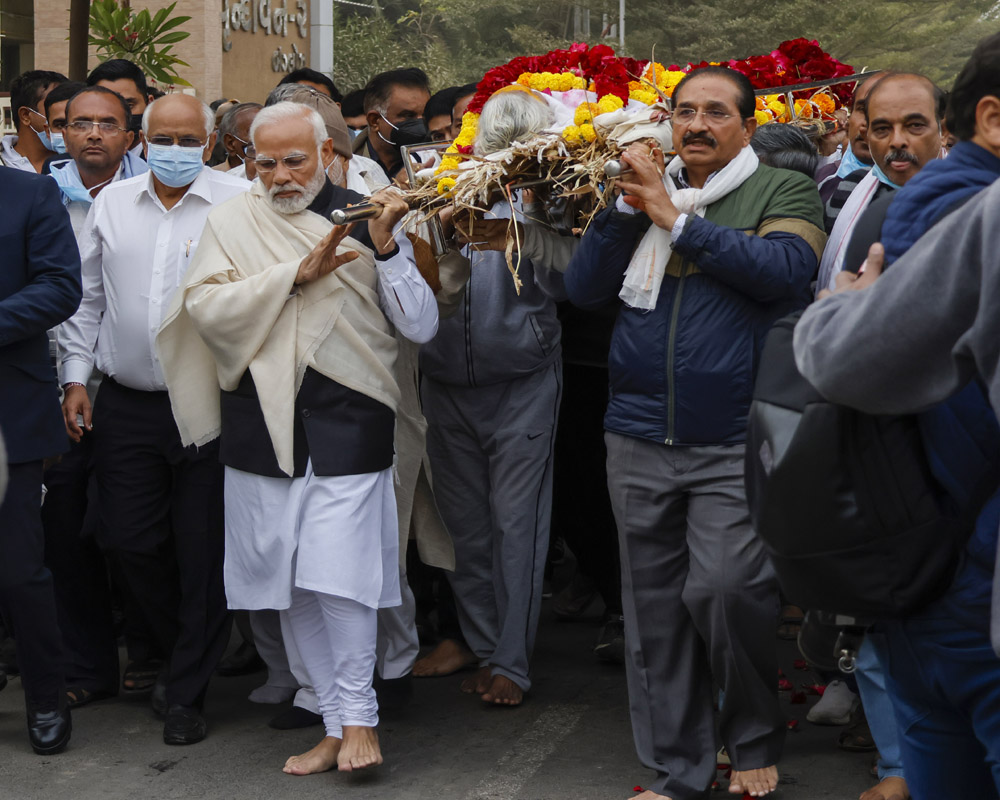 President Droupadi Murmu, Vice President Jagdeep Dhankhar and leaders cutting across the political spectrum on Friday condoled the death of Prime Minister Narendra Modi's mother Hiraben, recalling her simple and compassionate life that was an inspiration for all.

Hiraben, Hiraba to many, passed away at an Ahmedabad hospital on Friday at the age of 99, her death blurring political boundaries and uniting leaders of all hues in grieving with the prime minister.

Congress president Mallikarjun Kharge and party leader Rahul Gandhi, Tamil Nadu Chief Minister M K Stalin and West Bengal Chief Minister Mamata Banerjee were among the host of leaders from the ruling party and others who mourned the death.

"Prime Minister Shri Narendra Modi's mother Hiraba's hundred years of struggle is a symbol of Indian ideals. Shri Modi imbibed the spirit of '#Matradevobhav' and the values of Hiraba in his life. I pray for the peace of the holy soul. My condolences to the family!" the president said in a tweet in Hindi.

Lok Sabha Speaker Om Birla noted that a mother nourishes a person's life with values and said "Hiraben's virtuous life is an inspiration for all of us".

Expressing condolences, Union Home Minister Amit Shah said a mother is the first friend and teacher of a person's life and the pain of losing a mother is undoubtedly the biggest pain in the world.

"The struggles faced by Hira Ba to nurture the family are a role model for all. Her sacrificial ascetic life will always be in our memory. The entire nation stands with Prime Minister Modi and his family in this hour of grief. The prayers of crores of people are with you (Modi). Om Shanti," he said.

Defence Minister Rajnath Singh said a mother's demise creates a void that is impossible to fill.

"I am deeply pained by the passing away of Hira Ba, mother of Prime Minister Shri @narendramodi. The death of a mother leaves such a void in one's life that is impossible to fill. I express my condolences to the Prime Minister and his entire family in this hour of grief," Singh said in a tweet.

Paying tributes, Union Minister for Road Transport and Highways Nitin Gadkari said it was the values which Hiraben imparted to her family through a difficult life full of struggles that has given the country a leader like Modi.

Information and Broadcasting Minister Anurag Thakur said, "Losing a mother is one of the deepest sorrows. But her goodness, care, wisdom, and love will always be with you."

BJP president J P Nadda said her life will always serve as an inspiration. Her affection and commitment to truth gave the country a glorious leadership, he said.

Veteran BJP leader LK Advani recalled that the prime minister often spoke about the special bond that he shared with his mother, about her simplicity and her caring persona, and said, these will always be remembered and missed by all.

Paying respects to the prime minister's mother, the Rashtriya Swayamsevak Sangh said, "Mataji's life was a great example of a meaningful life of continuous work on the strength of devotion to values ??and unwavering faith in God even in extremely difficult circumstances".

Congress president Kharge and former party chief Rahul Gandhi said they were deeply saddened to hear about the demise of the prime minister's mother.

"... In this difficult time, I express my deepest condolences and affection to him and his family members," Gandhi said in a tweet in Hindi.

"Deeply saddened to hear about the demise of Smt. Heeraben Modi. My heartfelt condolences to Sri @narendramodi ji on the loss of his beloved mother. Our thoughts and prayers are with the entire family in this hour of grief," Kharge said on Twitter.

Congress general secretary Priyanka Gandhi and former finance minister P Chidambaram said the passing away of a mother is an irreparable loss.

"Your mother is also our mother," Mamata Banerjee told Modi at the Vande Bharat train launch he attended virtually.

Her Tamil Nadu counterpart Stalin also sent in his condolences.

"Dear Prime Minister @NarendraModi, We all know the emotional bond you had with your beloved mother Hiraba. The grief of losing one's mother is too hard to bear for anyone. I am deeply saddened and no words can describe how sorry I am for your loss."

Bahujan Samaj Party supremo Mayawati and Samajwadi Party president Akhilesh Yadav were among other leaders of Uttar Pradesh who condoled the loss.