Emergence of a leader in slumbering Cong

Emergence of a leader in slumbering Cong 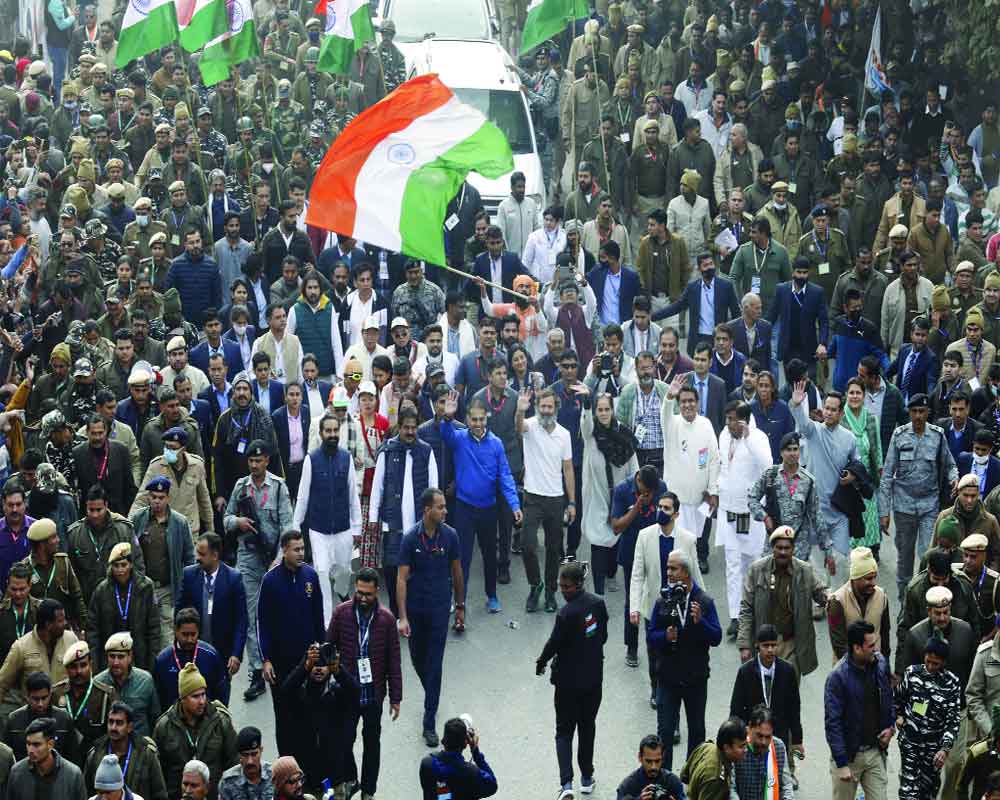 From earning the disparaging epithet ‘Puppu’ — coined by the BJP and secretly peddled by some within the Congress — to proving his mettle as a leader to reckon with,

Rahul Gandhi has traversed a wide spectrum of political path. While the Bharat Jodo Yatra has launched him in a new avatar, keeping up the tempo and transforming the march of the multitude into electoral dividends is an acid test of his calibre as we don’t know how long this historical window will remain open

“Great men are not born great, they grow great”

Amid massive public support for Rahul Gandhi’s Bharat Jodo Yatra, the Congress on January 6 sprung two surprises for the political observers — 17 leaders from Ghulam Nabi Azad’s party in Jammu & Kashmir returned to the Grand Old Party; and the Congress allegedly entered into a tacit understanding with its arch-rival BJP in the mayoral election in Delhi to weaken the AAP, which has snatched its vote bank in the national Capital. While ghar vapsi by the leaders of the Azad’s party is an indication of the Congress’ organisational building under Rahul’s de facto leadership, his tapsya — a term in Hinduism Rahul employs for his Bharat Jodo Yatra — has shattered the tarnished image of him and his party whose prospect of electoral revival was written off. That Rahul has shed the perception that he is not cut out for the rough and tumble of politics, and that the Congress is waking up after a long slumber are now understood even by the BJP.

For the BJP and non-UPA parties, Rahul has been a convenient lightning rod for voters’ discontent with the direction-less Congress in the past nine years, but with his spectacular march and structured dialogue with the civil society, he has survived epithet “Puppu” — coined by the BJP and secretly peddled by some within the Congress — to prove his mettle as a leader to reckon with. The last eight years have seen the emergence of new leader in Rahul as he has traversed a wide spectrum of political path since May 2014 poll drubbing which plunged the Congress to just 44 seats in the Lok Sabha, and William Dalrymple had described Rahul as “tongue tied and uncharismatic on campaign, conceited and slow witted in private; in short, the complete electoral prophylactic”.

Since then, the former Congress chief has learnt many lessons. Besides building his public image, he is honing his leadership skills to steer a national party to regain its glory. His skill in striking a balance between the old guard Ashok Gehlot and the Young Turk Sachin Pilot spared the Congress blushes it had encountered by mismanaging the Jyotiraditya Scindia affair in Madhya Pradesh.  It is another matter that the Rajasthan fire has yet not been put out completely. Nevertheless, his strategy of balance is likely to scuttle the chances of spawning of G23 like groups, and thus bring more cohesion in the weak organisational structure of the Congress.

The yatra has further consolidated his position as the de facto leader of the Congress under whose stewardship the party can make strategy to take on the mighty BJP, which hurriedly launched “Jan Sankalp Yatra” in poll-bound Karnataka to undo the damage it incurred from Rahul’s march. The way Rahul has manoeuvered the Bharat Jodo Yatra from Kanyakumari to UP till now, it seems he is not targeting the bullseye of electoral dividends at the moment.

An analysis of his political conduct produces, to my mind, a fixed trajectory of targets. The first being to bring an order in the organisational set-up in the Congress. Second, avoiding direct attack on Prime Minister Narendra Modi as the 2014 experience for the Congress is bitter. Sonia Gandhi’s “maut ka saudagar” slur on Modi had boomeranged and helped him capitalise on the barb, giving impetus to the BJP’s poll prospects. Instead, he has taken a leaf from Modi’s book: No rest or post-poll holidays.

Third, Rahul has tweaked his tactics on the “secular” politics of the Congress. He has espoused soft Hindutva. During the yatra, Rahul has not missed hopping to temples. In the national Capital also, he resumed his second phase of the yatra from Hanuman temple. However, this soft Hindutva of Rahul is not going to cost him Muslim votes as their vote is certain for a formidable political force which can stop the BJP’s juggernaut in 2024.

Fourth, on the emotional front and connecting with the masses also, Rahul has not lost any opportunity. Although the public display of affection is considered scheming, with a sole aim to buffing one’s reputation, his locking of hands with those of co-marchers, irrespective of their gender, kissing sister Priyanka Gandhi Vadra, and hugging mother Sonia Gandhi in public, have looked spontaneous, producing the desired high impact.

For a fact, political yatras have been turning points in history if they tried and achieved consciousness about a subject that affects the masses. From the historic Dandi March by Mahatma Gandhi and Mao Zedong’s Long March, to LK Advani’s Rath Yatra, all achieved their targeted aims as those were able to develop a heightened political consciousness.

While the Bharat Jodo Yatra has certainly launched Rahul in a new avatar in the political map of India, keeping up the tempo and transforming the march of the multitude into electoral dividends is an acid test of his calibre as we don’t know how long this historical window will remain open.

(The writer is Associate editor & News Editor, The Pioneer)