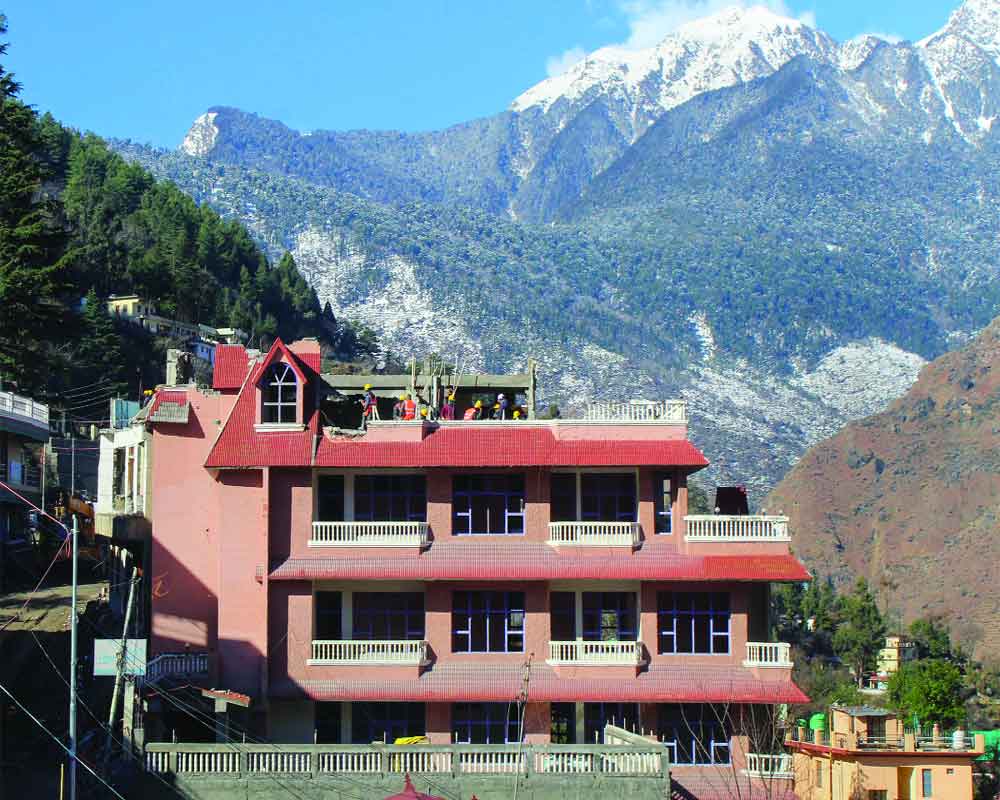 The Joshimath disaster portends that the Himalayan environment may not be able to withstand another push from intrusive anthropogenic activities like massive construction projects of townships, highways, tunnels, railway tracks, and dams

In this globalised era, along with the changing needs, humans’ greed and untrammelled use of resources have a debilitating impact on nature.

And the case in point is Joshimath, which is sinking. There are lessons to be learnt for the government as well as humans on how to save national treasure troves before they become history.

Joshimath, a historical place dating back to ages with importance in the Hindu religion, is facing an unprecedented survival battle; residents living there for years are being shifted to safer places as cracked buildings are being dismantled.

Though the exact reasons for subsidence of Joshimath, also known as Jyotirmath — a city and a municipal board in Chamoli District in Uttarakhand and a gateway to several Himalayan mountain climbing expeditions, trekking trails and pilgrim centres like Badrinath — are yet to be established, some experts pointed a finger towards untrammelled construction with hotels coming up for tourists/pilgrims causing disbalance to the mountainous region.

Local communities have been giving voice to their opposition to the building of a massive infrastructure project known as the Char Dham road project, which is currently under construction.

The structure of this road is inherently unscientific, which may have devastating effects on the ecosystem of the mountains.

It has been noted that the Tapovan-Vishnugad hydro project tunnel, which is situated on an old glacial deposit and passes just below Joshimath — located at a height of 6,150 feet — could be a factor

that is contributing to the current disaster.

The unregulated rise in tourism led to a construction boom in dangerous areas like river valleys, floodplains, and slopes prone to landslides, which intensified the disaster.

Subsurface structures destroyed the environment. In long-distance tunnels, traffic exhaust pollution in a micro-environment with no sunlight and limited dispersion causes groundwater levels to drop irreversibly.

Since the Himalayan States lack large, contiguous aquifers, groundwater use differs from that in the plains.

Aquifer compaction and ground settling must have resulted from sediment pore-pressure depletion. The mountain slope is unstable due to train vibrations and can slide anytime. Landslides have doubled since highways and railways were built.

The Himalayas’ natural resources — forest, water, biodiversity, and ecotourism — should have a development strategy that protects the environment.

Traditional knowledge, agriculture, construction, and culture should be used for human well-being. Due to steep gradients, climate and biodiversity are dynamically heterogeneous in the Uttarakhand Himalayas.

Recent disasters, exacerbated by unsustainable human interference in natural systems, demonstrate this. Therefore, sustainable, not mass, tourism is needed in the Himalayas.

The Joshimath episode warns that the Himalayan environment is at a tipping point and may not be able to withstand another push from intrusive anthropogenic activities like massive construction projects of townships, highways, tunnels, railway tracks, and dams - an ecosystem already struggling with global warming - and that devotees must lead the charge to save the “Abode of the Gods”.

Many things can also cause subsidence, but some of the most common are earthquakes, soil erosion, and soil compaction.

Joshimath is located in Zone V of the Seismic Zonation Map in the Chamoli district. This region has experienced several earthquakes with a magnitude lower than 5 on the Richter scale. As a result, the town of Joshimath is perilously close to the tectonic fault line known as the Vaikrita Thrust (VT).

Additionally, the town is located near two of the most important geological fault lines: the Main Central Thrust (MCT) and the Pandukeshwar Thrust (PT). The Main Central Traverse (MCT) passes below Helang, located a little south of Joshimath Town, and juxtaposes with the rocks of the Garhwal Group (Joshimath Formation).

This places the town within the impact zone of any tectonic activity on the MCT.

According to Uttarakhand State Disaster Management Authority (USDMA) study, the town is prone to landslides, and the first subsidence was reported in the 1976 Mishra Commission report. Landslides are common due to perennial streams, upper-elevation snow, and highly weathered gneissic rocks with low cohesiveness.

(The writer is an Assistant Professor in the University of Delhi. Views are personal)