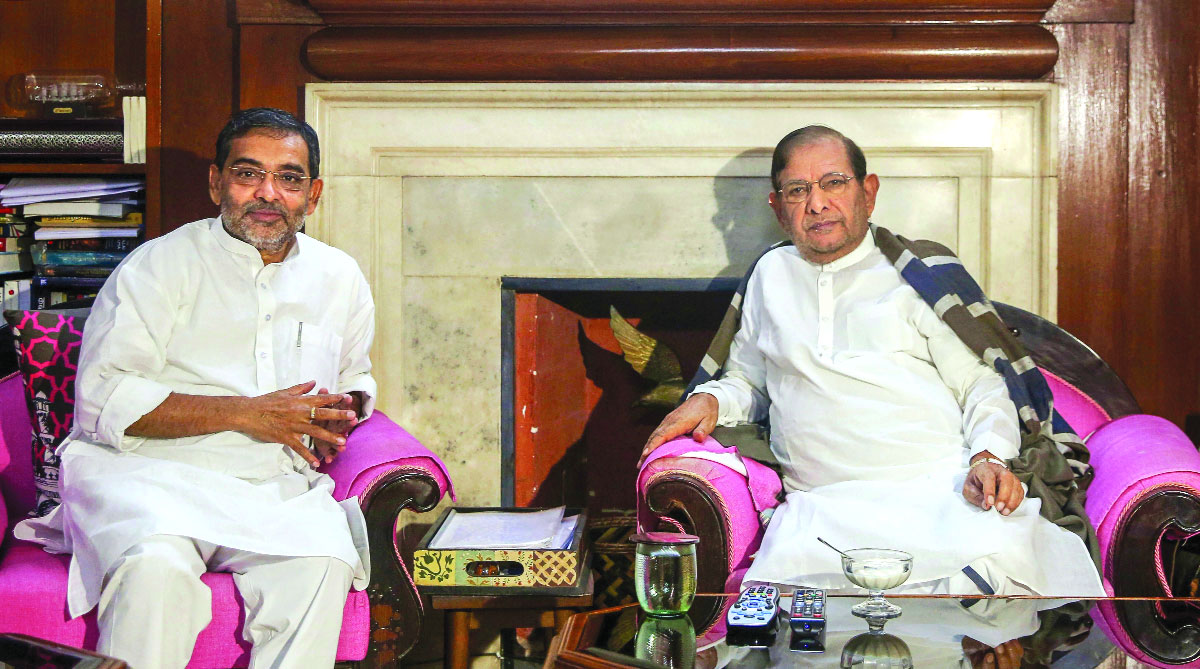 Kushwaha met Sharad at the latter’s residence and both the leaders were believed to have discussed the current political situation, especially in Bihar, RLSP sources said.  In a tweet, Kushwaha described the meeting as a courtesy call.

Seat-sharing within the National Democratic Alliance (NDA) constituents is not a settled matter even as BJP president Amit Shah last month announced here with Nitish by his side that his party and the JD(U) would contest equal number of Lok Sabha seats with other NDA constituents like RLSP and Lok Jan Shakti Party (LJP) of Ram Vilas Paswan need to adjust with lower number of seats than they contested in 2014.  The RLSP, which had fought three seats in 2014 and won all, is unlikely to be spared not more than two seats by the BJP.

Kushwaha has maintained  he is ready to “sacrifice” for the NDA and would like Prime Minister Narendra Modi to return to power at the Centre, but wondered as to why he was being kept out of the Nitish Kumar-led JD(U)-BJP coalition in Bihar.

The OBC leader, who is also a Union Minister, has once famously said “Nitish is capable of sinking any boat he rides on.’’ He accused Nitish of conspiring to break the RLSP.

Kushwaha had also attacked Nitish for allegedly insulting him and had targeted him again on Sunday over reports that two MLAs of his party may join the JD(U).

The RLSP leader has kept the seat-sharing pot boiling by meeting rival Lalu Prasad’s son Tejashwi with reports that he had sought six Lok Sabha seats but was “assured” only four. But Kushwaha described his meeting with Lalu’s son at a Government guest house as a “chance meeting”.

Sharad Yadav had snapped his ties with Kumar after the JD(U) chief joined hands with the BJP last year and currently working to rally the Opposition against the BJP-led NDA. Sharad recently also met with Andhra Pradesh Chief Minister Chandrababu Naidu who has also been working with opposition leaders including Congress president to forge a national alliance against the NDA.

RLSP and LJP leaders and State presidents have insisted that both the parties have not agreed to the reduction of their LS seat share and would contest the same number of seats which were allocated to them in 2014.

An old rival of Kumar, Kushwaha had also attacked the Chief Minister for allegedly insulting him and had targeted him again on Sunday over reports that two MLAs of his party may join the JD(U).

He had said he would apprise Shah of the “humiliation” he had suffered at the hands of Kumar and also request him to clear the confusion over seat-sharing among the NDA constituents in the State at the earliest.

Kushwahas have good 10 to 12 per cent vote share and are considered the second-most dominant caste in the OBC category after Yadavs (15%) in Bihar.