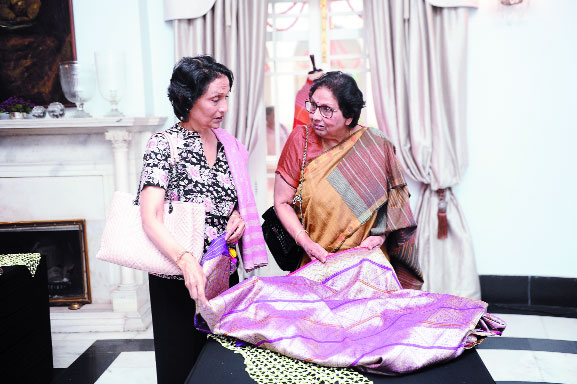 To celebrate this ancienct heritage of textiles between India and Turkey, the handloom revitalist, Smriti Morarka, showcased her Banarsi saree collection at an interactive exhibition at the residence of the Ambassador of Turkey to India. By Ankita Saxena

The ancient civilisations of both Turkey and India have a similar passion for the woven textile. The exuberant use of metallic thread embedded in the softest silk, the great care given to stylised motifs and precision weaving were their shared hallmark and imagery and iconography transcended geographical borders, including the Buddhist influences, reflecting in the Ottomon textiles.

The exhibition aimed to introduce the audience to the Banarasi process of weaving, the hands that work the looms and the mind that plans the context of the textile. In an unusual gesture, female members of the weavers’ families were also  present, and endorsed their age-old artistic excellence. The exhibition also showcsed a threeminute trailer to a documentary film titled—‘Bunkar–The Last of the Varanasi Weavers’, that premiered in the Indian Panorama at IFFI this year.

Morarka and her team of weavers staged live looms as master weavers showcased their skills. As live classical musicians played tunes to export the audience to the land of Ghats, there were small salons where the original weavers from Varanasi along with a woman member of their family were spotted casually interacting with each other. The women were dressed in TANTUVI Sarees by Smriti Morarka.

“Being able to showcase the very best from the looms of Banaras to the discerning patrons in Delhi is always a privilege. This time it was even more special as we were able bring to the fore the hands behind the looms that work tirelessly to create these magnificent works of art,” said Morarka.

While on one hand, there was a setup of a Banarasi shop to exhibit sarees, on the other hand, a fashion consultant from Mumbai tutored the audience about modern, interesting ways of draping a Banarsi by demonstrating the same on the contemporary Indian models. What made this exhibition even more special was the array of Banarsi delicacies, specially curated for the evening. Delhi’s prominent citizens including spouses of Ambassadors of various nations to India, historians, fashion designers, blue-chip entrepreneurs, socialites, art curators, textile connoisseurs and patrons were spotted enjoying this authentic experince.

Sharing details about the brand, Morarka informed that she started TANTUVI, which means ‘weaver’ in Sanskrit, in 1998 as an attempt to revive the dying weaving traditions of Varanasi. She said, “The original famed techniques of weave were no longer in use since the weavers found them economically unfeasible. TANTUVI worked closely with them to move from disclosing these techniques used by their ancestors to then actually producing pieces made in these ways. The challenges were to make the designing sensibilities one that would appeal to the new and still toe the line with the traditional, as well as the cost of using these laborious techniques. It is my endeavor at TANTUVI, to bring before my buyers the very best, using classic and timeless patterns and motifs along with due thought given to the fabric, texture and quality.”

The fabrics made under the label of TANTUVI are made in natural yarns of cotton and silk, its derivatives or in the combination of both.  Providing support to the local real zari industry, all the zari used by the organisation is pure. The primary pitch of TANTUVI is sarees produced with patience, skill and dedication. “By making the sarees in limited numbers, we do our bit to ensure its exclusivity. By not falling into the rhythm of mass production and commercialisation, we commit to ensure that the unique charm of each of our designs is sustained,” added Morarka.