From a woman's eyes

From a woman's eyes 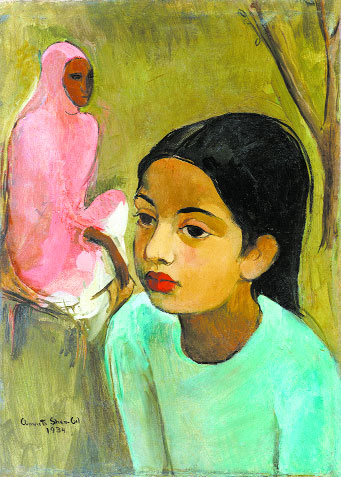 Epoch-defining artist Amrita Sher-Gil's The Little Girl in Blue will be auctioned by Sotheby's Mumbai for the first time. By Team Viva

When Amrita Sher-Gil died in 1941, her life was like an unfinished song, like a riven lute. We shall not see the like of her again,’ Charles Fabri, the original owner of The Little Girl in Blue, who is believed to have become the artist’s lover, had said about her. And now, this exquisite painting will be offered for sale at Sotheby’s in Mumbai in an extremely rare appearance of the artist’s work at auction.

Painted in India in December 1934, when the artist was just 21, The Little Girl in Blue is believed to depict Babit, the artist’s second cousin and the granddaughter of the eminent politician Sunder Singh. This is only the third oil painting by Sher-Gil to come to auction in India, and the seventh offered anywhere in the world. The painting has been in the same family collection ever since it was acquired at the artist’s first solo show in 1937 by Fabri, an eminent art critic.

This painting and its companion works were unveiled in November 1937 at Faletti’s Hotel in Lahore. The landmark exhibition had changed the perception of Indian audiences towards contemporary art.

Embodying a bohemian combination of East and West, Sher-Gil’s work belonged to no particular school or style of painting. She forged a revolutionary new path informed by her experiences in Hungary, Paris and India, creating a body of work that was simultaneously aggressively modern and decidedly Indian.

“There exist few, if any comparisons in the history of art to Amrita Sher-Gil. The influence she wielded in her tragically short life was enormous. With her avant-garde approach, not only in her technique and style, but in her presentation of female subjects, she shaped the future art of in India perhaps more than any other artist of the time. It is fantastically rare find to her paintings at auction, especially ones of such significance as The Little Girl in Blue,” said Yamini Mehta, international head of modern and contemporary South Asian art at Sotheby’s

At a time when most artists portrayed women as content and compliant, Sher-Gil’s treatment of female subjects was singularly unique, revealing their loneliness or silent resolve. This was perhaps a reflection of her own isolation in a life caught between different worlds. Nonetheless, she came to be seen an arbiter of style in India, a symbol of the glamour of the inter-war years. When the elites of Lahore arrived to view her exhibition in 1937 they are said to have come to see Sher-Gil and her art.

The painting will be placed on public display for the first time since Sher-Gil selected the painting for her inaugural show. The auction record for the artist was set at Sotheby’s New York in 2015 when Sher-Gil’s self-portrait from 1933 made $2.9 million.

Like Sher-Gil, Fabri was born in Budapest. A Hungarian Indologist, he was invited by Rabindranath Tagore to teach art history at Santiniketan in 1933, and later joined the Archaeological Survey of India, working in Delhi, Lahore and Mohenjodaro.

Sher-Gil and Fabri first met at the Faletti’s Hotel exhibition, which Fabri described as a “veritable feast for the eyes” in his review for Lahore’s Civil and Military Gazette. The pair went on to forge a close relationship, with Fabri providing Sher-Gil with crucial emotional and critical support in Lahore. Indeed, her husband Victor is said to have believed the two were lovers.

In 1947, six years after her death, Fabri wrote the novel Indian Flamingo dedicated to “the beloved, undying memory of Amrita and her sisters and brothers of the New India”. The novel is the story of the love between John Fawcett curator of the Lahore Museum and Padma a young artist who is in the prime of her youth. Fabri had himself become the curator of the Lahore Museum after the end of the Second World War.

(The painting will be on view at Bikaner House, Pandara Road, New Delhi on Saturday November 17, 2018, open until noon.)