Threaded to the Father

Threaded to the Father 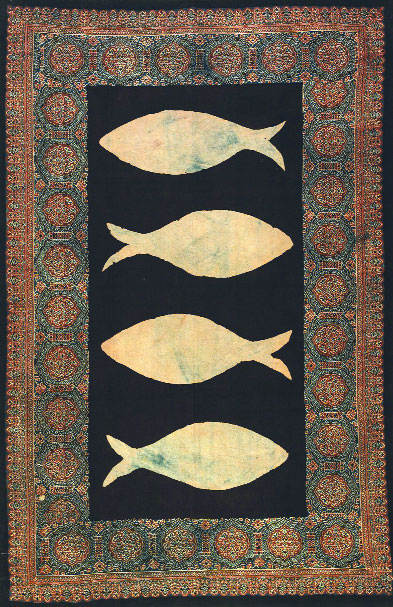 Artist Shelly Jyoti talks to Asmita Sarkar about the ideas of Swaraj and Swadharma, which she explores through her textile-based works

Delhi-based fashion designer Shelly Jyoti has taken Mahatma Gandhi’s teachings of Swaraj to heart. Through her art, which she expresses on textiles, she is perpetuating the lessons that are mostly lost in today’s urban chaos.

She calls herself a researcher of Bapu’s ideologies and through her current exhibition, Revisiting Gandhi: The Art of Shelly Jyoti (2009-18), she is exploring the will of the collective, for which she uses the fish motif.

It is an intro/retrospective that resurrects Bapu’s timeless philosophy of swaraj and swadharma in textile-based artworks. The exhibition is inspired by the anti-imperialist text Hind Swaraj written in 1909. Jyoti examines elements of Gandhi’s critique of modern civilisation, noting his emphasis on an evolved ethical and spiritual self for creating an alternative perspective of a better world.

“I am trying to draw the history and narrate the story of swaraj from the present perspective. If I needed to make a garment I would do it. In the exhibition, Khadi March, I made jackets and angrakhas as installations to show that if the 30 crore urban population sought even five metres of khadi, the demand it would create is unimaginable,” she said. “In this exhibition, it was important to show the idea of swadharma in our country and the collective impact. So, I used the fish motif because when they move together there is turbulence in the water and together, they make a collective impact. When you walk into the gallery, you feel that you have entered an aquarium. I made ajrakh fishes on textiles for that,” she said and added, “We need to understand the idea of self-duty.”

The researcher thinks that popular representations of Gandhi like the Munnabhai series of films are good to keep his lessons alive for the audience. Her inspiration runs deep. Right from 2009, she explored the importance of indigo, then the Dandi march and khadi.

Gandhi had said that the book Hind Swaraj is both — written by me and not written by me. He was drawing from the Upanishads, Bhagwat Gita and the Vedas about how to conduct one’s life. “The religious texts are an integral part of an Indian family. We all know about self-control, self-duty and respecting our elders. Gandhi reinforced what was the conduct of life and got the masses to understand. This led to moral regeneration,” she said.

For her, the duties towards our families are not enough. One has to also look at the duties towards the nation. “When we ask children what they do on August 15 and January 26, they say nothing, it’s a holiday. Gandhi had a quote that instead of giving three paisas to weavers give them three annas. It would give swaraj to the spinners and weavers. As swadharma to the country, we can buy at least 5m khadi, handpsun and hand-woven. Buy it with the idea of doing something for your country alone,” she added.

In one of her artworks, she used 30 metres of hand-spun and hand-woven khadi material seeped with the residual colours of ajrakh printing, and titled Residue, Reflections, Reproductions. “I placed lengths of fabric under each sheet before block printing the material laid out on the studio tables. The marks on the sheets are the outcome of the process of many prior works in progress, residue from the left-over dyes. I hope to convey through this piece that the last decade of my life has been a period of intense study on Gandhi as well as one of finding my own self, my own dilemmas, introspections, self-transformation and of reading Vedic literature to connect to Gandhi and the endless ocean. I feel through this process I’m coming closer to comprehending and understanding my life and artistic journey,” she said.

Revisiting Gandhi: The Art of Shelly Jyoti (2009-18) will be on display at the Indira Gandhi National Centre for Arts (IGNCA) from October 6.