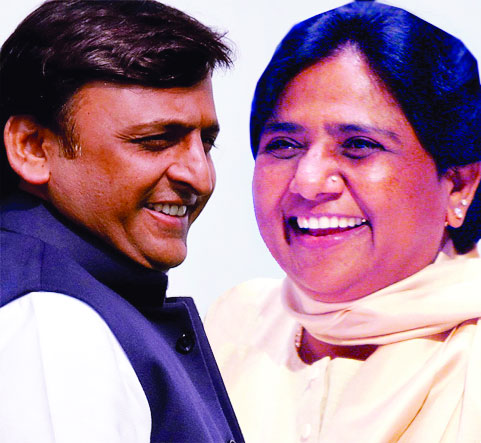 For both Akhilesh Yadav and Mayawati, it pays to keep the Congress out of a formal alliance

While the mahagatbandhan talks take place over lunch and dinner meetings in an election season, the Samajwadi Party (SP) and the Bahujan Samaj Party (BSP) have frozen their mutual alliance in Uttar Pradesh over a tub of ice-cream and are determined not to share it with the Congress or let anybody else melt it with their warmth or anger (SP chief Akhilesh Yadav has already called out the BJP over the CBI case against him in a sand mining case as political vengeance). Superficially, it might appear that the SP and the BSP have been somewhat miffed at being cold shouldered post the Assembly victories of the Congress in the three States of Rajasthan, Madhya Pradesh and Chhattisgarh. While the SP is sulking that its lone MLA had not been accommodated in the Madhya Pradesh Cabinet, BSP chief Mayawati made her ire public saying the Congress should not take its support for granted in the same State if cases against some Dalit protesters were not withdrawn. Chief Minister Kamal Nath promptly took care of her wishes. But the fact of the matter remains that politically both the regional parties would have a greater bargaining chip sans the Congress. Akhilesh particularly learnt this the hard way during the last Assembly election, which cost him the chief ministership despite speeding up on the performance index in the last two years of his tenure. That was because a pre-poll alliance and mutual accommodation ensured SP did not have a full play of the seats. And the Congress vote share wasn’t transferred to it either. In fact, it flitted away to other parties, so insignificant it is in Uttar Pradesh.

Even today the Congress’ vote share in India’s barometer State is in dismal single figures. Nor is it loyal enough to now migrate to caste-based parties. In fact, it has gone to the BJP. Even the Muslim votes are not with it anymore. And if the Phulpur bypoll was the litmus test, then both SP and the BSP realised that their committed votebases could work to each other’s advantage in alliance and getting the arithmetic right. The Congress, with its minuscule presence, would prove to be a dead weight than an asset. So it works for both SP and BSP, given their solid vote percentages, to pose a threat to the BJP’s vote share in combination and even surpass it for the Lok Sabha. If the alliance does succeed in gaining a major share of the Lok Sabha seats in Uttar Pradesh, it will clearly have a greater say in the formation of the new Government, whatever that might be, and may have an opportunity to claim its relevance at the State level. Besides, Akhilesh may have lost the chief ministership but is still reaping the dividend of an image change he has effected over the years, emerging out of his father’s shadow and politics of opportunism to posit himself as a dynamic, young and doer leader. He certainly doesn’t want to dilute this or get swamped by associating himself with Congress chief Rahul Gandhi. It works for both the SP and BSP that the Congress stay in the fray as a vote-cutter of the BJP and helps justify the backward caste-Dalit coalition, something which is otherwise considered a marriage doomed from the start, as a front against the upper caste, Thakur raj of Yogi Adityanath. This anti-oppression stance might just work.