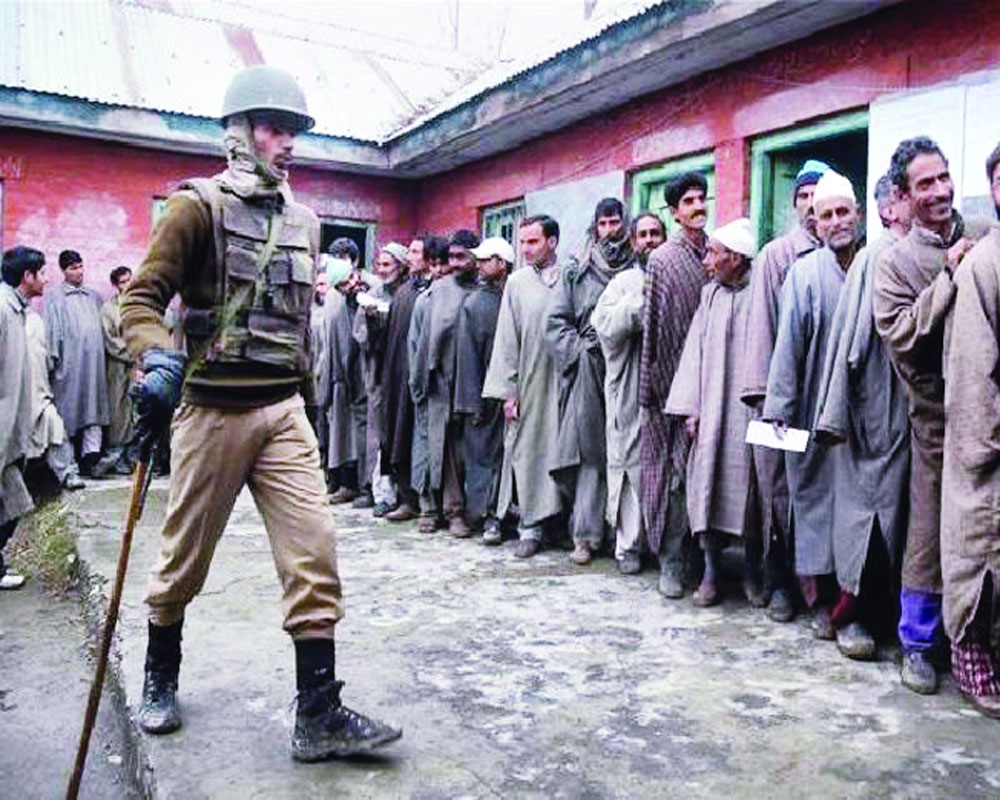 In no other State has ‘political reservation’ of seats taken place as in J&K. Governor Malik must use legislative powers to set up a commission and fix glaring anomalies

The recent euphoria over a fresh delimitation exercise to restructure the lopsided constituencies in Jammu & Kashmir quickly dissipated as the Centre denied media reports that Home Minister Amit Shah is considering such a move. Since then, Governor Satya Pal Malik has earned the public ire for asserting that the Government has no intention of scrapping Articles 370 and 35-A; his recommendation that the time is ripe for talks with separatist Hurriyat leaders has further inflamed some passions. Perhaps these are straws in the wind that suggest some changes are in the offing.

In a little-noted development, on June 16, the Bharatiya Janata Party’s (BJP) Jammu & Kashmir unit passed a resolution seeking fresh delimitation of Assembly constituencies and de-freezing of at least eight of the 24 seats reserved for Pakistan-occupied territories. It lamented the “gross injustice done to Ladakh and Jammu regions” by previous National Conference (NC) Governments that gave undue weightage to the Kashmir valley and proposed that the eight seats be allotted to the Jammu region, for families that fled Pakistan-occupied Jammu & Kashmir (PoJK) in 1947-48, currently estimated at 12-13 lakh.

It bears stating that the BJP has tried to ensure Indian citizenship to Hindus fleeing religious persecution in Pakistan. Under the first Modi Government, refugees settled in Rajasthan were granted citizenship and the trend continues. On World Refugees Day (June 20), 19 Pakistani migrants in the border district of Barmer received citizenship and another 10 people in Pali and five in Jalore were promised citizenship. Reports suggest that there are thousands of Pakistani Hindus in Rajasthan who are likely to receive citizenship soon. It is difficult to believe that the Centre will indefinitely ignore the plight of West Pakistan refugees in Jammu & Kashmir.

The BJP State unit also urged political reservation for Scheduled Tribes (Gujjars, Bakarwals, Gaddis and Sippis), who were given Schedule Tribe (ST) status in 1991, but denied reserved seats. Further, it objected to the law requiring Kashmiri Pandit migrants to fill the “M Form” for voting in the Valley.

The regional angst over Kashmiri domination over the State is valid. After Maharaja Hari Singh’s accession to India, the Constituent Assembly was set up but Sheikh Abdullah used the political weightage gifted to him by former Prime Minister Jawaharlal Nehru to unilaterally declare the delimitation: Kashmir (43), Jammu (30) and Ladakh (2). This became the entrenched orthodoxy that was later only tinkered with: Kashmir (46), Jammu (37) and Ladakh (4). Abdullah reserved 25 seats for the occupied regions, which was subsequently reduced to 24.

When the delimitation controversy broke out on June 4, former Chief Minister Omar Abdullah, in a number of tweets, offered the “legal position” on delimitation in Jammu & Kashmir. The freeze, he claimed, was implemented only to bring the State at par with the rest of the country after the Constitution (84th Amendment) Act 2001 froze delimitation throughout India, until the first census is taken after the year 2026. The truth is a little more complex.

During Emergency, the Congress moved the Constitution (42nd Amendment) Act 1976, to freeze fresh delimitation after Census 2001, on the plea that changing the number of seats according to population punished States that had controlled their population growth. This protected the number of seats of southern States like Tamil Nadu, Kerala and Karnataka in the Lok Sabha and was generally viewed as fair by the rest of the country. In 1977, the Congress fared well in precisely these States.

A quarter century later, the Constitution (84th Amendment) Act 2001, postponed delimitation and prevented reallocation of seats to the States to reflect their growing population until the Census after 2026, ie, Census 2031. However, the 84th amendment permitted redrawing of boundaries of constituencies within the States to mitigate large differences and enable constituencies of more or less equal population strength.

The problem in Jammu & Kashmir begins with the arbitrary and partisan allocation of seats on provincial basis by Sheikh Abdullah, long before the fig-leaf of Article 370 bestowed a special political protection to the actions of the State leadership. In no other Indian State has this kind of “political reservation” of seats taken place to preserve the ethno-religious supremacy of one group.

Consider the recently divided Andhra Pradesh — there was no en bloc reservation of seats for any district or division before or after the separation of Telangana. Previously, the Atal Bihari Vajpayee Government divided the States of Madhya Pradesh, Bihar and Uttar Pradesh and here, too, there was never any rigid and arbitrary allotment of seats to any region. Take Maharashtra, where demand for a separate Vidarbha has been simmering for decades — there is no fixed allocation of seats for the region.

This astonishing development is exclusive to Jammu & Kashmir and gave the Muslim-dominated Valley undue power over the State. Strangely, Jammu activists, who rail against Kashmiri domination, have never fought to do away with this artificial division and to treat the entire State as a single unit, with delimitation on the basis of population. Instead, they have validated this artifice by demanding trifurcation (and sometimes quadrification) of the State along these lines — a cause that does not find much resonance in the rest of the country. Many citizens feel that once Article 370 is removed, many sources of discrimination will simply vanish.

It seems doable to use the leeway granted by the 84th Amendment Act to redraw the constituencies within Jammu & Kashmir afresh, without a predetermined weightage to any province, giving due regard to population on the basis of Census 2011. As the last delimitation of Jammu & Kashmir was in 1995, it would be an abominable injustice to wait 60 years till Census 2031 for a fresh delimitation.

It is also unconscionable to continue to deny reservations to the STs. Moreover, the seven Schedule Caste seats have been stagnant in Jammu Pradesh since 1996, viz, Chhamb, Domana, RS Pura (Jammu district); Samba, Hiranagar (Kathua district); Chenani (Udhampur district) and Ramban. There is no merit in freezing this rotation until 2031 and denying the SC population in other constituencies (in both Jammu & Kashmir provinces) of representation in the Assembly. Nor is this system followed in any other State. Under President’s rule, the Governor enjoys all legislative authority and can set up a delimitation commission to fix these glaring anomalies.