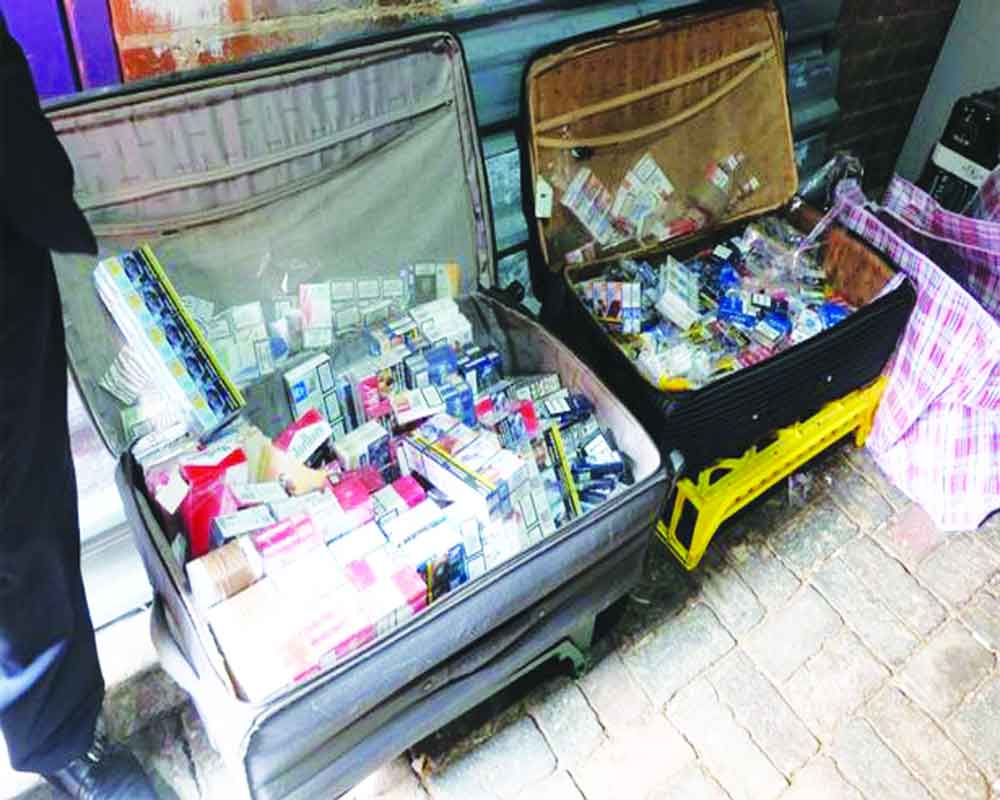 India’s economy lost Rs 1,17,253 crore in FY 2018 due to smuggling. All stakeholders must work on an effective deterrence to avoid leakage

The Indian economy lost Rs 1,17,253 crore in  2018 due to smuggling in five key sectors and about 16.36 lakh worth of livelihood opportunity. These figures, cited by a FICCI (Federation of Indian Chambers of Commerce and Industry) study, are alarming given that the global economy is suffering and India’s fiscal health is also not robust. The Indian economy gained momentum in 1991 with the three-pronged steps of liberalisation, privatisation and globalisation taken by the then Narasimha Rao Government. Though passing through ups and downs, since then, in general, the economy has been doing much better than before.

However, at this moment, the scenario is not encouraging, not entirely due to domestic factors.  Many manufacturing sectors like automobiles, textiles, Micro, Small and Medium Enterprises (MSMEs) are not doing well, which besides other consequences for the country have resulted in creation of fewer jobs.

Besides all these factors, another element which has had a huge negative effect on the economy is the fast-growing high volume of illicit trade. Smuggling and counterfeiting are normally seen only from the prism of the loss of revenue to the exchequer. However, it has many more facets that impact our economy, society, law and order and employment generation.

Over the years, the rate of growth of illicit trade has outpaced the growth of the economy. It has credibly been estimated that by 2022, the market size of illegal business at the global level will touch $3 trillion. No country is immune to this problem and there is no product, the counterfeit of which is not available in the market.

According to a report by the United States Trade Representative (USTR), pharmaceuticals and Fast Moving Consumer Goods (FMCGs) are facing a big problem due to the illicit market as 20 per cent of pharmaceuticals sold are either counterfeit or sub-standard and in the case of FMCG products, seven to nine per cent of the market share has been taken away by smuggled or counterfeit goods, which result in an annual loss of Rs 21,000-Rs 31,000 crore to the industry.

One alarming aspect of the illegal business is that money generated through this is the main source of financing terrorism across the globe. Different terrorist organisations indulge in smuggling and counterfeiting of specified products. While the Islamic State deals in cigarettes, petroleum, oil and lubricants and mobile phones, the Hezbollah trades in drugs and medicines, the Al Qaeda in clothing and bags, the Irish Republican Army in pirated discs and clothing, the Hamas in drugs and food products and the Boko Haram in cigarettes. Illicit trade in tobacco products is considered a low-risk, high-reward economic activity and this evil business is termed as the crime of the 21st Century by the US security service the Federal Bureau of Investigation. The online sale of counterfeit goods is also burning a major hole in the economy, of the world and India, as nearly one in three Indians reported receiving counterfeit products online. An Organisation for Economic Co-operation and Development (OECD) report of March 2019 shows that worldwide the percentage of counterfeit footwear is about 22 per cent, clothing 16 per cent, leather goods 13 per cent, electric equipment 12 per cent and so on. It is important to note that since brands stand for social status, trust, quality, originality and so on, any activity that compromises with this has to be curbed effectively. In order to find a holistic and permanent solution to the problem in India, a unified voice is needed so that the Government makes policies and legislations to serve the best interests of consumers and the country. Vigorous consumer awareness campaigns need to be undertaken on a large scale apart from multimedia campaigns such as the Government’s Jago Grahak Jago initiative. This will enable consumers to differentiate between genuine and fake products. The Indian industry must also take steps to safeguard the integrity of supply chains of their products, check notorious markets regularly and use technology to track and trace movement of their original products in transit. The industry has to give a thrust to risk assessment and make more investments in intelligence services. However, to check this menace, the whole-hearted support of the Government is necessary and it has to establish a nodal vigilance agency for regular monitoring of illegal activities.

A constant dialogue with international stakeholders will also help in disseminating global best practices and legal provisions dealing with such crimes need to be reinforced as extant bail provisions are not severe and convictions are low. In order to effectively curb illegal trade, bail bonds should be high, there should be stringent monetary penalty for offences and imprisonment should be more rigorous and for a longer term.

It has been observed globally that certainty about infliction of penalty is more effective than the severity of the penal action. Hence, investigation and prosecution must end in a specified period. For this, we need separate commercial courts manned by specially-trained judges. Dynamic injunctions coupled with punitive damages and making the provision of arbitration applicable for such offences are also vital. There is a need for a comprehensive national legislation to deal effectively with organised crime.

According to a Thought Arbitrage Research Institute (TARI) study commissioned by FICCI-CASCADE (Committee Against Smuggling and Counterfeiting Activities Destroying the Economy), titled Invisible Enemy: Impact of Smuggling on Indian Economy and Employment, revenue and livelihood opportunities are lost due to smuggling in five specified industries, namely textiles, tobacco products, readymade garments, machinery and parts and consumer durables like electronics. The report highlights the key challenges posed by smuggling and suggests possible solutions to make compliance and related processes more robust with the overarching objective of arresting the spread of smuggling.

The study also took into account the impact on direct employment, backward linkages and multiplier effects of these industries as per universally accepted norms. The report stated that the total direct livelihood opportunity lost in these five industries was about 5.01 lakh in FY18. Out of this, 3.55 lakh was in readymade garments and tobacco products, which are labour-intensive industries.

Estimates of cigarette smuggling based on consumption approach showed that the quantum of smuggling of cigarettes was Rs 8,750 crore in FY18, resulting in 14 to 20 per cent of output loss to domestic tobacco manufacturers. Estimated smuggling in the readymade garments industry rose to Rs 5,509 crore in FY18. The study recommended strengthening of domestic manufacturing and reducing the demand-supply gap by making more goods available through legal channels. It also batted for urgent review of Government policies such as emphasis on enforcement action and priority on coordination between different Government agencies. It sought leveraging of technology for trade facilitation and monitoring; capacity building of enforcement agencies; strengthening risk management capabilities of customs department; better coordination among enforcement agencies engaged in anti-smuggling and greater international coordination and cooperation.

Keeping this in mind, CASCADE has been pursuing a pan-India campaign to raise awareness among consumers, policy-makers and enforcement agencies, like the police, customs and the judiciary. Each year it holds its flagship international event MASCRADE (Movement Against Smuggled and Counterfeit Trade), which is attended by delegates from India and abroad. Since, the Government wants the Indian economy to reach the $5 trillion mark by 2024 and illicit trade has a serious decelerating effect on growth, it must be curbed substantially. This will happen only if concerted effort is made by all stakeholders to ensure that an effective and workable deterrence  is created without any loss of time. In absence of such an action, it would be difficult to arrest the growth of illicit trade in India and the world.

(The writer is former Chairman, Central Board of Indirect Taxes and Customs and Advisor, FICCI-CASCADE.)