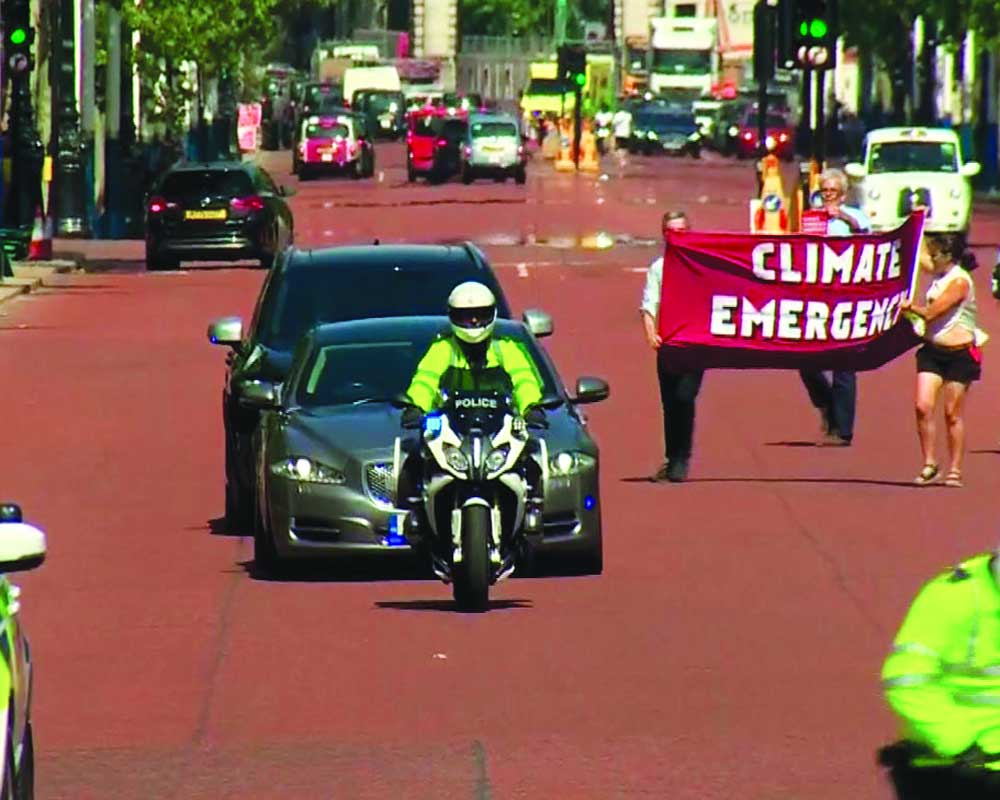 The UK has been quite unique as a developed nation, having enacted the country’s Climate Change Act in 2008. According to the Committee on Climate Change, a statutory independent body, by 2017 its greenhouse emissions were 43 per cent below 1990 levels while the economy grew by two-thirds over the same period. The Act calls for the UK to reduce these emissions by at least 80 per cent by 2050, compared to 1990 levels. The remarkable aspect of this Act is that it cuts across party lines and binds the country to a set of measures enacted by Parliament. But, of course, much more needs to be done now to ensure that human society does not allow the earth’s temperatures to exceed 1.5°C by the end of this century.

Meanwhile, according to meteorological information, the year 2019 has already crossed previous limits and is heading towards becoming the hottest year on record. At the same time, all across the world, there are extreme events ranging from heat waves to extreme precipitation events, which have increased in frequency and intensity. This year there were also reports that a widespread area in the Arctic had raging fires right from Siberia to Alaska.

The Arctic region, according to the Fourth Assessment Report by the Intergovernmental Panel on Climate Change (IPCC) published in 2007, estimated that the Arctic region was warming at twice the rate of the rest of the globe. The extreme heat this year and in earlier periods is also melting the Greenland ice sheet at a rapid rate, which would enhance sea level rise dangerously. Drastic measures are required to curb greenhouse gas emissions and these include lifestyle changes as well.

It is questionable whether the new Prime Minister of Britain, Boris Johnson, is truly committed to action on climate change and certainly, he is not likely to make any lifestyle changes himself or motivate others in the UK to do so. This writer had addressed a gathering of professionals in London in 2008, where he clearly highlighted the need for reducing meat consumption, based on his plea, “Please eat less meat, because you would be healthier and so would the planet.” The UK beef industry, of course, was very critical of this appeal but surprisingly, so was the current Prime Minister of Britain, who was then the Mayor of London.  He wrote an op-ed piece in the Daily Telegraph on September 9, 2008, which while ridiculing advice to cut down on meat consumption, wrote the following.

“No, Dr Rajendra Pachauri, distinguished chairman of the panel, I am not going to have one meat-free day per week. No, I am not going to become a gradual vegetarian. In fact, the whole proposition is so irritating that I am almost minded to eat more meat in response.

Every weekend, rain or shine, I suggest that we flaunt our defiance of UN dietary recommendations with a series of vast Homeric barbecues.”

Johnson ignores the fact that the IPCC makes no recommendations. Its assessments are policy-relevant but not policy prescriptive. He states further, “We are going to have carnivorous festivals of chops and sausages and burgers and chitterlings and chine and offal, and the fat will run down our chins, and the dripping will blaze on the charcoal, and the smoky vapours will rise to the heavens.

We will call these meat feasts Pachauri days, in satirical homage to the tofu-chomping UN man who told the human race to go veggie.”

There is considerable speculation in the British media on whether Johnson’s live-in partner Carrie Symonds might actually be able to influence his position on climate change, perhaps with some changes in lifestyle as well and possibly have him forego the excessive craving for meat feasts, which he had referred to as Pachauri days.

While one can be amused with Johnson’s humour, it would be unfortunate if the Prime Minister of a country as important as the UK, and which has had the vision of enacting its climate change law, sticks to his old position. Who knows, perhaps he has actually reduced his meat consumption because he certainly seems trimmer than was the case when he was the Mayor of London. It may be that Symonds will be a productive influence on the man who is now the British Prime Minister and, thus, send a message to the public in that nation.

Johnson in his article also stated, “Man is an omnivore, culturally and probably biologically programmed to take protein from meat; and those meat animals must be farmed.” The meat industry undoubtedly was thrilled with this view.  Sadly, Johnson obviously has not realised that the entire global meat cycle is very intensive in the use of energy, right up to the stage where households store meat in their refrigerators.

Added to that is the clearing of forests as pastureland, such as with the Amazon rainforest, and providing CO2 intensive feed material produced in larger and larger quantities for livestock. An IPCC report just released provides a stark warning of land just not being available on planet earth if we consume meat at current levels. This report establishes the escalating conflict between meat production and other more essential uses of land.

Sadly, the current President of Brazil, Jair Bolsonaro, who subscribes to US President Donald Trump’s and Johnson’s views, has recently sacked the head of the National Institute for Space Research, which has been monitoring deforestation in the Amazon region. After Bolsonaro’s assumption of office, deforestation in June was estimated by this organisation as 88 per cent higher than the same period last year.

It is unfortunate that leaders of major countries choose to ignore the truth or deliberately serve the interests of lobbies, who just want to maximise their profits without regard to the future impacts of climate change.

This mental inertia has to be overcome through public consciousness and grassroots action, as has been the case in several countries of the world. It is the youth of the world who now need to take the lead and implement actions to reduce the emissions of greenhouse gases, which are responsible for human-induced climate change.

Fortunately, this is now gaining momentum with the efforts of Greta Thunberg, the 16-year-old Swedish activist, and the Protect Our Planet (POP) movement being implemented in several countries. But when do we get leaders with a conscience and those who care about our future?