Learn to live together

Learn to live together 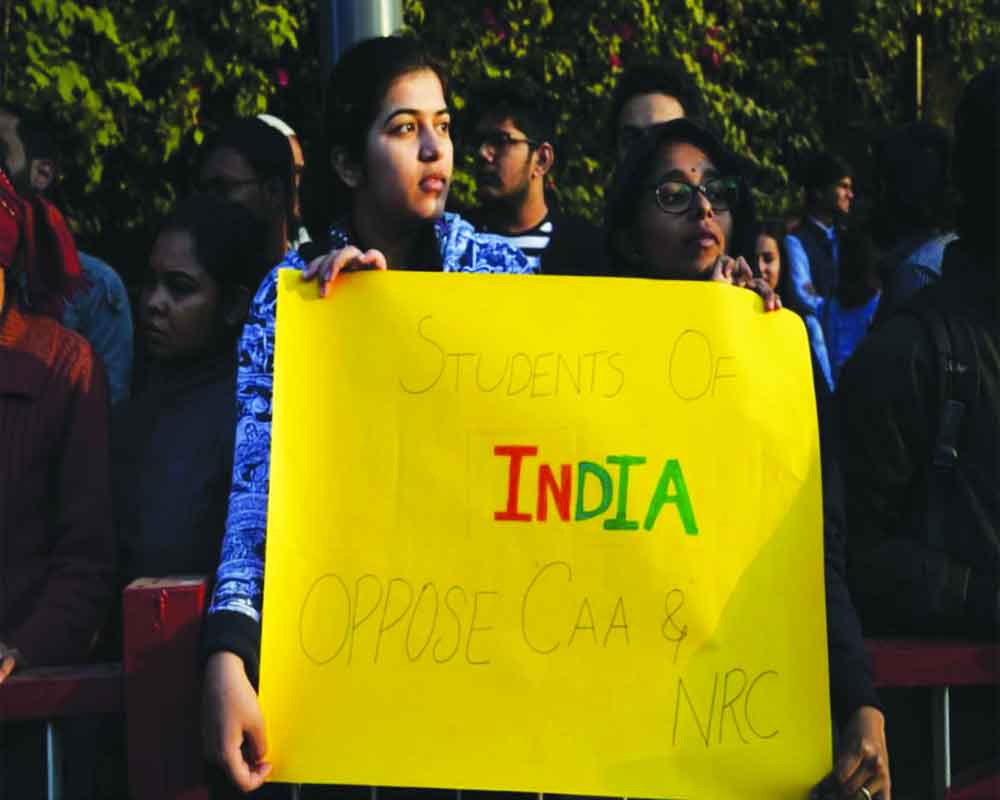 This is a critical component of education globally as people are moving to alien locations and have to coexist with those belonging to different economic, cultural and religious backgrounds

Freedom of expression constitutes the backbone of people’s faith in the democratic process. This freedom of expression also permits organised protests on issues that indicate a difference between governments and a certain section of the people. Vested and anti-social groups and individuals invariably infiltrate in such organised protests and often succeed in misleading sensitive,  educated people in colleges and universities. Small-time politicians never miss such opportunities of fuelling the fire. This is what is being witnessed in India in the name of protests, some of it genuine, some of it instigated against the NRC and CAA in  universities and cities.

In India, education is being subsidised by the taxpayer; crores of them live below the poverty line and even sleep hungry.  It is indeed unimaginable that public property could be vandalised by people who love India and Indians! Is something seriously wrong with our education system which has prepared those in power today and is preparing the next generation to take over the reins of the nation tomorrow? Education planning must extend its canvas beyond course completion and percentage of marks in Board examination. Is it not a serious inadequacy of school education that the selected group of young people that comes to universities is largely bereft of its social and national responsibility and becomes a pawn in the machinations of few anti-social and unscrupulous elements in the game of creating disturbances and destruction? While law-enforcing agencies shall take immediate steps to check violence and destruction, the nation must ponder over possible long-term strategies rather urgently.

We have a great opportunity of introducing transformational reforms in education at this juncture. 2020 could indeed be a defining year in Indian educational reforms, resplendent with high expectations, generational aspirational and inevitable transformational initiatives. One expects the new National Education Policy; NEP-2020 will see the light of the day “very early” in the year ahead and that the programme of action would be launched in full flurry by the Ministry of Human Resource Development (MHRD), for which prior preparations are already under way. The NEP-2020, once it is announced and implemented, shall have the strength of unprecedented levels of consultations on one hand and also be a rare outcome of two successive committee reports.

The first committee, tasked to prepare the draft of the new education policy, was appointed by the MHRD in October 2015 under the chairmanship of TSR Subramanian and submitted its report in April 2016. The MHRD felt the need for more consultations and appointed another committee under the chairmanship of K Kasturirangan. This report, submitted in May, was made public on the same day and everyone was invited to offer his/her comments and observations.  It is reported that these have been examined by experts in concerned professional institutions and the MHRD has almost finalised its final draft. The suggestions received from individuals, experts, scholars, institutions and outcomes of numerous consultation meetings and interactions constitute a rare collection of documents and data which  must be analysed in years to come  through well-organised researches and studies as it would authentically indicate the social, cultural and  economic connect of education to the swift changes that now engulf the entire content and process of education in our schools and institutions of higher learning and research.

Several unprecedented challenges would emerge before educational policy planners and implementers in 2020.   Several of these were known earlier but not appropriately prioritised earlier.  One sincerely expects that the pioneers of new education initiatives in India shall remember the golden words of the Delors Commission Report of the UNESCO International Commission on Education in the 21st century: “Education is also an expression of affection for children and young people, whom we need to welcome into society, unreservedly offering them the place that is theirs by right therein — a place in the education system, to be sure but also in the family, the local community and the nation. This elementary duty needs to be constantly brought to mind, so that greater attention is paid to it even when choosing between political, economic and financial options. In the words of a poet: ‘The Child is the Father of Man’.”

The Kasturirangan Committee has taken conscious note of the inadequate definition of education. Two of its suggestions are in fact path-breaking and have the potential to usher in the much sought after balance needed to bring the best out of “head, hand and heart.”  It recommends complete abolition of bifurcation of liberal and vocational education. Further, the Draft NEP-19 realises the importance of initial years of education and has made very bold recommendations to modify the existing RTE Act to include children in the age group of three to 18 years. The need to accept and adapt a holistic approach to education, has been highlighted in the Draft NEP-2019, as “India has had a long and illustrious history of holistic education.” The Indian tradition of knowledge generation, creation and transmission to the next generations was always directed not only at “preparation for life in this world or for life beyond schooling, but for complete realisation and liberation of the self.” There could be no better articulation of these aspects than the words of Swami Vivekananda quoted in the NEP-2019: “Education is not the amount of information that we put into your brain and runs riot there, undigested, all your life. We must have life-building, man-making, character-making assimilation of ideas. If you have assimilated five ideas and made them your life and character, you have more education than any man who has got by heart a whole library. If education is identical with information, the libraries are the greatest sages of the world and encyclopedia are the greatest rishis”. He persistently pleaded for man-making and character-forming education.

The goal of holistic education requires serious conceptual and structural changes in the content and process of education. It is necessary to realise the scientific basis of the importance of learning in early years. Zero to eight are the most crucial years and this realisation comes forth very strongly in the Draft NEP-2019 when it recommends substantial  changes in school education in the format of 5+3+3+4. These represent foundational stage of grades 1-2; preparatory stage of grades 3-5, middle stage covering grades 6-8 and secondary stage of four years; 9-12. Acceptance of this suggestion of focussing on early years and removal of distinction between liberal and vocational education could usher in an era of much-needed focus on education of the heart. It should also be properly comprehended at the implementation stage that education must assist not only in developing “cognitive skills — both ‘foundational skills’ of literacy and numeracy and ‘higher-order’ cognitive skills such as critical-thinking and problem-solving — but also social and emotional skills. The last are also referred to as “soft skills”, including cultural awareness and empathy, perseverance and grit, teamwork and leadership, among others. The process by which children and adults acquire these competencies is also referred to as Social and Emotional Learning (SEL).”  It was amply realised by the Delors Commission in 1996 that one of the four pillars of education in the 21st century would be “learning to live together”. This is now the critical component of education and learning globally as people are moving to alien locations and are destined to live together with people who may be vastly different in social, economic, cultural and religious backgrounds. It must be acknowledged that such diversities are causing severe anxiety situations and eruption of violent reactions and clashes are no longer rare exceptions.

The young of today shall have to live together with diversities practically in most of the countries and India would be no exception.  In fact, many of the European nations are looking towards India to learn how it could live with adherents of different faiths and religions for thousands of years.  India has its own issues within the nation and also mounting pressures from jealous neighbors who would not relish its successful march ahead on the path of development and progress. Our young persons, in their initial impressionable years must learn how to celebrate diversity. They must also learn how deeply endowed was the culture of ancient India that realised the “essential unity of all human beings”, and also propagated that every religion must get equal respect from the followers of other religions, as there  could be different and divergent paths to reach the same ultimate truth. There is no other way out than the culture of acceptance of diversity.

(The writer works in education and social cohesion.)