Lurching from crisis to crisis

Lurching from crisis to crisis 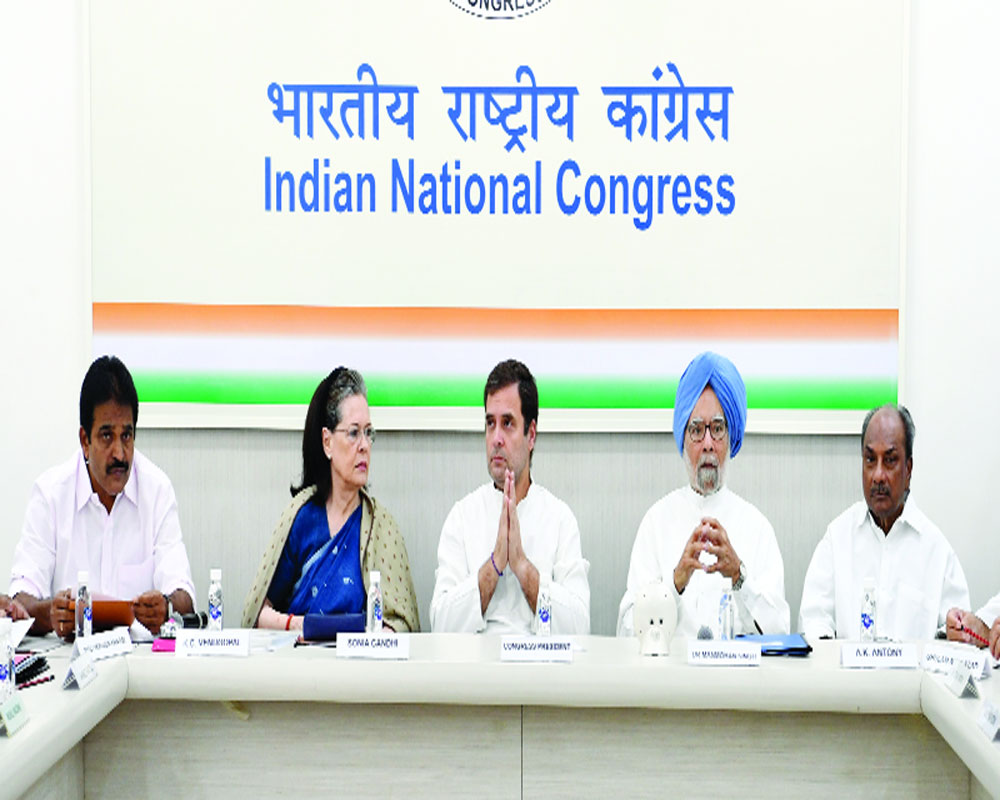 Although Sonia Gandhi’s formidable personality holds the Congress together, the party is beginning to flounder in the absence of clarity on whether Rahul Gandhi’s resignation has been withdrawn or accepted. The Wayanad MP offered to quit at the Congress Working Committee (CWC) meeting on May 25, taking full responsibility for the failure to dislodge the Modi Government, and for the miniscule increase of eight seats from 2014 (44 to 52); top party leaders rejected the resignation.

Over two weeks after the CWC meeting, the Congress remains clueless about the reasons for its debacle. While an aggrieved Rahul Gandhi felt that it was because other leaders did not pick up his refrain of ‘Chowkidar chor hai’ to publicly indict the Prime Minister, the fact is that the Rafale deal failed to excite voters even in States like Madhya Pradesh, Chhattisgarh and Rajasthan where the party had seized power only months ago. Unlike the Bofors kickbacks scandal, Rafale lacks a money trail leading to foreign bank accounts of people close to those in power, and seemed a desperate ploy to attract voter attention. The Congress flopped because of this negative campaign; the rout could have been more severe if other leaders had picked up this dud slogan. Gandhi’s basic income scheme (Nyunatam Aay Yojana) was too obtuse to be understood by party workers, who simply omitted to mention it in their grassroots campaigns.

The Congress’ woes have been aggravated by Priyanka Vadra’s failure to deliver in eastern Uttar Pradesh. The party won only Rae Bareli and lost Amethi, even as the Bharatiya Janata Party (BJP) triumphed with 62 seats and enhanced its vote share from 42.63 per cent to 49.55 per cent. Clearly, Priyanka Vadra cannot be deputed to succeed Rahul Gandhi. Whispers in the party question her failure to resign after the debacle; her arrogance in mooting a challenge to Prime Minister Modi in Varanasi has boomeranged badly.

The Congress is in crisis. Its recent victories in Rajasthan, Madhya Pradesh and Chhattisgarh are now being attributed to strong and focussed local leaders who carried conviction with voters. With Rahul Gandhi refusing to meet senior leaders, the leadership vacuum is causing problems in the State units, and even at party headquarters in Delhi.

In Punjab, the Chief Minister has chastised the loud-mouthed Navjot Singh Sidhu whom he holds responsible for the party’s average performance, but Capt Amarinder Singh does not owe his status to the backing of the Congress high command. In Rajasthan, the party is in the throes of a meltdown, with supporters of Chief Minister Ashok Gehlot and State unit chief Sachin Pilot in a blame game. Dodging Rahul Gandhi’s accusation that obsession with his son (Vaibhav) cost the party in Rajasthan, Gehlot is asking Pilot to take responsibility for Vaibhav’s defeat.

In Madhya Pradesh, Chief Minister Kamal Nath managed to ensure the victory of his son, Nakul, but that is the party’s sole victory. Understandably, supporters of Jyotiraditya Scindia are snapping at his heels, demanding that Scindia be made Pradesh Congress Committee (PCC) chief in place of Kamal Nath. Growing demands for the stringent application of the ‘one-man-one-post’ norm in States ruled by the Congress will intensify the infighting.

As of now, even office bearers at the central headquarters are at sea in the absence of clarity vis-à-vis Rahul Gandhi’s status. If the directive of the Congress’ core committee to all PCC presidents to submit reports detailing the reasons for the debacle is honestly answered, it will only put further question marks on Rahul Gandhi’s political acumen.

Meanwhile, family loyalist and former Union Minister, M Veerappa Moily, has warned that the prevailing impasse will cost the party dearly. Urging Rahul Gandhi to “quell” the current indiscipline, Moily said that if the Congress president is adamant about quitting, he should hand over the reins “to the right person, right hands”. But who could that be? With Mallikarjun Kharge defeated in Gulbarga (Karnataka), Congress’ cup of sorrows is full.

Pointing out that the Congress has not split in the two decades since Sonia Gandhi ousted Sitaram Kesri in 1998, Moily stresses the importance of showing leadership at this stage, otherwise, the party could fragment. Aware of the stakes, the party quickly elected Sonia Gandhi as leader of the Congress parliamentary party on June 1 this year. Observers say this provides some space in which Rahul Gandhi can be persuaded to continue as president, to stave off a challenge to the Gandhi family’s preeminence. As expected, the parliamentary party authorised Sonia Gandhi to nominate the leaders of the party in both Houses. Ghulam Nabi Azad will likely continue to hold the post in the Rajya Sabha.

However, to look ahead with continuity, the Congress needs Rahul Gandhi to lead in the Lok Sabha, possibly also be Leader of Opposition, should the Speaker extend this courtesy to the Congress, as it is only two seats short. At this critical juncture, party workers are not enthused at the idea of being led by uncharismatic leaders like AK Antony or Ahmed Patel.

More seriously, realisation is dawning in many quarters that Sonia Gandhi is too unwell to campaign again (she went to Rae Bareli only to file her nomination), while Rahul Gandhi and Priyanka Vadra are indifferent vote-catchers. This is why the mother-daughter duo is totally averse to letting the reins of the party slip from family hands. Many aspirational leaders would have done the math; unsurprisingly Kamal Nath took his son along when he paid a courtesy call on the Prime Minister.

To infuse morale in the rank and file, Sonia Gandhi put on her fighting face and attributed the defeat to the BJP’s “unlimited resources, ability to manipulate public opinion and the spread of mischievous propaganda”. Batting fiercely for Rahul Gandhi, she lavished praise on him for rejuvenating the Congress organisation in many States and leading it to victory in the Madhya Pradesh, Chhattisgarh, and Rajasthan Assembly elections. She asserted that the Congress president had highlighted injustices against farmers, workers, traders and small businesses, youth, women and marginalised sections of society and exposed many misdeeds of the Government.

Now, however, the immediate task for the Congress is to ward off the challenge to its numbers in the Rajya Sabha where the BJP will try to make gains in the coming months by coordinating with non-BJP Opposition parties. But it cannot do anything without first resolving the Rahul Gandhi deadlock.