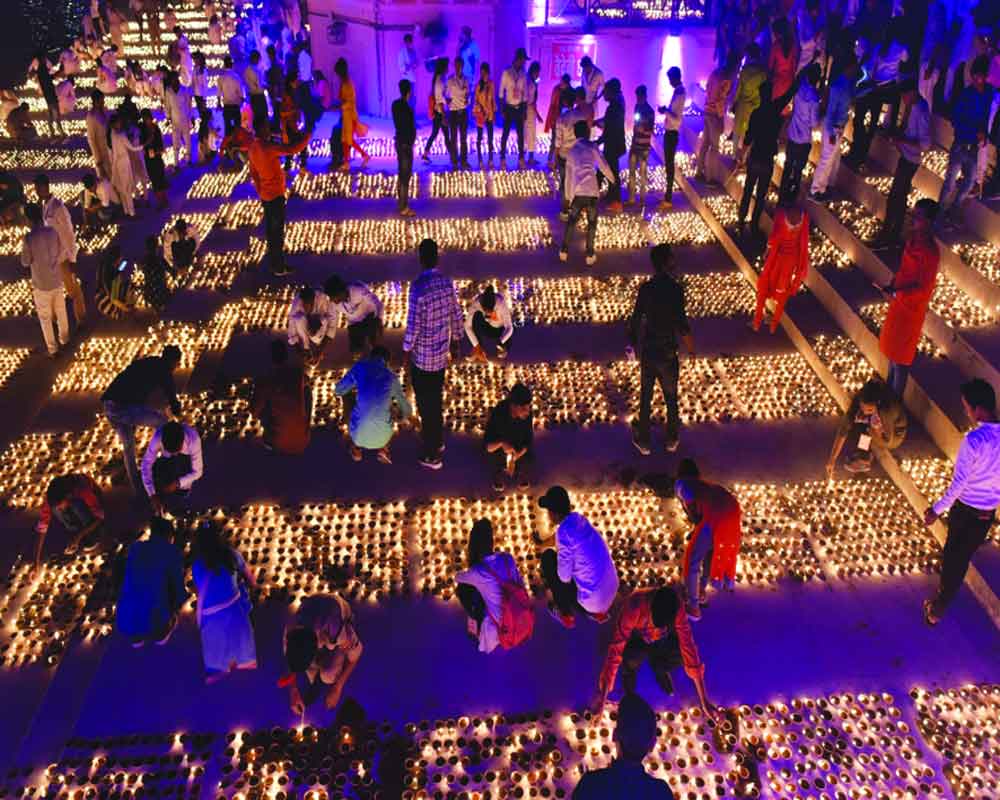 The day the Government plans to lay the foundation of the temple, it should also announce mega projects as this will create jobs and bring prosperity to the city

The residents of Ayodhya believe that Lord Ram was born in this temple town some 900,000 years ago. Their belief made people call this city Ram Nagri (Ram’s town). The recent Supreme Court (SC) verdict cemented this belief, settling the nearly 132-year-old dispute, which even witnessed the demolition of Babri Mosque over 27 years ago on December 6. The SC’s verdict may have opened a Pandora’s Box, with the Hindu saints wanting to be involved in the proposed Ram Mandir Trust and some sections of the Muslims unhappy about it. But, no one is talking about the opportunity the apex court’s order has thrown open for the Centre and Uttar Pradesh (UP) to transform Ayodhya into a religious tourism hub.

Almost a month after the verdict, the incoherent voices of the sants are emanating from Ayodhya about which model should be used for construction of the Ram Temple or who should head the trust, but no one is talking about how to develop Ayodhya into a tourism centre not only for Hindus but also for Buddhists because of its proximity with Kushinagar.

This part of UP, which was once the centre of Awadh culture, is basically an agricultural belt. But agricultural productivity has been steadily coming down because of repeated fragmentation of farmlands. The smaller the farm, the lesser the yield and this has adversely affected the economy of the region. This poverty-driven region has failed to make an impact because no Government ever took pains to develop Faizabad district — which has now been renamed as Ayodhya — into an industrial hub despite Tanda, a small town of this region, having made a mark in weaving sarees and clothes. With the passage of time Tanda lost its charm and Ayodhya remained neglected.

Faizabad, which is full of sugar refineries and mills for extracting oil from seeds, is a market centre for the produce of the surrounding area, including grain, oilseeds, cotton and tobacco. A hydroelectric plant is located nearby. As per the UP State Industrial Development Corporation (UPSIDC) the growth rate of industries in Faizabad district is 5.4 per cent annually. However, this is just limited to the micro and small-scale sector as the medium and large-scale sectors have a meagre annual growth rate of one per cent. These industries give direct employment to less than 10,000 people.

So, why has Faizabad-Ayodhya failed to transform into an industrial hub?

Almost all the industrial chambers say that lack of development in this area is primarily due to the poor power supply and drainage system. The other problems include non-availability of skilled manpower, lack of awareness regarding MSME schemes and technological and financial support. Some say lack of political support also hampered development of the region.

When the Ram Temple agitation gathered momentum in the late 80s, no Government dared to pump in money in different projects, mainly industrial, because of the fear that communal violence could have an impact on the economy of the region. Many parties refused to talk about Ayodhya because they felt it damaged their “secular” image.

Government records say that Faizabad has  a population of 167,544 with 50,000 of them in the Ayodhya temple town according to the 2011 census. The literacy rate of the region is around 86.52 per cent, which is higher than the national literacy average of 74.04 per cent. The credit for this goes to the presence of good educational institutions in the region. Thriving on the academic excellence of the students, hundreds of coaching institutions have mushroomed in the twin cities of Ayodhya-Faizabad.

The flourishing coaching institutes have proved to be good business for those who run them or those who teach in these institutions as faculty members. But they are largely “outsiders” from bigger cities, depriving the local talent of jobs. The city has two universities, the Rammanohar Lohia Avadh University and the Acharya Narendra Deva University of Agriculture and Technology.

In this scenario, religion is the only force that can drive the economy of this region. Residents claim that the link between Lord Ram and Ayodhya is so strong that of the 6,000 Hindu shrines and temples in the city, more than 4,000 are dedicated to him. Besides, every second month Ayodhya hosts religious festivals stretching from Magh to Kartik Purnima. These fairs are organised on the banks of the Saryu River and provide a good source of income for people and small traders.

Official records suggest that over 30 lakh pilgrims visit Ayodhya annually — this figure excludes the people from surrounding areas who gather at the fairs. People from across the country — particularly from Gujarat, Maharashtra, Bengal and South India — visit Ayodhya to pay obeisance to Lord Ram.

This is a huge number and can help in reviving the economy of the region. The question often raised is why not develop Ayodhya on the lines of Varanasi and Allahabad? Ayodhya is as important for Hindus as Varanasi is. The difference is that Kashi or Varanasi symbolises moksha (salvation) while Ayodhya symbolises karma, which asks people to fulfil their putra dharma (filial duty) and karma dharma. But, the basic difference between Kashi and Ayodhya is that Ayodhya lacks the infrastructure required for promoting religious tourism while Kashi has a very good infrastructure, including a working airport and good rail and road connectivity.

Apart from this, Ayodhya does not have proper hotels despite having a major footfall of pilgrims. The only stay-ins are dharamshalas (shelters) which are of poor quality and lack basic facilities. The only good hotels are found in Faizabad and they are few in number and very expensive.

The only thing that will help  Ayodhya turn into a Kashi is good hotels, preferably on the bank of Saryu River, with rooms facing the Ram Temple. Besides, the city needs good roads, permanent electric supply and greater  rail and road connectivity. A working airport with flights from cities like Delhi, Kolkata and Mumbai would add to its popularity. Fortunately, the Yogi Adityanath Government has launched many projects in Ayodhya and the Chief Minister has been advocating construction of a Ram Temple. He even proposed the construction of the tallest statue of Lord Ram on the banks of Saryu River and gave the festival of Diwali a new meaning. He is on record saying that his Government would ensure that Ayodhya regains the glory it had achieved during the Treta Yug (second age of mankind).

UP made a Guinness World Record by lighting over 500,000 earthen lamps on Deepotasava on the banks of the Saryu River in October. Helicopters showered flower petals and models from Delhi dressed as Ram, Sita and Lakshman descended in a chopper.

The Union Government has come up with an ambitious project that will  be executed by the UP Government. Ramkatha Park will be part of a new Rs 133 crore “Ramayan circuit” that will include a market and a Korean temple on the Saryu riverfront. The project will depict events described in the Ramayana. An imposing Ram court will be constructed at the site where  Adityanath held a Diwali puja. The court will include a gallery depicting the story of Ram and a state-of-the-art digital museum.

The beginning seems to have been made. But much more is required to be done. The ancient should amalgamate with modernity. Ayodhya should retain its pristine beauty but also have something to attract the young generation. The Government should come out with a blueprint and involve the citizens in this work. Good roads and electricity will make work easy for the planners. Good incentives to hoteliers may prompt them to invest here. Even the involvement of the Korean Government can add a new dimension.

Time is running out. The day the Government plans to lay the foundation of the Ram Temple, it should also announce mega projects for the city. Only good planning can transform the region into a tourist hub, which in turn will create jobs for the youth and usher in prosperity. Only then will it truly be Ram’s Ayodhya. In the end, that route will have to find its way through economics.

(The writer is Executive Director, News, The Pioneer, Lucknow)