Nobody joined the dots

Nobody joined the dots 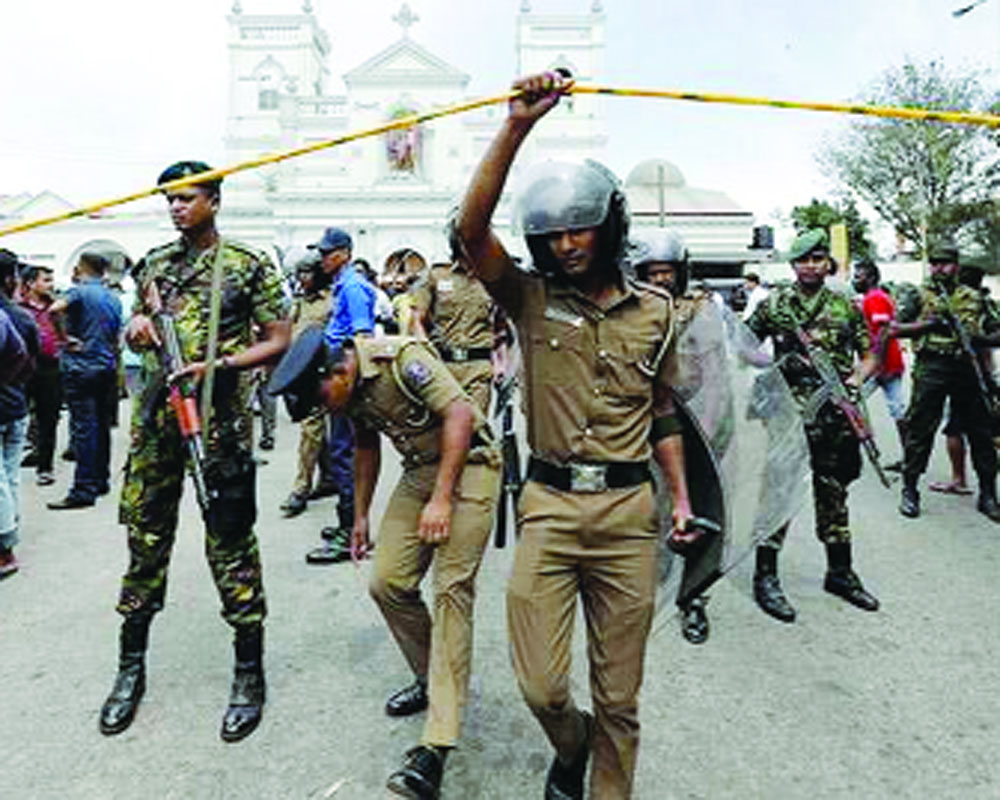 The Easter Sunday self-inflicted tragedy was in military parlance a total command failure, which is likely to take Sri Lanka a decade back

Neither Sherlock Holmes nor Alfred Hitchcock would have been mystified by intelligence oversights that led to one of the world’s most dastardly terrorist attacks in Sri Lanka last month. Simply because it was a case of just connecting the dots — so detailed and specific were the tip-offs. According to a top secret intelligence memo of April 9 (there were two others before the fateful day dawned on Easter Sunday), the country’s intelligence chief had warned the Inspector General of Police that “Zahran Hashim of the National Tawheed Jamaat and his associates were planning to carry out suicide terrorist attacks in Sri Lanka shortly.” How this classified warning was not shared with President Maithripala Sirisena and Prime Minister Ranil Wickremesinghe is a riddle. Rarely has there been an intelligence goof-up of this magnitude in recent memory.

That such a catastrophic intelligence foul-up took place in Sri Lanka, which only a decade ago had destroyed the invincible  Velupillai Prabhakaran-led Liberation Tigers of Tamil Eelam (LTTE), ending root and branch a 30-year-long deadly insurgency and becoming the first country to achieve such a feat in the 21st century, is intriguing. The Army, Navy and Air Force have held annual international seminars in Colombo to showcase their military successes, including the Army’s prowess in deep penetration intelligence acquisition skills. According to the then Defence Secretary and brother of former President Mahinda Rajapaksa, Gotabaya Rajapaksa, now a presidential hopeful for the elections this year, the present Government dismantled the elaborate intelligence and surveillance network of 5,000 personnel he had set up in 2011 across the country, including the Muslim majority areas of the east.

Nine suicide bombers, including one woman, struck in coordinated attacks followed by two or three hara-kiri acts by family members and associates of the mastermind  Hashim. It is now known that the suicide squad consisted of 15 members and the support group was 150 of whom 100 cadres have been arrested. Thirty-six Sri Lankans are reported to have gone to fight with the Islamic State in Syria and many had returned. The preparation for serial human bombing of this scale and sophistication would have taken months if not years. Sirisena has revealed that planning for the attacks started in Syria in 2017. How this massive diabolical plot escaped detection is a mystery. The Sri Lankan Army Commander, Lt Gen Mahesh Senanayake, in an interview to BBC, has said that the suicide bombers “got some sort of training” in Kashmir and Kerala. This should worry India. Given the severe communal polarisation exacerbated by the elections, major terrorist attacks are not unlikely in India in the near future.

In 2017, I retraced my times with the Indian Peace Keeping Force (IPKF) 30 years ago in the east, travelling through Muslim majority Ampara and Kalmunai areas near Batticaloa and saw an increased density of population, mosques and madrassas as also prosperity and development. The Muslims were targeted by the LTTE notably in their massacre in Sri Lanka’s biggest mosque in Kattankudy near Batticaloa in the 1990s. (Kattankudy is the hometown of Hashim, the mastermind of the attacks and its training ground).  Later, the Sinhala Buddhist extremists Bodu Bala Sena (BBS), ostensibly supported by the Government, targetted Muslims periodically from 2013, culminating in the big anti-Muslin riots in Kandy last year, which led to the Government declaring an Emergency. The trigger for Muslim alienation and radicalisation is the BBS attacks and objections to hijab and halal. How the Government did not pick up these straws in the wind is an enigma.

Initially, the Government ascribed the horrific attacks to the Islamic State (IS)-inspired Sri Lankan Muslim National Thowheed Jamath (NTJ) as retaliation for Christchurch till IS supremo Abu Bakr Al-Baghdadi claimed responsibility as revenge for loss of Baghouz, the caliphate’s last bastion in Syria. Sri Lanka’s own counter-terrorism czar, the Singapore-based Rohan Gunaratna, confirmed that IS has created support groups around the world and NTJ has joined the IS.

The rift and infighting between Sirisena and Wickremesinghe is a folklore. The politics of the carnage is beguiling. Sirisena has squarely blamed the Prime Minister, the Defence Secretary and the Inspector General Police and said he was kept in the dark and that he would reconstitute security structures. On his part,  Wickremesinghe said, “I did not know…still we have to take responsibility for that part of Government machinery that did not work.” Sirisena is not only the Defence Minister but has also kept the Law and Order Ministry with him, some say, unconstitutionally. This has kept Wickremesinghe quarantined from defence and security, including national security council meetings. That the left hand did not know what the right hand was doing is the black hole in the security system.

Former Army Commander General Sarath Fonseka was the key architect of victory of the LTTE but he fell out with the old regime’s top leaders, the  Rajapaksas. The Sirisena Government appointed Fonseka a Field Marshal and a Minister. Speaking in the Emergency debate in Parliament after the bombings, Fonseka lambasted his own Government, including Srisena, Wickremesinghe and other defence and intelligence officials. Demands for making Fonseka Minister for law and order are increasing.

Sri Lanka is under Emergency rule with the Prevention of Terrorism Act in place but is likely to be replaced with the new counter-terrorism Bill. It is the first country to ban the face veil in South Asia. Both the curfew and ban on social media were lifted after a week. The preliminary report on the bombings has been completed, which Sirisena is keeping close to his chest. A new military command territorially, including parts of west and northwest provinces, including Colombo and Puttalam and strangely called Overall Operational Command, has been established and coastal security beefed up. India’s offer of sending its elite National Security Guards has been politely rejected. The joke in Colombo is about how NSG messed up in Mumbai in 2008 taking four days to complete the operation. Tongue-in-cheek Sri Lankan military veterans say what the IPKF started and did not complete, we finished.

Over-indulgent in its conquest of LTTE, Sri Lanka let its guard down. A dysfunctional cohabitation Government has been rent apart by catastrophic terrorist attacks, which are likely to take Sri Lanka a decade back. The Easter Sunday self-inflicted tragedy was in military parlance a total command failure. That neither the Prime Minister nor President has resigned is to borrow a famous war time Churchillian one liner: A riddle wrapped in a mystery surrounded by an enigma.