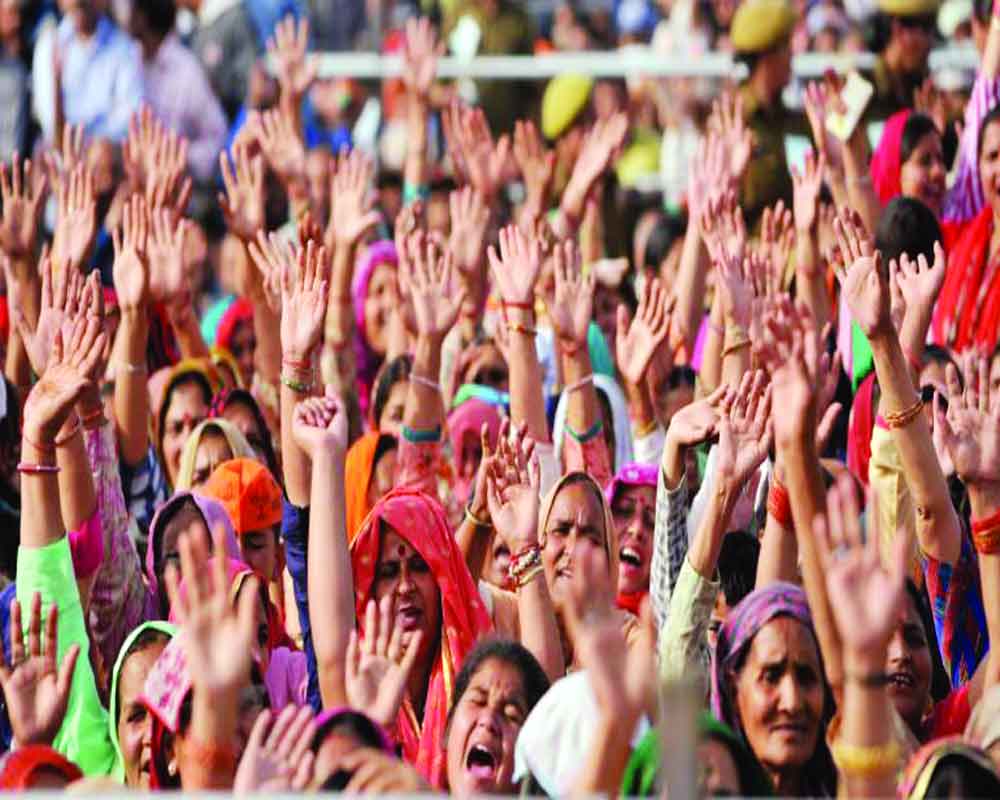 What’s the use of India’s track record of holding regular polls if voting rights of half its population, mostly women, are compromised at the altar of an inefficient registration system?

The over-riding discussion during this electoral season in India is obviously focussed on who will occupy 7, Lok Kalyan Marg in the capital and the treasury benches in Parliament after May 23, and what factors will determine this outcome. But little attention is being paid to one of the most critical pre-election issues — the unexplained absence of millions of eligible women voters from electoral rolls in many parts of the country resulting in an alarming gender gap in voter registration.

The subject of “missing women voters” has been underscored by veteran psephologists Prannoy Roy and Dorab Sopariwala in their  recently released book on Indian elections, The Verdict. Based on the 2011 population census, they estimate that the proportion of women entitled to vote in 2019 should be 97.2 per cent of their male counterparts. However, as per Election Commission data, the corresponding ratio is only 92.7 per cent. This shortfall of 4.5 per cent in the female voting population may seem insignificant per se but in absolute terms, it translates into a whopping 21 million disenfranchised women, which is equivalent to about 38,000 women voters per constituency across the country. Such an exclusion is nothing short of a demographic disaster in an “alive and kicking” democracy and cannot be merely dismissed as an inadvertent enumeration error. The numbers are even more alarming when seen in the context of the consistent non-registration of women of voting age over the last 25 years, going up from an average of three million in the early 1990s to six million during the 1997-2002 period to 19 million between 2002 and 2014.

These figures also conflict with the trend of a progressive rise in electoral turnouts of women since the 1967 Lok Sabha elections, when the male turnout was 11.25 percentage points higher than that of women, the highest gender difference in voting recorded till date for any general election. Coming down to 8.36 per cent in 2004 and 4.42 per cent in 2009, the gender gap in actual voting stood at merely 1.79 per cent in 2014, while in 2019, the number of voting women is expected to overtake that of men in several constituencies. Calling this a startling transformation in the history of Indian elections, Roy argues that the Indian woman voter, especially in rural areas, now clearly knows her mind and is determined to exercise her right without being swayed by her male kin.

What then would be the impact of leaving such a large number of women out of the electoral process? Could this represent a deliberate attempt to keep away a specific section of women from polling booths because of their preferences for or against any political party? Most pollsters agree that women’s increasing turnout and political assertiveness could be a major swing factor in these elections. Unfortunately, however, the decisive female influence could be diluted by a gender bias, mirrored in the Sex Ratio of Voters (SRV), or the number of female voters per 1,000 male voters.

Sociologists and demographers claim that the distorted SRV is a manifestation of the skewed population sex ratios in certain States, especially Uttar Pradesh (912), Rajasthan (928), and Maharashtra (929). Significantly, these States also account for the largest number of unregistered women in electoral rolls — Uttar Pradesh (6.8 million), Maharashtra (2.3 million) and Rajasthan (1.2 million). The enormity of the exclusion is evident from the fact that on an average, 85,000 eligible women will not be able to vote in every single constituency in a key State like Uttar Pradesh. In contrast, women voters are likely to outnumber men in States like Kerala, Andhra Pradesh and Goa, which have healthy sex ratios of 1084, 993 and 973, respectively.

The issue of “missing women” and imbalanced sex ratios in India, stemming from gender discrimination, was first flagged by renowned economist and Nobel laureate  Amartya Sen. Similar findings have also been expounded in the India Human Development Survey (IHDS), a nationally representative survey of about 42,000 households conducted jointly by the National Council of Applied Economic Research (NCAER) and the University of Maryland, in two waves, in 2003-04 and 2011-12. The IHDS shows that despite rapid economic growth spanning this period, India cannot claim to have a robust gender scorecard. The only bright spot has been a rise in women’s enrollment in education over the last two decades, which could, perhaps, account for greater awareness among them and consequently their increased participation in elections.

The IHDS has an interesting module administered to 30,422 married women in the age group of 15-49 years. With a response rate as high as 92 per cent and the use of female interviewers to conduct studies in various local languages, IHDS offers a host of intuitive results. Among these is a dichotomy in the social and political behaviours of women from different religions, which perhaps also affirms increasing polarisation of the nation’s political space from a gendered perspective. There is thus clear evidence that gender is emerging as a fundamental axis of Indian democracy, alongside caste, class and religion.

With such multitudes of women being deprived of their entitlement to vote, political decisions based on election outcomes will inevitably under-represent female priorities, they conclude.

What use is India’s track record of holding regular elections and consistently instituting a democratic Government if the voting rights of half its population are compromised at the altar of an inefficient registration system? In many ways, therefore, undermining women’s suffrage in India’s elections is akin to the market failure of its democracy in economic terms.

(The writer is Editor at the National Council of Applied Economic Research. Views expressed here are personal)