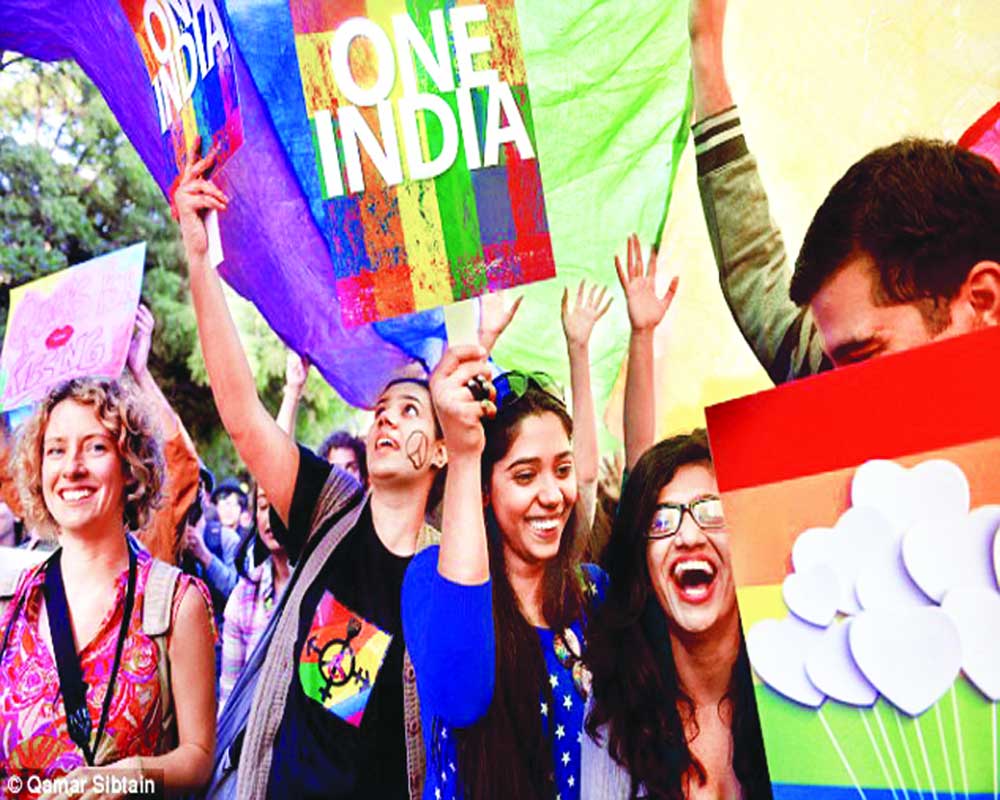 Despite decriminalisation of Section 377, inclusion in the mainstream remains a pipe dream as LGBTQs continue to struggle for an identity and acceptance

On September 6, 2018, in a landmark judgment, the Supreme Court (SC) decriminalised Section 377 of the Indian Penal Code (IPC) and allowed consensual gay sex between adults in private. The apex court’s ruling that criminalising gay sex was “unconstitutional, irrational, indefensible and manifestly arbitrary,” was met with widespread celebrations by the LGBTQ community across India. However, despite this path-breaking verdict, which delivered a powerful riposte to institutionalised disgust and contempt aimed at the LGBTQ community, nearly one year down the line nothing much seems to have changed on the ground. Inclusion in the mainstream remains a pipe dream as the LGBTQ community continues to struggle for an identity and acceptance. Members of the community face legal exclusion, ostracisation, violence and denial of access to financial and health service, among others.

Access to employment and a discrimination-free workplace continues to be a challenge for the community, particularly for transgender people, as limited access to formal education and discriminatory recruitment practices of organisations lead to their exclusion.

Despite the SC verdict, LGBTQs continue to be closeted about their sexuality over fears of potential discrimination at the workplace. More often than not, when they do come out or are outed, they often face ridicule and discrimination. In fact, the Indian LGBT Workplace Survey, 2016, shows that about 40 per cent people have faced harassment at the place of employment on account of their gender identity/sexual orientation.

More significantly, in spite of constitutional recognition of rights in various judgments, existing laws continue to exclude LGBTQ people. This becomes apparent in their day-to-day experiences with the law and the legal system.

Besides discrimination in the formal sector, LGBTQs, specifically transgenders, continue to be disproportionately targetted by enforcement agencies in the unorganised/informal sector. This is particularly prevalent in the case of sex workers and beggars, wherein transgender persons are often targeted by laws such as the Immoral Traffic (Prevention) Act, 1956 (ITPA) and anti-begging laws, respectively. The lack of regulation of the informal sector makes LGBTQ community members working in the sector particularly vulnerable to discrimination and harassment. This is also the case with laws dealing with violence as there are two cardinal problems with them. First, substantive laws may not account for the LGBTQ community, thus creating barriers in accessing such provisions. Second, prevalent discriminatory patterns lead to the well-documented persecution that they face at the hands of law enforcement agencies.

The discrimination against LGBTQ persons in substantive criminal law occurs at two levels. First, the operation of such laws in the male-female binary does not take into account the transgender identity, thereby creating a barrier for transgender persons from accessing such provisions. Second, the operation of criminal laws on heteronormative assumptions does not recognise same-sex relationships or non-heterosexual sexual orientations, thereby limiting the operation of such provisions to sexual acts in the male-female binary.

Criminal law provisions such as rape, Section 375 of the IPC, exclude LGBTQ people at both levels. By operating in the male-female binary, it fails to account for the transgender identity and by only accounting for heterosexual conduct it fails to include alternative sexual experiences.

Therefore, in light of the realities of sexual violence, a potential way forward could be the neutrality of the victim for the offence of rape and for related provisions of sexual violence. Further, in line with the recommendations of the Justice Verma Committee, introduction of a victim-neutral provision that deals with non-penetrative acts of sexual violence could also be considered.

Such an approach would recognise LGBTQ people’s right to sexual autonomy and choice and also obviate concerns of the use of a dated provision like Section 377 in instances of sexual violence. Neutrality of the perpetrator is, however, a more complex issue and would require further research to be undertaken before being considered.

However, neutrality cannot be the only answer to LGBTQ inclusion in the law and much more needs to be done in order to make access to justice a reality. This requires measures such as greater legal education, sensitisation of law enforcement authorities etc.

In India, even instances of workplace sexual harassment are dealt by the Sexual Harassment of Women at Workplace (Prevention, Prohibition and Redressal) Act, 2013 (POSH Act). Provisions in the Act, however, only recognise the complainant to be an “aggrieved woman” under Section 2(a), thereby excluding transgender persons and precluding the possibility of LGBTQ people being subjects of workplace sexual harassment.

Further, law and Government policies also render transgender identity invisible by operating in the categories of male and female or by providing only male and female prefixes such as Smt/Shri etc.

Considering the nature of identity, there is a need to strongly consider whether requiring one’s gender status is necessary for a scheme or policy. Where gender is irrelevant, schemes or polices can be actively un-gendered. The same logic could also be extended to forms in the private sector where details regarding gender identity may be irrelevant to the purpose for which the form is being filled. Active un-gendering of forms is also in line with international best practices.

In instances, where gender specification is relevant for a scheme or collection of such data is necessary for policy purposes, the requirement to provide gender status must also account for transgender persons.

Further, the law also tends to freeze identities at birth which goes against the fluid nature of identity. The Registration of Births and Deaths Act, 1969 operationalised through State rules and forms, only recognises two sexes i.e. male and female in the birth certificate. Recording this attribute is also mandatory, which thus results in the assignment of sex and eventually gender within the male-female binary. This binary understanding of male and female sex also indicates how persons with intersex variation i.e. those who do not fit into either of the two sexes are rendered invisible by the law, which ends up force-fitting them into the two categories.

Further, such laws also cause the medical community to perform non-consensual medical procedures on minors with intersex variations so that their bodies fit into the binary of male or female.

Conversations with doctors revealed that there is no uniform protocol for assigning sex at birth and shockingly, in some cases the choice of sex in infants is based on the surgical intervention that would be easiest to fit the infant into either  male or female depending on the shape of the genitalia. The need for an objective medical protocol in this regard is thus pressing.

In fact, most recently, the Madras High Court in a path-breaking judgement held that non-consensual surgery on infants with intersex variations was a violation of the SC’s judgment and directed the Government of Tamil Nadu to issue an order prohibiting such surgeries on infants. Similar measures are the need of the hour in other States as well. Ironically, in spite of the recognition of the transgender identity and an individual’s fundamental right to choose one’s gender identity in the SC’s judgment in National Legal Services Authority Vs Union of India, way back in 2014, laws have not responded adequately and still remain unclear on what the consequences of a change in gender identity would be and how rights and liabilities translate post such a change.

Even the recently introduced Transgender (Protection of Rights) Bill 2018 remains completely silent on this. Illustratively, does a marriage dissolve upon a change in gender identity because same-gender marriages are not recognised in India? Countries like Malta, Argentina and Norway have clarified the impact of such a change on the rights of persons who change their gender identity in their gender identity laws. It’s time India does the same and also makes laws more inclusive for the LGBTQ community.

The fact remains that India is home to more than 55 million LGBTQ adults and the country as a whole cannot afford to ignore them anymore, both as individuals, a market and as a talent pool.