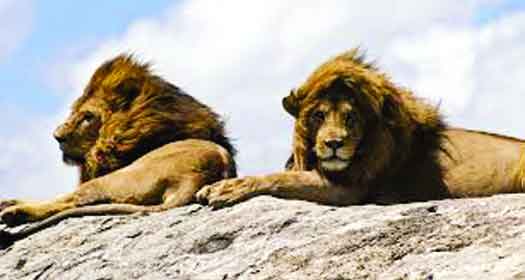 If you thought that rabies concerned only dogs, then one must look back to the records at the King Edward Memorial Pasteur Institute and Medical Research Institute, Shillong. It had published a scientific article in 1950 recording two instances of a positive microscopic finding in the brain — evidence of rabies — of the Bengal tiger in Assam, the first in 1943 and the second in 1950. In the first case, the tiger severely mauled 18 people in just over 24 hours before it was killed but made no attempt to eat any of the victims. In the second case, the tiger terrorised the inhabitants of five or six villages and attacked 14 people, at least five heads of cattle and a dog, of whom one person and the dog were killed on the spot and two others died in hospital the following day. Subsequently, the animal was killed.

The rabies virus was found in both cases. And though these two cases were examined following complaints of unseemly behaviour, several others were ignored. A few cases of leopards dying ostensibly due to rabies were also reported in south India during the British period. The rabies-inflicted stray dogs, living on the boundaries of Kruger National Park in South Africa and other reserves, are threats to predators such as lions, leopards, hyena and wild dogs. Perhaps deaths of predators by rabies do not get the exposure they deserve. The veterinary advisor for the Siberian Tiger recommended the vaccination protocol for use in all wild tigers to save them from viral disease.

Four years ago, a similar behaviour was observed in two lions — first was a male lion in Girnar on May 31, 2011, and the second was a young lioness in the Khamba range of the Gir forest on December 15, 2015. In both cases, the frenzied felines chased people and attacked a few of them, including the forest staff. The injured people were vaccinated and saved but both lions died within a few days. Symptoms like biting of tyres and frequent roaring in the daytime indicated the presence of rabies but cases were never examined to know the truth. The extent of damage by the fatal Canine Distemper Virus (CDV) attack, ostensibly a mutation or aggravation caused by the rabies virus, was taken seriously only when 23 lions died in September 2018 in the Gir forests.

In the past, deaths of the lion by virus attacks were detected but ignored because the number was not high. Unlike the lion, tigers or leopards  do not live in groups. Thus, death of one or two of them at a site by the fatal disease was ignored. It was recorded as a natural disease but facts prove otherwise. Almost every other day, news reports cite the recovery of dead leopards, tigers, lions and several other carnivores from their habitats but the cases have never been examined by virologists to confirm the cause of deaths.

In a study, four concomitant incidents of rabies related deaths were recorded in Gujarat during 2012-2014. Brain samples were collected from two buffaloes, nilgai and mongoose and rabies virus was found in all of them. Further, the genetic relationship of these isolated specimens was determined and the rabies virus transmission among the wild and domestic mammals was established. In Deva village in Allahabad district, two cows and a young buffalo cub were bitten by a rabies-infected dog. All died within two weeks. Finally, the dog was killed and the carcass was disposed off in a remote area of the village. What had happened to carnivores such as jackals and foxes, which consumed the carcass, is not known but the villagers confirmed that the carnivores had not been spotted. Why is it that the jackals are fast disappearing from the villages? Why are the hyenas becoming rare in the countryside? Why is it that the population of the wild dog (dhole) declined drastically in its habitats such as the Satpura Tiger Reserve and then recovered in a few years and again declined drastically? Is it due to the spread of rabies or any other virus? Has rabies’ presence in the domestic dog caused the loss of wildlife in an unbelievable scale? Perhaps yes. Casualties of the major wild carnivores in India due to transmission of rabies,  CDV, FIV or other viruses are high but it is impossible to provide facts about the scale of the crisis. After the lion deaths due to a CDV attack in the Gir forests, investigations indicated that like the African lions, the CDV and other viruses are present in some wild lions in the Gir forest. All of these become fatal when other diseases such as Babesia protozoa are transmitted from an unhealthy prey.

The World Health Organisation (WHO) reported that rabies is a vaccine-preventable viral disease which occurs in more than 150 countries. Dogs are the source of a vast majority of human rabies deaths, contributing up to 99 per cent of all rabies transmissions to humans. Human deaths due to rabies are known and have been well-documented but it is also primarily a disease of terrestrial mammals, including dogs, wolves, foxes, jackals, big cats (lions, leopards and tigers), mongooses, badgers, bats  and monkeys. Rabies is endemic to India and accounts for 36 per cent of the world’s human deaths due to this disease. The true burden of rabies in our country is not fully known; although as per a WHO report, it causes 18,000-20,000 deaths every year. Nobody knows how many wild carnivores die due to this disease. India had over 19.1 million domestic dogs in 2007 and a majority of them belonged to the category of feral or stray dogs. A substantial number of this forms the prey base for carnivores, especially for leopards, tigers, lions, hyenas, wolves and jackals.

In India, dogs play an important role in rabies transmission to wildlife.  However, little is known about the role of wild animals in rabies transmission. As per a study in the US, the rabies disease unexpectedly re-emerged in wildlife. Rabies is a viral zoonosis associated with many species of carnivores, including cats, jackal, hyena and bats, which are the primary hosts of the Rabies virus. Although sporadic cases of rabies in wildlife have been documented across the African continent, convincing evidence for the circulation of rabies in populations of wild carnivores has been found only in south Africa, where wild canids, such as jackals and bat-eared foxes, are assumed to be primary hosts of the virus. Although wolves, wild dogs, jackals and foxes are susceptible and readily succumb to the disease, they can disseminate the disease in other wildlife.

The carnivores — lion, tiger, leopard, hyena, wolf, and  jackal — are susceptible to diseases as they largely prey upon domestic animals, including dogs and pigs which are a carrier of pathogens. Domestic livestock, including dogs, constitute major food for these wild animals. Cases of tiger and leopard deaths are reported from time-to-time, but the institute engaged in the field of wildlife research does  not give priority to such an important problem. In the absence of adequate studies, it is difficult to assess deaths of wild carnivores due to rabies but it seems a major hurdle,  although not accepted till date of wildlife conservation in India.

To eliminate rabies in wildlife, ‘progressive control pathways’ and procedures for international certification of rabies-free status should be established. To achieve this, wildlife managers should know the extent of the problem. The sample of every dead animal should be examined scientifically in institutes that deal with wildlife or virology. Institutes, too, need to focus on the scale of natural deaths rather than just concern themselves with environment impact assessment (EIA). It has taken us long to maintain a healthy population of the big cat. Let us not lose them to another threat.

(The writer is Member, National Board for Wild life)