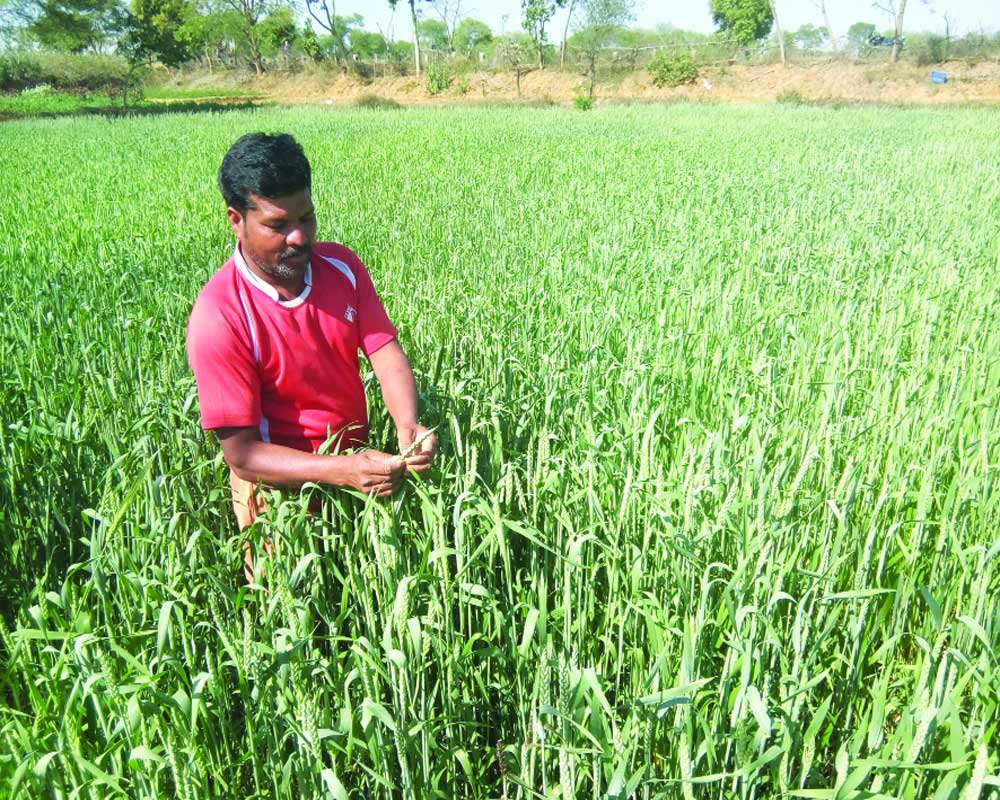 We need a structural change which will take care of all sections of the agri sector. Indian agriculture is plagued with problems so deep that if not cured, they will ruin the economy

Now we need a new structural revolution which will take care of all sections of the farm sector, as agriculture in the country is currently plagued with some serious problems which are so deep that if not cured, they might affect the whole economy. India has around 12 crore small and marginal farmers. Out of these, most are at the mercy of moneylenders, or other sources of finance that are too expensive for them to afford. Even after 70 years of Independence, the pathetic financial position of the “anndatta” (food provider) is shocking. The Government has, historically, mandated that banks ensure that 18 per cent of all their lending is given to farmers. And, to ensure that farmers get loans at low rates of interest, the Government pays a certain proportion of the interest to banks directly while the farmers pay the rest. This “subvention” cost the Government `3,045 crore in FY18 and, as compared to that, the FY20 Budget target is 37 per cent higher at `8,000 crore.

A report by a Reserve Bank of India (RBI) internal working group on agriculture credit, however, points to major problems in how the scheme is working — in which case — the Government probably needs to look at completely recasting it.

The good news here, of course, is that while formal bank credit was just around 10 per cent of total farm credit in 1951, this is up to around 70 per cent today. But, and here’s the problem, the concessional farm credit that is given by commercial banks — mostly in the public sector —is many times greater than the inputs bought by farmers. So what are the loans being taken for?

In all probability, as the researchers at ICRIER (Indian Council for Research on International Economic Relations) and other institutions have surmised, over the years, since the loans are at vastly subsidised rates, they are probably being diverted to non-farm users. It is not clear if this is done by bank managers alone or whether the farmers are also part of the deal.

The RBI found that in some States like Andhra Pradesh, Kerala, Goa, Telangana, Tamil Nadu, Uttarakhand and Punjab, bank credit is higher than the cost of inputs by farmers. Whereas in some States like Bihar, Chhattisgarh, Odisha, Maharashtra, Rajasthan, Uttar Pradesh and West Bengal, farmers are not getting credit even to meet their input requirements.

Interestingly, a study by Tata Institute of Social Sciences’ R Ramakumar and the RBI’s Pallavi Chavan had found that in FY09, as much as 46 per cent of the loans by banks were made after the Rabi sowing had ended.

The RBI study also found that while livestock, forestry and fisheries contributed around 38-42 per cent of agriculture output during 2014-16, this sector got just seven per cent of the total agriculture credit. Clearly, this is an issue that needs addressing.

The RBI study also found disparity in the number of small and marginal farmers and loans issued to them, as in some States it seems that loans are not issued to them and are issued to big farmers.

This policy has created a new set of problems, which has resulted in compromise on investments on long-term agriculture. The short-term crop loans now comprise 75 per cent of all agriculture credit as compared to 51 per cent in 2000. When overall investments in agriculture are slowing — investment-to-farm-GDP fell from 18.2 per cent in FY12 to 13.8 per cent in FYI7 — it is a matter of concern. Within this, the share of the Government has fallen even more sharply and this needs to be corrected.

Ideally, the Government should stop subsidised loans and instead, give the subsidy directly to farmers through Direct Benefit Transfers (DBT); once subsidised loans are not available from the banks, the practice of phantom loans will also stop. Over time, all agriculture subsidies should be trimmed and money should be invested in creating irrigation or other facilities that benefit the sector more.

We need to make agriculture and farmers smart by revolutionising the sector to the extent that it stays relevant in this digital era. This can be done if we start working on the basics of farming but with the help of technology. Farming has to be sustainable in the wake of climate change and degradation of our agricultural ecosystems. We need to re-look at agriculture with the farmer at the centre. Recently a high-powered committee of Chief Ministers was constituted for the “transformation for Indian agriculture.” So I would like to put forward some suggestions which could help revolutionise agriculture.

We have to work on multiplication of seeds as it is easy and most of our staples are self-pollinated crops. Excess usage of fertilisers and pesticides is polluting surface and sub-surface aquifers and our food chains have chemical residues. People are growing health- conscious and thus there is increase in the demand of organic foods. But views on managing soil health and fertility vary widely between soil scientists and indigenous knowledge experts. Science is shy to research how indigenous knowledge systems work on farmers’ fields.

Organic farming by Farmer Producer Organisations (FPOs) and Village Producers’ Organisations (VPOs) in large clusters, preferably of 1,000 hectares each, should be encouraged. Women Self Help Groups (SHGs) should also be encouraged to take up organic agriculture in clusters under the National Rural Livelihood Mission (NRLM).

Our ecology supports cultivation of highly-specialised medicinal and aromatic plants. India is home to a large number of small and cottage industries that manufacture perfumes, essential oils and other associated products. The Government should support organised cultivation and associated industry.

There are integrated crop-management systems that help in restoring ecosystems by predominantly using organic inputs.

Zero-budget natural farming is one such system. The way forward is to developing area and crop-specific sustainable agricultural practices and taking them to farmers.

Rainwater harvesting should be a national mission. Every year, India suffers with floods and drought simultaneously. Rainwater, when harvested appropriately, will reduce the pace of water flow, enabling it to seep through and charge aquifers.

For better price realisation, farmers need to make decisions based on prices likely to be available after harvest.

The Government should also create an institutional mechanism, with participation of all Ministries concerned, to develop appropriate policies and practices for price and demand forecast; use of futures and options market; expansion of warehouse depository system and to take decisions about specific export and import-related measures.

Though more than 86 per cent of India’s farmers are small and marginal, they are not always in a position to directly transact at Agriculture Produce Market Committees (APMCs) and other wholesale markets. Therefore there is a need to develop and upgrade rural markets into Gramin Agricultural Markets (GrAMs). Also, the Government should work on strengthening the electronic National Agriculture Market (eNAM), an online trading platform for agricultural commodities.

India has mastered all systems for crop production, including loans for growing crops. But as crops are perishable items if they are not sold on time, pressure starts mounting on farmers. This pressure leads to distress sale.  Now, the focus must shift to credit for post-harvest, which can stop distress sale by farmers.

As India is primarily an agriculture-based country, our districts can specialise in some or other agricultural produce and be known for it. But special attention is lacking in this regard. There is a need to develop cluster-based models in a scientific manner for identified agriculture produces in our districts in the same manner as we have developed models for the industrial sector.

Cultivation of horticulture crops in clusters brings advantages of scales of operations and can spur establishment of entire chains from production to marketing, besides giving recognition to the districts for specific crops.

India’s farm export potential is as high as $100 billion against the current exports of $32-35 billion. If these suggestions are incorporated, we will achieve the $5 trillion economy target ahead of time.