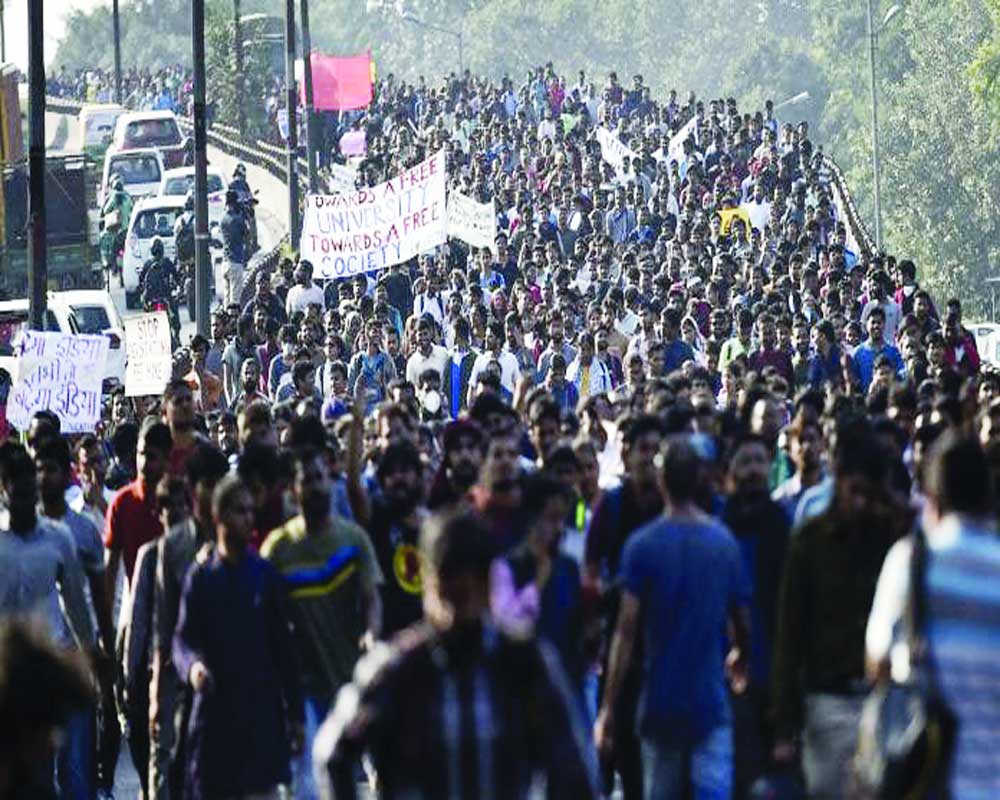 Student movements have had transformative and revolutionary power in world history, from 13th century Paris to the climate activism of Greta Thunberg. That’s how our societal and education systems have raised our young to be, question the status quo if it is unjust, create a liberal order, chase passions and ideals that are yet uncorrupted by politics and do so with a “can do” spirit that has not yet been bartered away to compromise. That’s why students have overturned regimes across the world, because all they need is a generational contiguity to override everything else and generate a populist swell. At home, the Nirbhaya and Jessica Lal vigils, Dalit or gay rights would not have changed outcomes had the students not taken the lead. And they have all begun as non-violent, peaceful sit-ins and marches till retaliation was forced by State repression. However, one must cite the college students versus Government protests in Iran of 1999 during which  Ayatollah Khamenei had to instruct the police to restrain itself even if it meant that students burnt his posters or tore them apart. This was remarkable in a regime intolerant of any kind of alternative discourse or dissent but Khamenei was aware that student activism had freed itself from State fear and politics and in the long-term could be a challenge if not accommodated. Suppression would only beget harsher rejection and counter-reaction. Therefore, such pragmatism should have also dawned on authorities in New Delhi before they used the police to literally beat up protesting JNU students wanting to march to Parliament and be heard on a surprise fee hike. Cracking down on them mercilessly has not only emboldened them further but shown up the Modi Government as a bulldozer of what JNU stands for, an institution of excellence and learning that attempts classlessness in thought and action, encourages free and radical thinking and a convergence of ideas fearlessly. The ostensible row over a fee hike has taken a back seat due to such mishandling. The Modi Government has clearly overlooked the practicality of raising fees and used it as a ruse to suppress what it really wants, take over and crush a seat of Left-leaning liberalism, one that its proponents dismiss as a despicable clan called “JNU type.” Particularly, malign a university that bears the name of India’s first Prime Minister. The Government is making a classic mistake of resorting to symbolism. Negotiations could have taken care of much of the problem. But the suddenness of the fee hike was clearly meant to provoke students and make them look like perennial trouble-makers who needed to be taught a lesson. The students’ angst over the almost 300 per cent hike is understandable as it’s astronomical and insensitive, instead of being graded and phased out as all transitions to a new protocol should be. For long, JNU has been offering succour to the poorest of families, who could not afford a respectable education for their children due to the hefty fees charged by other eminent institutions. It is also a fact that JNU had been operating under a differential fee regime compared to its counterparts. A room rent of just Rs 20 per month for a single-seater or Rs 10 per month for a double seater, that, too without any utility or service charge, is a dream in the heart of Delhi. This is the reason why students prolonged their stay at the hostels, enrolling in course after course while working part-time. Old students overstaying led to a chronic hostel shortage for newcomers. In this sense, it is welcome that the varsity has finally woken up to the dangers of big subsidies. Yet it must be accepted that a steep hike, coming after 19 years, is an injustice when not reasonably executed. No consultations were made with the stakeholders or the management council to arrive at a common ground. The partial rollback, again swiftly ordered, was cosmetic, according to students. And clamping them down with police action frankly gives more credence to their story of persecution than issues that matter.

Going by the recent past, students have won — those at Jadavpur University forced their Vice-Chancellor to resign, FTII students challenged the appointment of chairman Gajendra Chauhan and women students across the country began the Pinjra Tod movement when Jamia Millia Islamia cancelled late nights for its girl hostellers. The Government may want to compartmentalise every part of our public life, saffronising education being a big part of it. Even if we were to follow the spirit of Vedanta truly as it wants, then we would realise that “each man is the power. There is no king. I see everybody equally the same.” That’s why Professor Firoz Khan of Banaras Hindu University may be a celebrated Sanskritist, who received awards in his subject, but is now considered untouchable.