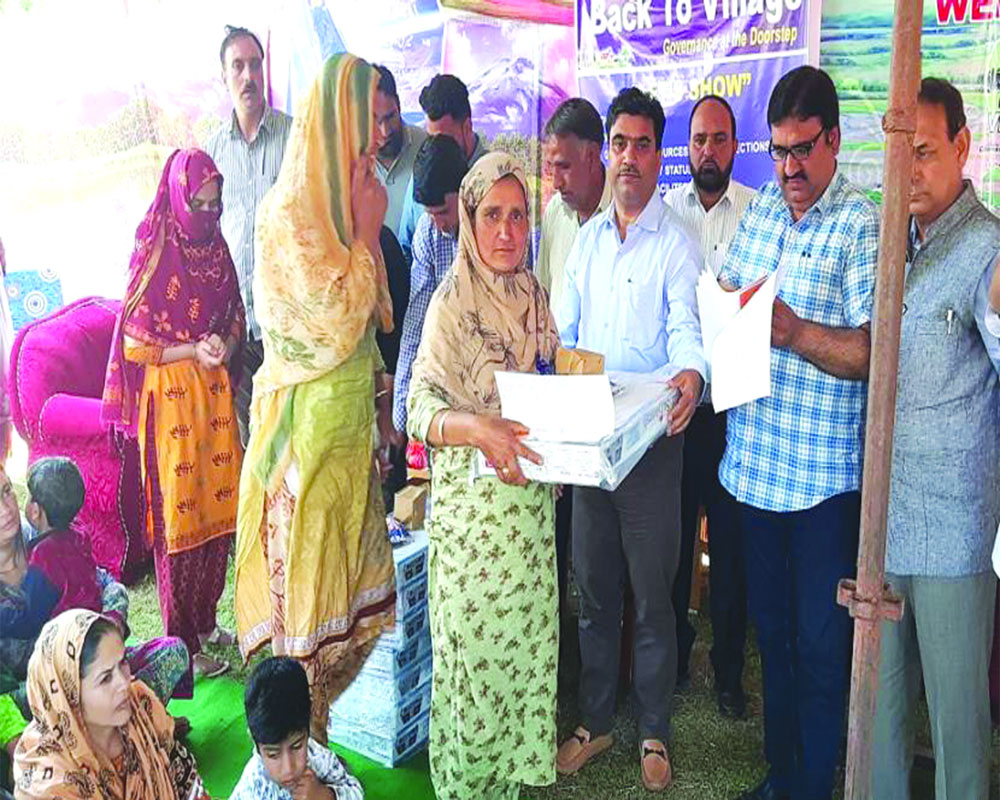 Although Jammu and Kashmir is under President’s Rule, the developmental projects initiated by Governor Malik are at least enabling a new dialogue at the village and community level

Most people in Jammu & Kashmir are rejoicing at the extension of President’s Rule for another six months. It is not normal that people want Central rule to continue. In fact, they eagerly await the return of a popular Government for obvious reasons. However, Jammu & Kashmir is an exception and special in this regard because under the garb of Article 370, the State has been subjected to the worst kind of governance. The border State has been a victim of not only cross-border terrorism, militancy and backwardness but also poor governance. The last is among the many problems that plague Kashmir, which also suffers from political and religious radicalisation.

A total disconnect exists between the three regions of the State. For the lust of power, political parties have tried to divide the State in order to garner votes rather than uniting them. Emphasis has been on creating more administrative units rather than ensuring a responsive administration. Confidence-Building Measures (CBMs) announced from time to time, to address the turmoil in Kashmir, have at best been cosmetic in nature — more for appeasement and less for effect. These further widened the gulf between the three regions. Rather than addressing public-related issues, the administration was busy promoting dynastic rule in the State. The net result was severe disappointment among the people and grave dejection due to an unresponsive administration and the “couldn’t care less” attitude of the political bosses. “Exclusivity” rather than “inclusivity” was the norm with successive elected Governments since they had so manipulated the power structure in the State that the Valley became the centre of power while Jammu and Ladakh became subservient to Kashmiri dominance. Leaders of these two regions virtually resigned to their fate and accepted Kashmiri patronage as the norm. A majority of the population in Kashmir was disenchanted with such leadership because huge financial packages given by the Centre for the development of the State were plundered as leaders were more interested in filling their pockets as well as those of their cronies and favourites.

People started losing faith in elected Governments. Moreover, the “anti-India” narrative created fissures among Kashmiris. Nationalist voices bravely faced the challenge posed by separatist and extremist forces. Kashmir-centric political parties depend to a large extent on the latent support of the Hurriyat and Jamat-e-Islami Kashmir. Hence, rather than concentrating on fair, clean and responsive administration, they were busy flirting with the separatists and extremists, putting the  agenda of governance on the back burner.

The Modi Government at the Centre was keenly observing the happenings in the State. Packages worth thousands of crores were announced by the Prime Minister for developmental purpose. Still, the three regions of the State were not making much headway due to inept bureaucratic handling and inadequate political control. Corruption, bureaucratic inertia and absence of proper governance were not only fuelling turmoil in the Valley but the other two regions were getting alienated, too. It was this hopelessness that led a majority of the people to welcome their first-ever career politician as Governor. The Modi Government’s decision to break the well-established practice of appointing an Army-General or a bureaucrat as Governor of the State by a career politician evoked mixed responses. Power brokers, who felt threatened, made a lot of hue and cry and termed the move as “political manipulation” as elections were approaching. They misinterpreted the intent of the Modi Government, which had decided to showcase to the people of the State what good governance meant and let them have a first-hand experience of a responsive administration. Peace and development were the two cornerstones of the Union Government’s policy for Jammu & Kashmir. Governor Satya Pal Malik was tasked to win hearts and minds of the people through good governance under the watchful eyes of the Prime Minister and the Home Minister. The mandate to the Governor was unambiguous with instructions to deliver.

Along with his team of advisors, Malik began work from day one. He introduced a number of administrative reforms, which were welcomed by the people. It was evident from his initial actions that the thrust of the Government would be not only on “delivery” but also rooting out rampant corruption. The State Administrative Council (SAC), under the chairmanship of the Governor, began with rejuvenating the projects sanctioned under the Prime Minister’s development package of Rs 80,000 crore and took landmark development initiatives and decisions to put various projects on track by removing administrative bottle necks.

The next major initiative was the creation of the Jammu & Kashmir Infrastructure Development Corporation (JKIDC), under which the Government raised a capital of Rs 8,000 crore to give a major thrust to infrastructure and languishing projects. Approved projects are to be completed in 18 months, with time-bound monitoring. Talks have also begun on fresh loans from the Asian Development Bank for new developmental projects. The Shahpurkandi dam project and the Ujh Multi-purpose project, which were lying in limbo for 40 years, have been revived. The twin projects will not only make the State self-sufficient in electricity but will prove to be a game-changer as far as the Kandi (dry and arid) belt of the Jammu region is concerned. They will convert the region into a green belt with irrigation facilities. A number of hydro-electric projects in Jammu region have also been sanctioned.

As far as administrative reforms, empowerment of the people and strengthening of democratic institutions (jamhooriyat) is concerned, Jammu & Kashmir is witnessing a new era under President’s Rule. Grassroot-level democracy has been established for the first time as panchayat and local bodies’ elections are held successfully. These institutions were financially empowered to address the issues faced by the common man. The Government’s assurance to hold elections to Block Development Councils (BDC), too, is welcome. In order to meet the aspirations of the people of Ladakh, who always felt neglected, the SAC has empowered the two Hill Councils, both administratively and financially. The hallmark being non-lapsable annual budget, the unspent portion of which could be carried forward to the next financial year.

Many structural and administrative reforms have also been launched to make the administration responsive and accountable. Anti-corruption measures include the first-ever Anti-Corruption Bureau (ACB), established to effectively tackle and eliminate corruption from public institutions. The Jammu & Kashmir Vigilance Commission Act, 2011, was amended to make it more vibrant and effective and the Prevention of Corruption Act, too, was amended to give it more teeth. The war on corruption unleashed through the action taken by ACB against the top-level management of the J&K Bank, which had become a den of corruption, favouritism and nepotism, has sent a wave of unprecedented joy among the public. The administration has successfully conveyed the message that the corrupt, however mighty he/she be, will not be spared.

The administration has also addressed the vital issue of unemployment. Many reforms have been introduced to make recruitments transparent and speedy, cutting down red tape as well as interviews. Around 42,211 posts have been generated for employment. Employees’ welfare has been taken care of by hiking remuneration of anganwadi workers, substantial hike has been announced in honorarium of SPOs — a morale booster for 32,000 of them. The ex-gratia for next of kin of slain police personnel has been substantially hiked and the Government will bear their education costs up to class  XII. Addressing the aspirations of the youth in the State still remains a big challenge for the government.

In addition to reach the last man in line, many measures for social inclusion as well as relief, rehabilitation and welfare measures were instituted by the Government.  The largest ever public outreach programme was launched through the innovative idea of ‘Back to Village’. This ambitious programme has generated hope among the villagers that with the administration coming to their door step, their development needs will be addressed. Hope the unprecedented success of this programme will encourage the Government to launch a similar programme for towns and urban areas. There is a sense of hope and relief among the masses. The process of winning hearts and minds through good governance has begun in the right earnest. People are hopeful that peace will be achieved through development, provided the Government does not relent in its ‘zero tolerance policy’ against the terrorists and those who form part of the terror support network and terror funding.

(The writer is a Jammu-based political commentator, columnist, security and strategic analyst)